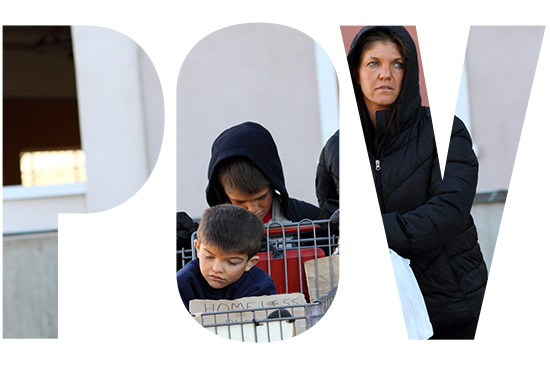 Earlier this year, Ben Carson, retired neurosurgeon and current head of the Department of Housing and Urban Development, went on record with his beliefs about the causes of poverty. Carson rejected the possibility that individuals may find themselves poor because of large-scale structural forces—like a labor market that no longer contains middle-skill, middle-wage jobs, the fact that women are paid less than men for the same work, or the nation’s choice to pursue mass incarceration as the means for addressing its social problems. Instead, he embraced the idea that poverty is the consequence of a bad “state of mind,” stating, “You take somebody that has the right mind-set, you can take everything from them and put them on the street, and I guarantee in a little while they’ll be right back up there….You take somebody with the wrong mind-set, you can give them everything in the world—they’ll work their way right back down to the bottom.”

The moral construction of poverty has influenced how we treat the poor in this country. We have made the programs designed to help the poor meet their basic needs extremely punitive and intensely invasive. Poor mothers might be one of the most regulated groups in society, and this is, in part, a result of the moral construction of poverty. It makes sense, though: if poverty is the result of individual moral or behavioral shortcomings, then poor mothers ought to be supervised closely, as their personal failures necessarily affect children.

And that is precisely what public assistance programs do to poor mothers: they supervise them closely. The pregnant woman who turns to her state’s Medicaid program for help in accessing prenatal health care will find that in exchange for government assistance, she will have to open up all areas of her life to scrutiny. The state will gather a vast quantity of information about her—including information about her eating habits, her employment history, the status of her relationship with the father of her child, her history with sexual or intimate violence, any history that she has with drug use or abuse, and the identities of the people with whom she lives and her relationship to them. Once her child is born, the woman will oftentimes find herself regulated (or living under the threat of regulation) by her state’s Child Protective Services department, the government agency that investigates incidents of child maltreatment. Moreover, the state will use its benefits programs to influence her procreative choices—coercing her into or out of bearing children, according to the needs or desires of the state.

Now, some will say that there is nothing wrong with the state supervising poor mothers closely. They will say that the state is simply interested in protecting children from abuse and neglect. But we have to ask: why is the state so convinced that the children born (or to be born) to poor women are so in need of protection that it has erected elaborate, intrusive bureaucracies to accomplish that task? In other words, why does the state presume that poor mothers are at risk of abusing or neglecting their children?

This is telling. It suggests that the state is not really interested in protecting children generally from abuse and neglect. Instead, it is only interested in protecting some children from abuse and neglect. That is, the state assumes that only some children need to be protected from their mothers. And those children are the ones that are born to poor women. Why does the state make this assumption about poor women? It cannot be because poor women engage in problematic behaviors and have problematic histories; wealthier women do, too. It has to be because of something else. This “something else” is the moral construction of poverty.

It is only when we as a society accept that poverty and being poor do not invariably have their origins in individual character flaws that we will treat poor mothers with the dignity and respect they deserve. That will be a great day, as we will be closer to establishing a nation that lives up to the promises of equality contained in its founding documents.

Khiara M. Bridges, a School of Law professor of law and a College of Arts & Sciences professor of anthropology, is the author of Reproducing Race: An Ethnography of Pregnancy as a Site of Radicalization (University of California Press, 2011). Her latest book, The Poverty of Privacy Rights (Stanford University Press, 2017), explores the moral construction of poverty and the effects it has on poor mothers’ privacy rights.  She can be reached at kmb73@bu.edu.

The School of Law will host a symposium, free and open to the public, to discuss Bridges’ new book on Monday, November 20, from 12:45 to 2 p.m. in LAW’s Barristers Hall, 765 Commonwealth Ave.

POV: Stop Blaming the Poor for Their Poverty

There are 10 comments on POV: Stop Blaming the Poor for Their Poverty

POV: Stop Blaming the Poor for Their Poverty
10
share this