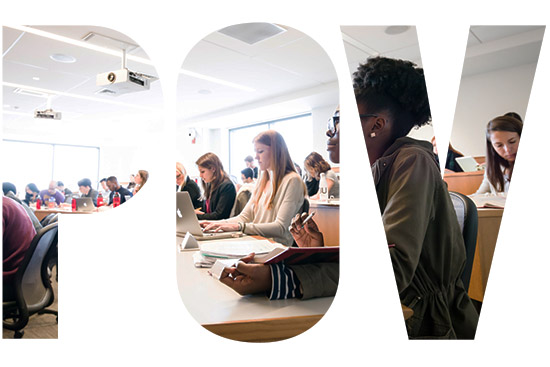 It’s easy to see why most handicappers of the competition for Amazon’s second headquarters put Boston high on the list of likely winners. It’s the same reason that General Electric decided to move its headquarters to Boston last year. Boston is the country’s capital of higher education. The area’s dozens of colleges and universities yield an eager workforce with the depth and breadth of skills required by 21st-century business.

One recent survey, by the London-based weekly Times Higher Education, found that 3 of the top 10 schools graduating the world’s most employable grads are along the Charles River. The 2017 survey, which asks business leaders around the world to rate the employability of graduates of 150 universities in 33 countries, puts Harvard in second place, MIT in fourth, and Boston University in sixth. By any standard, Boston’s workforce is primed for Amazon.

Harvard and MIT are long-standing residents of such lists. BU is not, and its newfound status is not an accident of fate. The University has invested years of effort and millions of dollars identifying and embedding in our programs and our teaching the critical skills needed to build the businesses of the future.

From a business perspective, Amazon’s or others, you’d think we’d want more graduates in the higher education pipeline, not fewer. Higher education is, after all, the business behind business, and it becomes more important every year. Professional competency, communication skills, critical thinking, collaboration, creativity, social and cultural awareness, and leadership are all qualities sought by employers. They are the DNA of businesses of the future, and they are the product of higher education.

So it’s strange and alarming that the tax plan before Congress will make higher education skills more expensive, and less accessible, to more people. For example, the version of the bill passed by the House hinders higher education in several ways: it levies a new tax on large private college endowments; it ends tax deductions for student loan payments; it taxes the value of the tuition waivers that make graduate school possible for the next generation of gifted scientists, engineers, and academic teachers; and it increases the tax burden for employees who take advantage of an employer’s tuition assistance, making is less likely that employees will take advantage of the education opportunity afforded by their employer. It also reduces the number of taxpayers who itemize their deductions, which will likely lead to a decline in donations to nonprofit entities of all kinds.

The architects of the tax plan chose to discount the importance of higher education in favor of an opportunity to indulge the growing number of Americans who doubt the value, and question the mission, of universities and colleges. A Pew Research poll published in July, for example, found that 58 percent of Republicans and Republican-leaning independents believe colleges have a negative effect on the country. And a recent Wall Street Journal/NBC Newspoll  found that only 49 percent of Americans think a four-year degree will lead to a good job and higher lifetime earnings, while 47 percent do not.

When it comes to Amazon and where it sites its new headquarters, it’s easy to say none of that matters. Jeff Bezos knows the value of education as well as anyone. He will build his second headquarters in a place where there is a critical mass of educated workers and where this workforce wants to live and raise their families. But the denigration of higher education does matter, because the competition we face is bigger than Amazon. The competition is a global competition for competitiveness itself. It’s about innovation, critical thinking, and an educated, responsible citizenry. Those are the other products of the business behind business, and they are assets we cannot afford to lose.

Robert A. Brown is president of Boston University. This opinion piece was originally published in the Boston Globe on November 30, 2017.

“POV” is an opinion page that provides timely commentaries from students, faculty, and staff on a variety of issues: on-campus, local, state, national, or international. Anyone interested in submitting a piece, which should be about 700 words long, should contact Rich Barlow at barlowr@bu.edu.

POV: Amazon Needs Higher Education. So Does Everyone Else

There are 11 comments on POV: Amazon Needs Higher Education. So Does Everyone Else

POV: Amazon Needs Higher Education. So Does Everyone Else
11
share this