“Science has to work together with government and business for the continued improvement of the quality of life of the human population, now and in the future,” Nobel Laureate Mario Molina (Hon.’17) told those at BU’s Baccalaureate Service at Marsh Chapel May 21. Molina served on the President’s Council of Advisors on Science and Technology under President Barack Obama. Watch the entire speech in the video above.

Mario Molina, a Nobel Prize–winning scientist and longtime advocate for climate change control, spoke about the critical role of science in society, as well as the need to pursue one’s future work with passion, in an inspiring Baccalaureate Address to the Class of 2017 at Marsh Chapel Sunday morning.

Later in the day, Molina was awarded an honorary Doctor of Laws during BU’s 144th Commencement at Nickerson Field.

The Mexican-American professor and University of California, San Diego, researcher spoke before a rapt audience at Marsh Chapel and was enthusiastically applauded for his remarks. President Robert A. Brown, Jean Morrison, University provost, Robert Allan Hill, dean of Marsh Chapel, Kasey Shultz (CAS’17), and Ian Quillen (CAS’17) also addressed the graduates and their families. Scott Allen Jarrett (CFA’99,’08), the chapel’s director of music, led the Marsh Chapel Choir in the powerful African-American spiritual “My God Is a Rock,” and BU’s school anthem, “Clarissima.”

Molina, colleague W. Sherwood Rowland, and Paul J. Cruzen of Germany’s Max Planck Institute for Chemistry, were awarded the 1995 Nobel Prize in Chemistry for their work in atmospheric chemistry, particularly concerning the formation and decomposition of ozone. Their research on the dangers of chlorofluorocarbons, or CFCs—man-made chemicals used to cool refrigerators and in aerosol sprays and plastic foams—led to the 1987 United Nations Montreal Protocol on Substances That Deplete the Ozone Layer, an international agreement that reduced and eventually banned CFCs. Molina is UC, San Diego, Distinguished Professor of Chemistry and Biochemistry, with a joint appointment in the Center for Atmospheric Sciences at its Scripps Institution of Oceanography. He is also head of the Mario Molina Center for Strategic Studies in Energy and the Environment in Mexico City.

Scientific advances have drastically improved life for the Earth’s population in recent times, Molina said, noting that life expectancy has more than doubled in the past 50 years, airplane travel is common and safe, and much of the world communicates via cell phones. 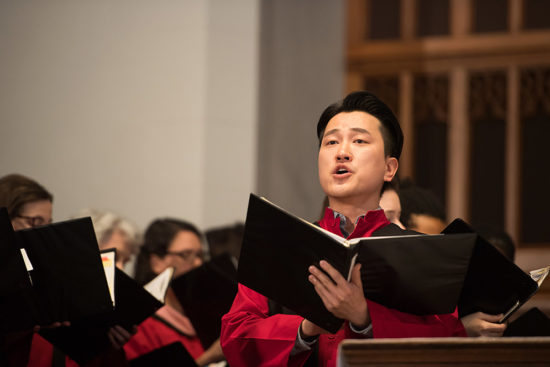 Marsh Chapel Choral Scholar Junhan Choi performed a solo during the Marsh Chapel Choir’s rendition of “My God Is a Rock” at Sunday’s Baccalaureate Service.

However, as civilization progresses, he said, it is crucial for “societal policies to be based on accepted ethical values, as well as to be consistent with accepted science, rather than to be based on irrational beliefs that disagree with science itself and that favor only a selected portion of the population.”

He warned against giving credence to people who push back against vaccines or deny the dangers of the issue he has studied for most of his life—climate change. He stated that the probability that most of the Earth’s recent climate changes have been caused by human activities, primarily the use of fossil fuels, is more than 95 percent.

“With the help of science, we can estimate the probability that the average temperature of the planet will increase to a certain extent in a certain time period,” said Molina, who was awarded a Presidential Medal of Freedom and served on the President’s Council of Advisors on Science and Technology under President Barack Obama. “A very worrisome projection is that there is a roughly one in five probability that with a business as usual scenario—if society ignores climate change—the average surface temperature of the planet might increase 5 or more degrees Celsius [41 degrees Fahrenheit] towards the end of the century, with potentially catastrophic consequences for civilization.”

He predicted that if nothing is done, parts of the planet would become uninhabitable, global food production would be affected, and massive migrations would occur. But thanks to modern technology, this can be prevented. “Science has to work together with government and business for the continued improvement of the quality of life of the human population, now and in the future,” he said.

Directly addressing the members of the Class of 2017 about to enter the workforce, Molina encouraged graduates to choose the activities and work they enjoy doing most, and to pursue them with passion. He touched on the reality that automated systems are eliminating jobs and older workers will be replaced by younger ones. “The notion that what you learned in college is sufficient for your future work was an acceptable point of view in the past, but it is no longer valid,” he said. “You have to continue to learn throughout your career. This means perhaps the most important skill you should have acquired in college is how to learn, how to become motivated to keep learning—that is, how to become a lifelong learner.”