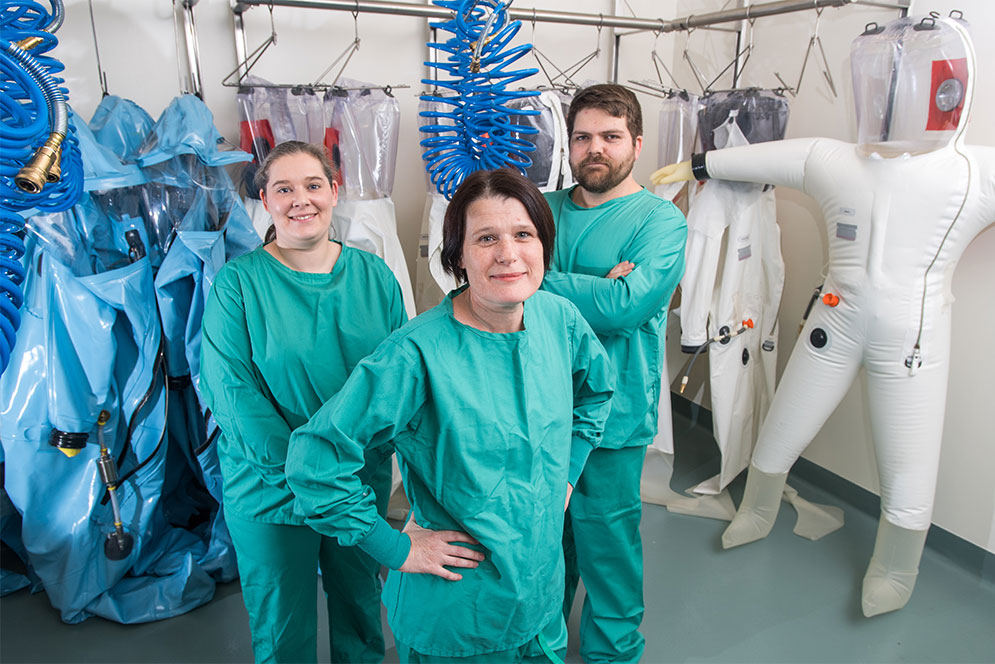 NEIDL microbiologist Elke Mühlberger (center), one of the world’s leading researchers on the Ebola and Marburg viruses, senior research scientist Judith Olejnik (left), and research scientist Adam Hume are eager to get to work in the NEIDL BSL-4 lab. Photo by Cydney Scott

“We’re extraordinarily pleased,” says NEIDL director Ronald B. Corley, a School of Medicine professor of microbiology. The BSL-4 lab, on BU’s Medical Campus in the South End, was built according to the most stringent safety specifications set by the US government for infectious disease research. Corley says the BPHC permission is “the last hurdle for our scientists being able to work with approved BSL-4 pathogens—specifically, Ebola and Marburg.” Ebola and Marburg are both rare but life-threatening viruses that have become global public health threats. There is no available FDA-approved vaccine or therapy for Ebola, which killed and sickened tens of thousands of people in West Africa in a 2014–2016 outbreak, or for Marburg. Ebola cases traveled to the United States and Europe during the 2014 outbreak.

“As we have seen over the past several years, we are all vulnerable to potentially devastating infectious diseases that may have originated halfway across the globe,” says Gloria Waters, BU vice president and associate provost for research. “With the opening of the NEIDL’s BSL-4 lab, BU is poised to establish itself as a national leader in fighting microbial systems and infectious diseases. The work that will be carried out here will bring benefit and relief in the form of vaccines, treatments, and cures to people in Boston, the United States, and around the world.”

The NEIDL, where multidisciplinary teams of microbiologists, virologists, engineers, and other scientists have been doing research at BSL-2 for five years and at BSL-3 since January 2014, is part of a national network of secure facilities that study emerging infectious diseases and develop diagnostic tests, treatments, and vaccines to promote public health. There are 11 BSL-4 labs across North America—10 in the United States and one in Winnipeg, Canada. The NEIDL BSL-4 lab is one of only two labs sited within universities in the United States—the other one is at Galveston National Laboratory, at the University of Texas Medical Branch—and Corley says the NEIDL lab is the only one “in the middle of a very research-intensive university like BU” and in “a mecca for biomedical research like the Boston area.”

One important benefit of the location, says Corley, is that NEIDL researchers can draw on the expertise of multidisciplinary teams of scientists—engineers, chemists, biologists who work on regenerative medicine—across BU, and at other institutions in Boston.

Last December, after more than three years of review, BSL-4 research at the NEIDL was approved by the Centers for Disease Control and Prevention (CDC). All BSL-4 research conducted at the NEIDL must also be approved on a case-by-case basis by BU’s Institutional Biosafety Committee, which was created under National Institutes of Health guidelines to review research involving biohazardous materials.

Waters says that while the NEIDL has received the permit to conduct BSL-4 research, approval and review of the work in the BSL-4 lab will be ongoing. “Every project is scrutinized and continuously monitored by multiple local and federal agencies,” she says. “The details of all of our research proposals are available to the public. I take our commitment to safety and transparency extremely seriously, as does every one of my colleagues and staff and faculty members.”

Corley says his team—scientists, administrators, security personnel, environmental and health and safety officials, community relations representatives—has emphasized transparency concerning research at the NEIDL. “We’re not going to do anything in secret,” he says. “We’re going to tell people what we are doing.” Corley says he and others have offered close to 200 tours of the 192,000-square-foot, 7-story facility, with 2,400 participants—public officials, the media, members of the community—and that doesn’t include the many visiting scientists from other institutions. Corley says the NEIDL’s Community Liaison Committee, which facilitates communication between the NEIDL and the community and comprises residents from the South End, Roxbury, Dorchester, East Boston, and Cambridge, has recently been expanded to 17 people.

“As we have seen over the past several years, we are all vulnerable to potentially devastating infectious diseases that may have originated halfway across the globe. With the opening of the NEIDL’s BSL-4 lab, BU is poised to establish itself as a national leader in fighting microbial systems and infectious diseases.”—Gloria Waters

NEIDL microbiologist Elke Mühlberger, who came to BU nine years ago from the BSL-4 lab at Germany’s Philipps University of Marburg, is one of the world’s leading researchers on Ebola and Marburg viruses—the latter named for the city where it was identified. Now that the BPHC has granted approval, Mühlberger, a MED associate professor of microbiology, can take the necessary steps to begin work on the BSL-4 lab’s first approved project in collaboration with BU’s Center for Regenerative Medicine stem cell biologist and tissue engineer Gustavo Mostoslavsky, a MED associate professor of medicine and microbiology. “We still don’t understand why Ebola virus is so lethal for humans,” Mühlberger says. “This project is about establishing novel infection platforms that mimic the pathology of these viruses in humans. Understanding how these viruses devastate particular organs will help us to come up with treatment options.”

“To my knowledge, no one has done this before,” says Corley. “It brings us closer to really understanding why these pathogens are so deadly.” And understanding the pathogens brings Mühlberger and the NEIDL team of multidisciplinary scientists closer to finding ways to prevent and treat the viruses.

Currently, there are two experienced BSL-4 researchers at the NEIDL working with Mühlberger on her project: research scientist Adam Hume and senior research scientist Judith Olejnik. “We have worked hard to get the BSL-4 lab up and running,” Mühlberger says. “However, now that all approvals have been obtained, the real work begins and we are excited to take it on.”

Mühlberger says the BSL-4 team has already come up with a list of the most important experiments to perform once the lab is operational. Because of the required BSL-4 safety precautions, which have all been described by NEIDL scientists and security officials at public hearings, it will probably take another one to two months to begin the actual hands-on BSL-4 work. Mühlberger now has to obtain the Ebola and Marburg viruses from other CDC-approved BSL-4 labs—a process that must follow rigorous inspection, safety, security, and transportation rules.

Corley says the NEIDL’s BSL-4 lab is one of the most carefully designed and constructed buildings of its kind in the world. It has its own filtration, decontamination, and waste disposal systems and special engineering features that prevent microorganisms from being released into the environment. Researchers wear protective, air-supplied, full-body suits and undergo extensive training in handling hazardous infectious agents.

The work being done throughout the NEIDL is closely interconnected. Although special training and approvals are required for all Level 4 work—where Mühlberger, Hume, Olejnik, and other scientists in pressurized space suits will study the deadliest pathogens—the work done at other levels supports those efforts. “Developing the technology to learn a pathogen’s genetic makeup and how it invades the body’s immune system is a step-by-step process,” says Mühlberger. “Technologies established at BSL-2 can be applied to higher containment levels up to and including BSL-4.”

“All the parts of the jigsaw fit together,” says NEIDL virologist Paul Duprex, a MED professor of microbiology, who studies measles and mumps viruses. “That’s one of the strengths of this building—scientists can work at BSL-2, -3, and -4.”

Duprex has been doing preparatory work for a project on the Nipah virus, which he says will go forward at the NEIDL BSL-4 lab after the necessary approval and permitting process.

NEIDL researcher John Connor, a MED associate professor of microbiology, has been collaborating with BU engineers and other scientists to develop tools for early detection of emerging infectious diseases. “I’ll be so happy to have this building finally fulfill the function for which it was built,” he says. His research on a diagnostic for Ebola, Marburg, and Lassa fever, which are all BSL-4 viruses, has meant working with scientists at other BSL-4 facilities in the United States, such as the Galveston National Laboratory or the US Army Medical Research Institute of Infectious Diseases at Fort Detrick, in Maryland.

“I came here in 2007 with the idea of being able to work with people at higher levels of containment in order to be able to make an impact as quickly as possible,” Connor says. “So it’s great to finally be looking at the possibility of really doing that.