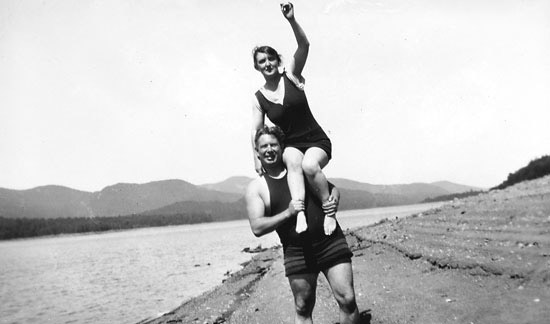 William Moulton Marston hoisting his bride, Elizabeth Holloway Marston (LAW 1918), during a summer vacation in New Hampshire in 1916. She served as muse for her husband’s creation of Wonder Woman, which debuted in 1941. Photo courtesy of Moulton “Pete” Marston

Wonder Woman, Warner Bros.’s latest incarnation of the DC Comics female superhero, opens nationwide today, the most anticipated film of the summer, according to a recent survey by Fandango, besting other anticipated blockbusters like Spider-Man: Homecoming and Thor: Ragnarok. The film is expected to gross as much as $90 million this weekend, likely making it the most successful female-focused superhero film of all time.

And while much of the buzz has been centered on its star, Israeli actor Gal Gadot, few are aware that the original Wonder Woman is believed to be modeled on BU alum Elizabeth Holloway Marston (LAW 1918), who graduated nearly a century ago. When Harvard-schooled lawyer and academic William Moulton Marston was planning to build a comic book series, it was Elizabeth Marston who suggested to her husband that the superhero should be a woman. William Marston, who was already famous for inventing the polygraph, chose the nom de plume Charles Moulton for the comic book, and in 1941 he published the first episode of Wonder Woman, which had the immortal 5,000-year-old Amazon princess, daughter of Zeus and Hippolyta, in her alter ego of Diana Prince, rescue a US Army Intelligence officer.

Elizabeth’s daughter, Olive Ann Lamotte, has few doubts that her mother was the model for the first female superhero. In a 2001 Bostonia article, she described her mother as “a small package of dynamite,” and points out that she lived to be 100 (she died in 1993).

Warner Bros. is hoping that its film also has a long and lucrative life, and it could happen. Critics are calling it the best film to date featuring a DC Comics character. “Wonder Woman is leavened by touches of screwball comedy, espionage caper, and romantic adventure,” A. O. Scott writes in a New York Times review. USA Today calls it “an action film, a romantic comedy and a coming-of-age story and a period piece and a war movie all in one.” And Entertainment Weekly says the movie is “smart, slick, and satisfying in all of the ways superhero films ought to be.”

Set against the backdrop of World War I, the film takes viewers back to the beginning of Wonder Woman’s story on the island of Themyscira. She leaves home for London after a US military pilot, played by Chris Pine, washes ashore and tells her about the events taking place in war-torn Europe. The film was directed by Patty Jenkins, the first woman, appropriately, to direct a major studio superhero genre film. Jenkins has already expressed interest in doing a sequel.

As for the real-life woman who inspired the creation of the Amazon princess, given the times, her story is also unconventional. After earning a law degree from BU (“Those dumb bunnies at Harvard wouldn’t take women…so I went to Boston University,” Marston told the New York Times in a 1992 interview), she went on to get a master’s degree from Radcliffe in 1921. She worked her entire life, lecturing at American and New York Universities and working as an editor at Encyclopædia Britannica and McCall’s magazine before going to work as assistant to the chief executive of Metropolitan Life Insurance Company in New York, where she remained until she was 65.

Her personal life was even more unorthodox. She and her husband formed a ménage à trois with her husband’s former student Olive Byrne, who bore two of his four children. The Marstons had adopted Byrne’s two children, and after Marston’s death in 1947, Elizabeth put her own children and Byrne’s two through college. She and Byrne continued living together until the latter’s death in the late 1980s.