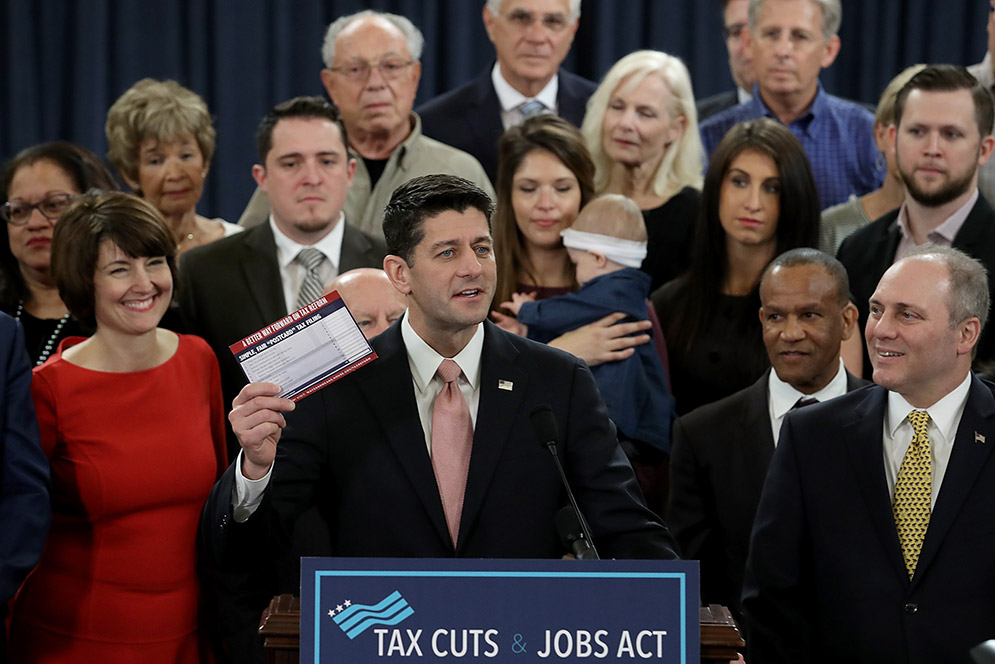 Speaker of the House Paul Ryan (R-Wis.), with American families and members of the House Republican leadership, introducing tax reform legislation November 2. The legislation is a centerpiece the Trump legislative agenda. Photo by Win McNamee/Getty Images

The tax legislation proposed last week by congressional Republicans has alarmed college and university administrators across the country, who argue that it would eliminate education assistance currently in the tax code, raising the cost of education and tightening access to it.

The proposed bill would repeal tax deductions for undergraduate and graduate tuition for all employees, from professors to groundskeepers. Other benefits on the chopping block include the deduction graduates receive for the interest on their student loans and the ability of private universities to use tax-exempt bonds for constructing academic facilities and dormitories, among other changes. The bill also would increase universities’ taxes and certain costs, putting more pressure on student tuition.

“We oppose proposals that make it costlier for all students to attend college,” says Emily Alves Burlij, BU’s associate director for federal relations. “Taxing tuition benefits and making it more expensive for universities to operate clearly does that.”

The Association of American Universities (AAU), an organization of 62 leading US and Canadian research universities that BU belongs to, has issued a statement warning that the bill “will make higher education less affordable and less accessible to middle- and low-income Americans. This bill will have dire consequences for Americans who rely on research universities for undergraduate and graduate education, and to conduct cutting-edge research that results in life-saving medicines and innovative technologies that bolster our national defense and economic competitiveness.”

“This bill would have devastating consequences for students,” says Matthew Owens, AAU vice president for federal relations and administration. “It seeks to generate revenue for tax cuts on the backs of students.”

Congressional Republicans and President Trump defend the tax changes, saying they would help provide increased tax revenues to pay for the bill’s lower corporate taxes, which the GOP believes would boost investment and rev up the economy.

The bill would also cut taxes on some middle-class Americans, although independent analysts say most of its benefits would go to wealthier taxpayers.

Among the bill’s provisions for higher education:

“Taxing tuition benefits would be a significant financial burden for our employees,” says Diane Tucker, the University’s chief human resources officer. “The financial implications of the proposed tax change could limit who can access this benefit and impact our ability to recruit high-quality staff.”

*Student loan interest deduction. By eliminating the current deduction, the bill would make it more expensive for college graduates to pay back their student loans.

*Tax-exempt bond financing. Private universities like BU now can use tax-exempt bonds for construction. The bill would eliminate that allowance, which “will increase significantly the cost of borrowing for important capital projects like residence halls and instructional buildings, creating additional pressure on future charges for tuition and housing,” says Martin Howard, BU senior vice president, chief financial officer, and treasurer.

*Endowment excise tax. The Republican bill would levy a 1.4 percent tax on the investment income of private college endowments that exceed $250,000 per student. While endowments are now not taxed, on the grounds that they are part of colleges’ nonprofit operation, sponsors of the bill say they have grown at the same time that universities have raised their tuition and saddled students with heavy debt.

BU’s $1.9 billion endowment currently would not be subject to the tax. But “we are troubled by the idea of reducing the amount of endowment funds available for financial aid and research,” says Jennifer Grodsky, BU’s vice president for federal relations.

*Charitable giving. The bill would double the standard deduction available to taxpayers, which would result in fewer taxpayers choosing to itemize their deductions. That would lower the value of the charitable giving tax deduction—potentially biting into the amount of money people would donate to colleges and universities.

Because the new, single credit would be available for a fifth year of college at one-half the amount as in the first four years, it could reduce support for graduate students, like those working for a PhD, who may spend more than five years pursuing their studies. While part-time students can use the current credits, the consolidated credit would not be available to them, the AAU’s Owens says. These changes would mean the government would spend more than $17 billion less over the next decade than with the current credits, he says.

Coverdell Education Savings Accounts. These are like 529 plans, allowing families to sock away money for college without the earnings  being taxed. The GOP plan would phase them out. BU’s Financial Assistance office doesn’t inquire whether students use Coverdell accounts, but anecdotally, staff believe most BU students rely instead on 529s, which have higher contribution limits.

As for the chances of passage, the bill “is the first step in the legislative process, and we don’t yet know what the Senate has in mind,” says Burlij. (Senators are preparing to release their own version.) “Students around the country will make their voices heard, and we are hopeful that Congress will hear them.”