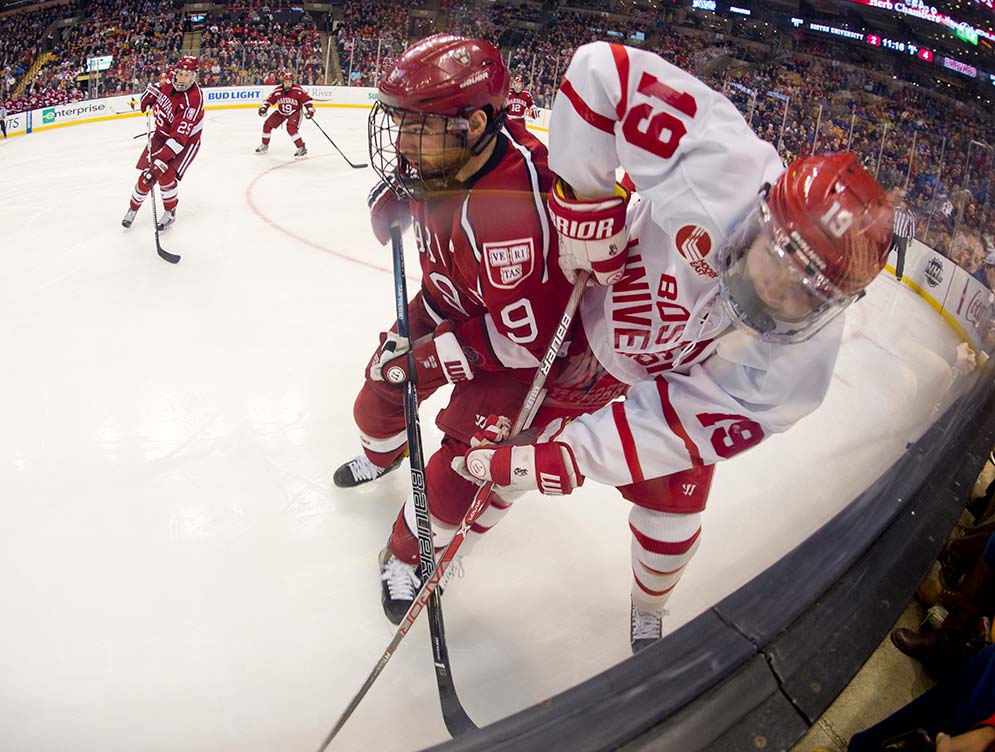 Clayton Keller (CGS’18) fights for the puck up against the boards in the Terriers’ 6-3 Beanpot final loss to Harvard at TD Garden last night. Keller tallied two goals in the game. Photo by Andy Costello

The Harvard Crimson hoisted the program’s 11th Beanpot trophy Monday night at TD Garden. They outlasted the Terriers, taking down the BU men by a final score of 6-3 in the 65th annual Beanpot championship game.

As the clock hit zero, Harvard players streamed off the bench to mob goaltender Merrick Madsen, not one of them old enough to remember the last time the Crimson won the tournament, in 1993. Nathan Krusko, who tallied twice in the game and was named the tournament’s most valuable player, wasn’t born until nearly three years later.

Halfway home in the second period, it looked as if the magic words BU head coach David Quinn (CAS’89) leveled at his players during the first intermission had done the job. Following a frame that saw the fourth-ranked Terriers limp off the ice after being outshot by number three Harvard 18-2 and outscored 1-0, BU stormed out of the locker room looking like a different team entirely.

Kieffer Bellows (CGS’18) tapped one in on the power play, Clayton Keller (CGS’18) redirected a shot from the point into the top corner to put the Terriers ahead, and the script the Crimson were penning through 20 dominant minutes of the tournament’s finale seemed ready to be flipped on its head.

It wasn’t to be. As quickly as it came, the fickle friend of momentum turned tail and rejoined the Crimson.

Luke Esposito pierced goaltender Jake Oettinger (CGS’18) to knot the game back up, then Krusko, who opened the scoring by slamming home a puck that trickled down Oettinger’s nameplate in the first, notched another to send the Crimson into the second intermission with a 3-2 advantage.

Harvard would play the aggressor again in the third, cashing in on a 5-on-3 power play in the first minute to grow the lead to 4-2. From there came offsetting goals from Harvard’s Ryan Donato and Keller, and an empty-net goal from the Crimson’s Adam Fox sealed the victory and kicked off the pandemonium.

Harvard outshot BU 46-17 overall in the game, exacting revenge for a 5-3 loss to the Terriers on November 22, a game that was much closer than the two-goal deficit indicated.

Oettinger was a bright spot for BU in the tournament. He brings the Eberly Award—given annually to the tournament goaltender with the best two-game save percentage—back to Comm Ave. The award goes to a Terrier for the second year in a row—Sean Maguire (CAS’16) not only won it last year, but took the tournament MVP as well.

BU will now pick itself up, dust itself off, and turn its attention to the final stretch of Hockey East regular season play. The Terriers play just four more games before the Hockey East Championship Tournament, taking on New Hampshire and Notre Dame twice each.

The postseason tournament will be held across three weekends, with the opening round set for March 3 to 5, the quarterfinals March 10 to 12, the semifinal round March 17, and the championship game March 18.