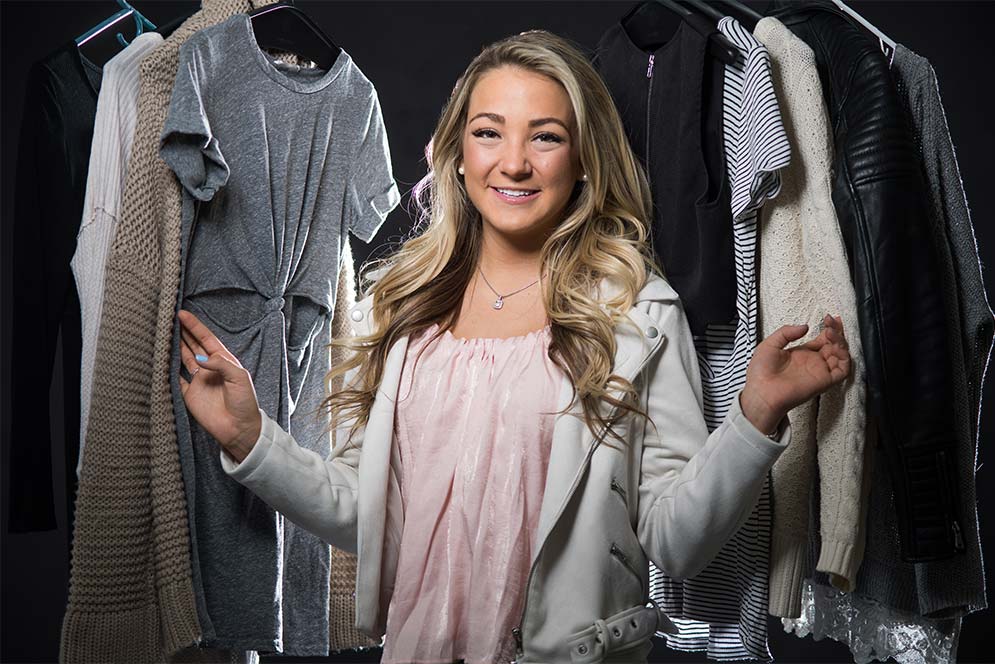 Gretchen Geraghty (Questrom’19) has partnered with fashion companies like Urban Outfitters and Victoria’s Secret Pink for her YouTube channel, GretchenLovesBeauty, which has received nearly 24,000,000 total views since she launched it in 2012. Photo by Cydney Scott

For Gretchen Geraghty, setting up lighting and equipment to shoot makeup and beauty videos in her StuVi digs between classes is a normal part of her routine. The 20-year-old is the creator and star of the popular YouTube channel GretchenLovesBeauty, which she began as a high school freshman in Latham, N.Y. Today, Geraghty (Questrom’19) is an internet personality, with business savvy to boot—in the five years since starting her channel, she has successfully built a brand and made a name for herself in the competitive world of beauty blogging.

Geraghty’s warm, upbeat personality, mile-a-minute speech, and seemingly tireless enthusiasm have won legions of fans. The channel has amassed almost 200,000 subscribers, and her videos nearly 24,000,000 views. As a YouTube partner, Geraghty makes money every time one of her videos is viewed (each is preceded by a product’s ad). And they have caught the eye of major fashion and beauty brands like Neutrogena, Pantene, Society6, and Urban Outfitters. She earns additional fees for promoting their products, although she prefers not to say how much.

“I work with brands that I feel are applicable to my audience,” says Geraghty. “I turn down a majority of brands because I want to work with the ones I like the most and think my subscribers will like.”

She credits her success to being an “open book” and seems both surprised and humbled by what she has achieved, frequently saying the resulting fame is crazy.

Geraghty began making the videos on a whim—a way to explore her passion for makeup and clothing. Now, with over 400 videos posted on her main channel, she has become a pro at filming videos focusing on makeup routines, skin care routines, wardrobe suggestions, and what she calls hauls, where she shares recent clothing, makeup, and interior design purchases with viewers. She doles out advice from how to do your morning makeup in a hurry to how to dress for class to how to look fashionable in the cold winter months.

“I’ve always been interested in and enjoyed fashion and makeup, and I love being able to share my ideas and thoughts with my viewers,” she says.

In a recently posted video titled “Full Face Makeup Routine,” Geraghty applies one of her favorite makeup looks and talks her viewers through the application.

Since arriving at BU, Geraghty has made a number of videos geared specifically to a college audience. She recently posted a video called “Ten Reasons to Go to BU” and has created videos that detail the ins and outs of college life, including tips on how to get into BU and a tour of StuVi.

“I feel like my college videos have really helped people,” she says. “I meet a lot of girls on campus who are freshmen or transfer students, and they tell me my videos helped them make the transition. It’s so nice to hear that I can give people a sense of what BU and college are like. I feel like a big sister giving my younger viewers advice.”

Geraghty says her Questrom classes have helped her communicate and negotiate with companies and keep track of what she earns from her videos. “I’m running my own business essentially. That’s been hard for me in certain cases, since I’m all on my own,” she says. “Questrom has helped me with the business end of things.”

Last summer, she and her twin sister, Lucy Geraghty (SAR’19), started a more informal secondary channel, Gretchen + Lucy, where they post video blogs and day-in-the-life videos. That channel already has 60,000 subscribers and over 7,700,000 views to date.

On the new channel, she has talked about rushing for a sorority and chatted about everyday college experiences like homework and going to the dining hall. These have earned some of the highest views, which she attributes to students watching her videos to get a feel for the University.

Geraghty says she doesn’t have concrete plans for life post-BU, but she’s interested in continuing her GretchenLovesBeauty channel.

“I feel so lucky that what I love is my job too,” she says. “I try not to worry too much about numbers or compare myself to other YouTubers. I just like that the people watching my videos enjoy them.”

There are 2 comments on How GretchenLovesBeauty Became a YouTube Sensation