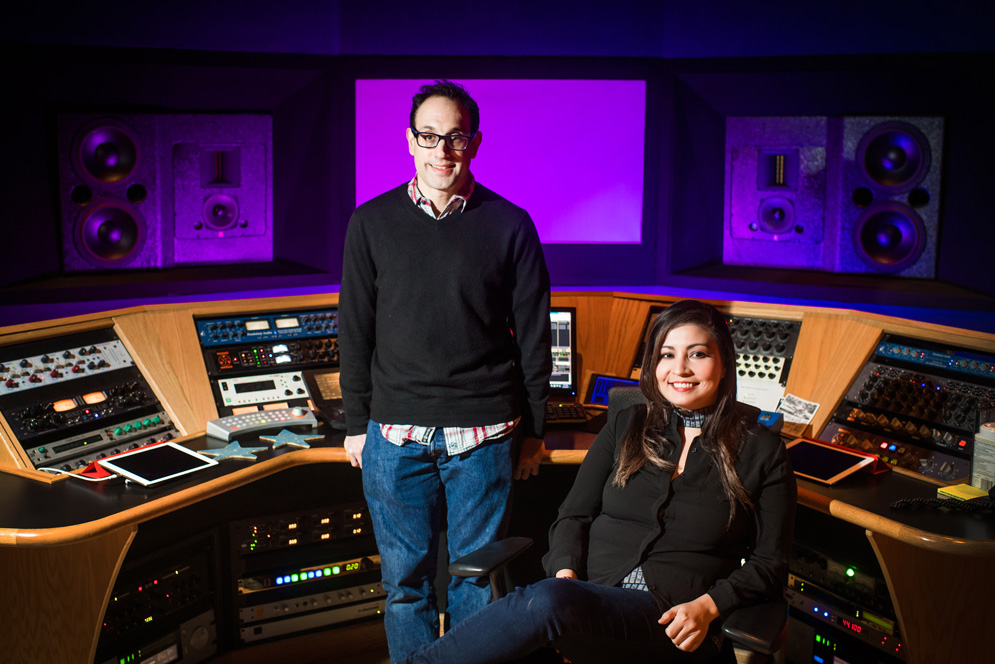 Jeff Lipton (Questrom’93) and Maria Rice (CAS’04), in Studio A at Peerless Mastering’s Newton headquarters, are nominated for a 2017 Grammy as mastering engineers on the compilation album Ork Records: New York, New York.

Grammy nominees Jeff Lipton and Maria Rice work inside a drab industrial building in Newtonville, Mass., where their neighbors include a bus company and a sewing studio. Inside the Peerless Mastering suite, however, you’ll find two state-of-the-art mastering studios—small, windowless rooms with enough computer and audio equipment to resemble the bridge of the Starship Enterprise.

And speakers, lots of speakers. Here, Lipton (Questrom’93) and Rice (CAS’04) perform the all-important postproduction task known as mastering, which involves perfecting each audio track and capturing the optimal mix for distribution.

This year’s 59th Annual Grammy Awards ceremony is this Sunday in Los Angeles, and Lipton and Rice will be there. The two are nominated as mastering engineers in Category 68: Best Historical Album for Ork Records: New York, New York.

The Ork two-CD or four-LP set documents the output of the little-known Ork label, which released music by rockers orbiting New York’s CBGB club in the 1970s, including Television, Richard Hell, the Feelies, Chris Stamey, Cheetah Chrome, and Richard Lloyd. Ken Shipley and Rob Sevier, cofounders of the archival label Numero Group, produced the set, and it was issued last year by Numero. Shipley and Sevier share the nomination with Lipton and Rice, who remastered the songs from recordings and original studio tapes.

“It’s supposed to be the first punk album in the historical category,” Lipton says.

Remastering projects actually take more time than mastering, but the bulk of Peerless’ work is mastering new albums by rock and pop acts, from the Dropkick Murphys to Arcade Fire, Andrew Bird to LCD Soundsystem. Lipton is particularly proud of having worked on a personal favorite, the now-classic 69 Love Songs by the Magnetic Fields, and he just mastered the band’s upcoming 50 Song Memoir, due out in March.

Mastering is “the final creative phase of the music recording process,” he says. “I’ll listen to every song on a record before I work on it and try to get inside the head of the artists and try to figure out what they’re going for. The music will tell me the story.”

By the time the music arrives at Peerless—often as files sent over the internet—the musicians are done recording, but sometimes they stop by the studio to watch over the mastering process. “I like having the artists here,” Lipton says. “There’s nothing cooler than looking in their eyes and seeing how they’re responding to what I’m doing.

“When you’re making an album, initially you’re working on recording all the parts, or tracking, and then you mix all the tracks together,” he says. “By the time you get to mastering, it’s the first time you’re thinking about how the songs relate to each other and how they’re going to go together, how cohesive everything is. We take a bunch of separate mixes and make them work together as a whole.”

And from Rice: “We make it sound like a record.”

That may mean slightly raising the volume on one track or lowering on another, along with adjustments such as equalization, compression, and limiting (which most listeners will never need to understand). “Here, every change is very fine, like a tenth or a quarter of a decibel,” Rice says. “These very fine changes accumulate across the whole texture of the mixes, so they all have a similar sound image.” They even make separate masters for vinyl, CD, and high-quality MP3, because each medium has different audio qualities.

Mastering engineers need terrific ears and a room that will give them the exact sound of the source recording. Peerless Studio A was designed by acoustician Bob Alach of Alactronics in Wellesley, Mass., to be the most neutral-sounding—“flat”—room possible. The room is actually twice the size you can see, with a complex system of insulation and acoustic panels hidden behind the fabric-panel walls and ceiling to absorb sound waves, so you hear exactly what’s coming out of the speakers.

“It’s scary good,” says Alach, who studied at BU and worked at WBUR, BU’s National Public Radio station. “People who know how to hear properly are shocked that they’re able to hear things they’ve never heard anywhere else.” That includes previously unnoticed glitches and distortion on favorite albums: “Put on Abbey Road and it’s horrifying,” Alach says with a chuckle. But when you listen to music that’s recorded really well, “it just blows your head up, because it’s so clean, so present.”

Of course, all that may be lost on people listening through earbuds to music from MP3s played on their phones. “People are listening to things that are loss-compressed and less high-fidelity than what people were listening to in the 1980s,” Lipton says, “and I don’t like the way that sounds.” He insists that the classic reel-to-reel tape at 30 inches per second is still the best sounding format.

Lipton, who studied business as a Questrom School of Business undergrad, started out taping local bands and the occasional national act in clubs all over Boston and Cambridge in the late ’80s and early ’90s, while working by day as a biomedical data specialist at Dana-Farber Cancer Institute. The bands liked what they heard on his recordings, and eventually asked him to master their records. He started out working from his apartment and opened the Newtonville facility in 1999.

Rice earned a BA in psychology at the College of Arts & Sciences while also studying classical piano. She worked as an intern at Peerless before leaving her day job as a project manager to come on board full-time in 2006. “I found a place that fits,” she says. “It’s good when you can be yourself at work.” She specializes in remastering and the sonic archaeology it requires, extracting music from LPs that may not be in the best condition or tapes in obsolete formats. She does most of her work in Studio B, designed by Alach and acoustician Michael Blackmer.

“Since Maria has been here,” Lipton says, “she has become one of the best restoration engineers on the planet.”

Peerless has remastered “95 percent, at the low end” of Numero’s catalog of nearly 300 vinyl records, CDs, and cassettes, says Shipley, who was familiar with Peerless’ work through former employer Rykodisc, then based in Salem, Mass.

“It’s their enthusiasm for the work that keeps us coming back,” he says. “They’re willing to try pretty much anything to get better sound out of our admittedly difficult master sources.”

For the Grammy-nominated Ork Records set, “Jeff and Maria rebuilt the Ork catalog from the ground up,” Shipley says. “It didn’t come in neatly. They pieced together singles, original masters, cassette tapes, CDs, and four-track tapes to create a seamless rendering of this legendary label.”

Lipton and Rice aren’t the only alums nominated for a Grammy this year. Soprano Georgia Jarman (CFA’97) is one of the singers on Szymanowski: Król Roger, conducted by Antonio Pappano, on the Opus Arte label, nominated in Category 76: Best Opera Recording.

Neither category will be on the televised portion of the Grammy ceremony airing on CBS Sunday night, but Lipton and Rice are going anyway. They had fun walking the Grammy red carpet in 2012 when Lipton was nominated as mastering engineer on Numero’s Complete Mythology, a compilation of work by the overlooked soul singer Syl Johnson.

“Another person in the best historical album category then was this little-known producer named Paul McCartney,” who was nominated for a deluxe reissue of Band on the Run, Lipton says. “Strangely, that little-known guy won.”

And how do Lipton and Rice assess the Ork Records compilation’s chances of being the first punk album to win the best historical album Grammy?

The 59th annual Grammy Awards, hosted by James Corden, will be broadcast live from Staples Auditorium in Los Angeles on CBS Sunday, February 12, at 8 p.m. ET.

There are 2 comments on Mastering a Grammy Nomination