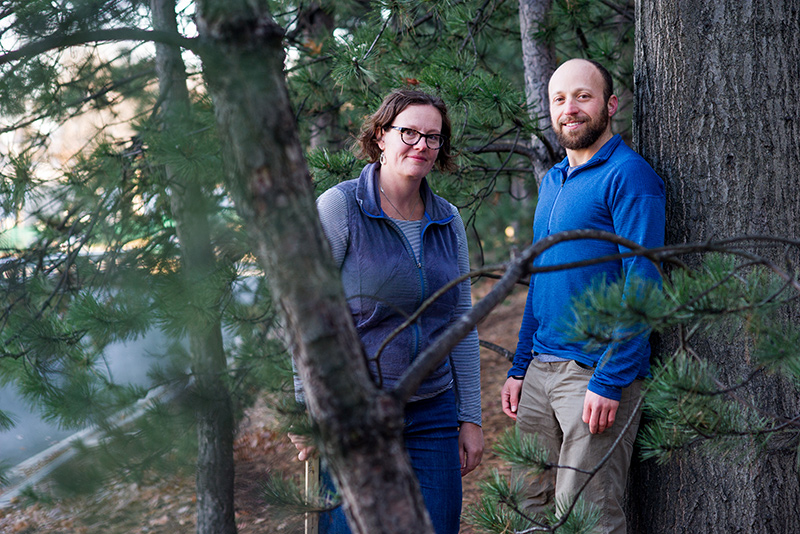 Over the past centuries, as we humans have cleared fields for farms, built roads and highways, and expanded cities ever outward, we’ve been cutting down trees. Since 1850, we’ve reduced global forest cover by one-third. We’ve also changed the way forests look: much of the world’s woodlands now exist in choppy fragments, with 20 percent of the remaining forest within 100 meters of an edge, like a road, backyard, cornfield, or parking lot.

Scientists have studied fragmented forests for decades, mostly to gauge their effects on wildlife and biodiversity. But recently, two Boston University College of Arts & Sciences (CAS) scientists—Andrew Reinmann (GRS’14), a postdoctoral research associate, and Lucy Hutyra, an associate professor of Earth and environment—have turned their attention to another issue: the effects of forest fragments on carbon storage and climate change. They found that temperate broadleaf forests, like the stands of red oak common in New England, absorb more carbon than expected along their edges, but they also found that those edges are more susceptible to heat stress. The research, funded by the National Oceanic and Atmospheric Administration, the National Aeronautics and Space Administration, and the National Science Foundation, and published in the December 19, 2016 issue of the Proceedings of the National Academy of Sciences, offers some good news and bad news about forest fragmentation. It suggests that while these forests may be more valuable carbon sinks than previously thought, they are also more sensitive to climate change.

“Having accurate estimates of what those trees on the edge are doing—how much carbon they’re taking out of the atmosphere—is really important when we think about our future climate,” says Reinmann, lead author on the paper.

The annual atmospheric concentration of carbon dioxide (CO2), a potent greenhouse gas and agent of global warming, has increased by more than 40 percent since the start of the Industrial Revolution and continues to rise. Forests play a critical role as a carbon sink, absorbing about 25 percent of the CO2 emissions we humans put into the sky.

Most of our understanding of forest carbon dynamics comes from studying intact rural forests like Hubbard Brook in New Hampshire’s White Mountains and Harvard Forest in Petersham, MA, not from studying forest fragments. “When you fragment a forest, you change a lot of the growing conditions of the forest that’s left behind,” says Reinmann, “but we don’t have a very good understanding of how that change affects carbon sequestration and storage.”

To find out, Reinmann and Hutyra gathered data from 21 fragmented forest plots around Boston, measuring about 500 trees. In eight of those plots, they went a step further, taking sample cores from trees above 10 centimeters in diameter, a total of 420 cores from 210 trees. They used the cores, and other data, to calculate how fast the trees grew. A tree’s size and growth rate indicate how much carbon it can absorb and also how much stress it’s experiencing.

“If this carbon sink all of a sudden shuts off, our projections for future climate will change,” says Reinmann. “So our current understanding and ecological models, which don’t account for this, are missing something important.”

Reinmann and Hutyra found that forest fragments grow faster along the edges than intact forests, absorbing more carbon than expected. “When you create that edge, you essentially are reducing competition and freeing up resources like light, water, and nutrients for trees,” says Reinmann, who notes that the effect extends in about 20 meters from the forest edge. Curiously, the finding may hold only for temperate broadleaf forests common in New England, the Appalachians, Canada, and Europe. Amazon rainforest has the opposite effect when fragmented, with lower biomass and less carbon storage along the edges.

“Foresters and loggers have known this intuitively for a long time: if you go in and you reduce the competition for resources, the remaining individuals will grow faster,” adds Hutyra. “The novel piece of this work was to quantify it across these edges, see how far into the forest it goes, and put it into context with how much this fragmentation matters in a portion of the world—southern New England—that we know is a large net carbon sink.”

Though this seems like a win for our patchy New England forests, deforestation is still bad for carbon sequestration overall. “When you fragment a forest, the remaining forest can offset a little bit of what was lost, but not completely,” says Reinmann. “So it may not be as terrible from a carbon perspective as we thought, but it’s still bad.”

Offsetting this (somewhat) good news is the paper’s other finding: these forest edges, more exposed to wind and sun, grow more slowly when stressed by heat.

“You lose a lot of carbon benefit in hot years,” says Reinmann, who found that the “magic number” for local trees is about 27°C (80.6°F), which corresponds to the average high temperature in July, our hottest month. “But once you get much past that threshold, the trees grow much slower,” he says. And the really bad news: if regional temperatures continue to increase at a steady pace, the current carbon benefit offered by forest edges may decline significantly. “If this carbon sink all of a sudden shuts off, our projections for future climate will change,” says Reinmann. “So our current understanding and ecological models, which don’t account for this, are missing something important.”

Reinmann and Hutyra are currently expanding the work to study rural forests and are so far finding even larger effects there. They are also hoping to use high-resolution imaging and more precise chemical analyses to look closer at core samples to see how growth and photosynthesis change over days, seasons, heat waves, and other environmental stressors. More data may lead to better models, says Hutyra.

“As we continue to more actively manage our landscape, whether it be thinking about agricultural intensification in Brazil or urban expansion in China or sprawling urban development here, the fragmenting of the landscape is ubiquitous. It’s likely to stay, if not increase,” says Hutyra. “And so quantifying the effects of all this fragmentation is really important for understanding the long-term and short-term ability of forests to continue to take up carbon, and for us to be able to accurately model that to project future climate.”

Good News and Bad News about Forest Fragmentation
2
share this