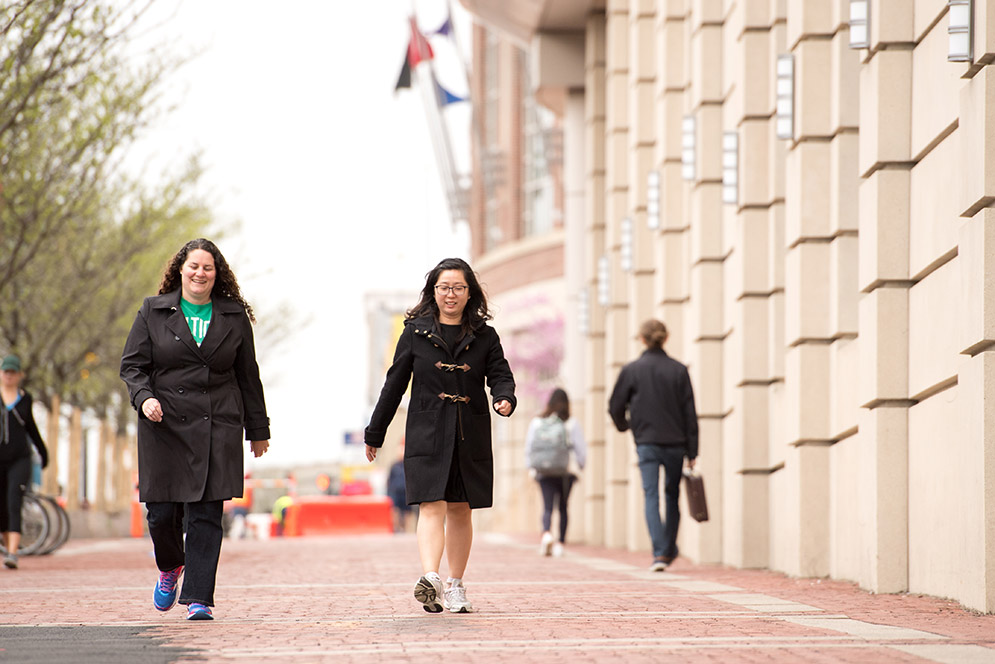 Marketing & Communications editor Rachel Johnson (MET’11) (left) and External Affairs administrative manager Takyu Tang (MET’13) like to head over to the Esplanade during their lunch break. Photo by Cydney Scott

Inderpreet Singh got some heat when he agreed to an interview with BU Today about his team’s first place status in BU’s Fitbit Walking Challenge.

“Everyone was nervous that I would give away our trade secrets,” says Singh, captain of the Imperial Walkers, a group of metric lovers from Information Services & Technology, who, appropriately, took their name from Star Wars. “Our plan is just consistency. We don’t need one person to be doubling down or going crazy, we need effort from everyone. If our baseline is good, then we should be able to build upon that.”

The challenge, spearheaded by BU Employee Wellness, has had more than 1,600 employees sign up on 127 teams—the largest participation in one singular wellness program since at least 2003, one Wellness staffer estimates. The six-week contest, which ends May 15, is sponsored by Human Resources and the Fitness & Recreation Center.

“We hope the walking challenge encourages employees to increase their activity level and form a sense of camaraderie with a common goal,” says Geni Rose, a Human Resources senior benefits analyst and cocoordinator of the challenge. “Talking about their progress in the challenge is bringing wellness into everyone’s everyday conversation, and we hope this becomes a long-term change.”

The idea for the challenge was born last year, says Rose, when Employee Wellness looked at the kinds of wellness programs run by peer institutions and discovered the popularity of walking competitions.

Teams started signing up as soon as the email announcing the challenge was sent out in March and spots filled up earlier than expected. Team names were also more creative than expected. They include: The Walking Dead; Rhett-y to Walk; Walker: Fitbit Rangers; Holy Walkomolies; Silber Way Striders; Accounting Our Steps; My Sole Called Res Life; and the Kristoffer Walks-Ins. The enormous popularity of the challenge means there will likely be future competitions, Rose and Gettinger say.

“The challenge has resulted in a strong camaraderie, and we are socializing more than before.” –Inderpreet Singh

To keep track of the steps, eligible employees were given free FitBit Flexes, which measure steps taken as well as sleep patterns. The FitBit devices are able to sync with the Blue Cross Blue Shield portal AHealthyMe and team members can log on to see their progress. Walkers say they enjoy this aspect of the competition, because they can tell who on their team is slacking and how many steps they need to overtake rival teams.

One person significantly adding to those numbers is Danuta Charland, assistant to the director of the Sargent College of Health & Rehabilitation Sciences health sciences department. She is currently leader of the pack—as of yesterday, she had totted up 1.76 million steps. Charland says 12 different people asked her to join their team, with the idea that she could help them raise their numbers—her April average is about 30 miles per day, she says. But despite this enthusiasm, her team, the Drill Sargents, is not in the top 10.

“My normal wake-up time is 5:15 or 5:30 a.m., but I’ve been waking up earlier to walk,” says Charland, who put in the equivalent of two marathons on Marathon Monday and wears two pedometers to make sure her steps are accurate. While others may say they don’t have time to exercise, Charland doesn’t like excuses. “I go to school, I work eight to four, I teach classes a few days a week, and I’m still able to walk a lot of miles,” she says.

During lunchtime, External Affairs administrative manager Takyu Tang (MET’13) and Marketing & Communications editor Rachel Johnson (MET’11) get in their miles by taking off for the Esplanade. “We see other walkers and can tell they’re in the challenge by looking at their wrists,” Johnson says. “Groups of them will be walking in herds.”

Singh says one unexpected benefit of the challenge is getting to know his coworkers a little better. His team members are from two groups who sit in different areas and previously hadn’t mingled much. “The challenge has resulted in a strong camaraderie, and we are socializing more than before,” he says. “We now set up times for group walks.”

Shannon Kelly, Medical Campus Information Technology office central resource scheduler, averages about 13,000 steps a day by doing things like walking her dogs or parking a little farther away at a mall or a grocery store. “I’m going out of my way to add more and I enjoy doing it,” she says. “I told my coworkers I better not see anyone taking the elevator during this challenge. I tell them to take the stairs.”

There are 7 comments on Fitbit Walking Challenge Heats Up