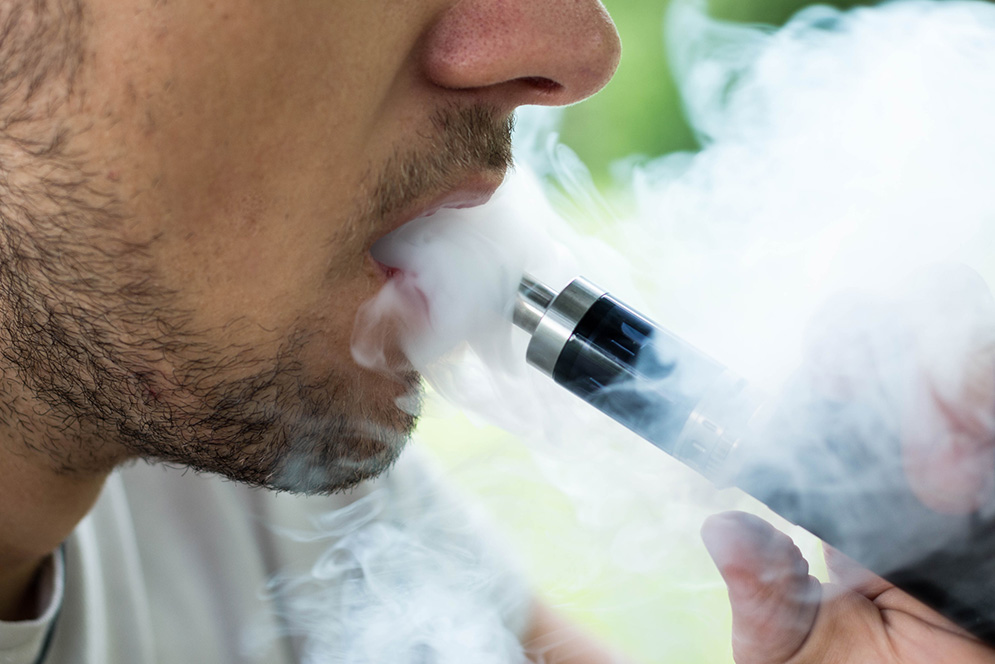 An exploding electronic cigarette tears a New York man’s tongue, scorches his hands, and knocks out some teeth. A New Jersey vaper sustains third degree burns over 20 percent of his body when his e-cigarette blows. A Connecticut man is knocked unconscious while vaping, also suffering damaged teeth and hand burns.

These are among at least 93 reported mishaps around the country involving faulty lithium-ion batteries in e-cigs. While the victims represent just a fraction of the country’s 2.5 million vapers, existing government law actually impedes manufacturers from addressing the danger, says Michael Siegel, a School of Public Health professor of community health sciences.

“In all my years in public health, I cannot think of another public health regulatory action that is so acutely threatening to the public’s health,” Siegel recently blogged.

A tobacco control researcher who has focused on issues from secondhand smoke to the effects of advertising, he notes that e-cigs are much safer than real cigarettes. But the defects in Food and Drug Administration (FDA) regulations governing e-cigs mean that users must protect themselves from potential explosions, he says. Meanwhile, US Senator Charles Schumer (D-N.Y.) wants federal safety officials to investigate the problem.

BU Today: How serious a problem is this?

Siegel: It’s not a mystery as to what’s causing these: the lithium-ion batteries have liquid that explodes with overheating. Based on what we know, this is happening with rogue manufacturers whose products are not up to quality standards. Most are using high standards in choosing batteries, but there are always going to be some bad players.

What regulation prevents companies from fixing this defect?

The FDA has said you cannot make any changes in your e-cigarette unless you get FDA approval as a new project. That requires a complex and expensive application that could take years for the FDA to rule on.

Why does the FDA do that? If that principle applied to automobiles, you’d never have a safety recall for cars.

Exactly. This concept that a manufacturer should not be allowed to make safety improvements is absurd. The only reason this is in place is because of the unique situation of the tobacco companies.

They were the most egregious example of companies that were making changes in their products to make it look like they were safer, but they were not. The companies came out with “light” cigarettes—lower nicotine, lower tar—to protect the public’s health. It didn’t, because people would just smoke more or inhale more deeply. Because of that history, when the federal law that gave the FDA authority to regulate tobacco was passed in 2009, it was geared toward cigarettes. E-cigarettes weren’t on the radar at that point. Congress was saying, Big Tobacco, you’ve lied in the past. From now on, you want to make any change in your product, you’ve got to run it by the FDA first. You can’t just say this is a safer product.

The problem is that the FDA has taken that framework and applied it to a product that is completely different and for which these laws were never intended. I would argue there is enough room in the regulatory interpretation that I don’t believe the agency was bound by having to apply this statute to e-cigarettes; there was enough discretion that they could have exempted these products from certain aspects of the regulations.

Regardless, it’s clear that that is their decision. Given that, I think the solution is to have Congress rewrite the law to make clear that for e-cigarettes, the FDA must put out requirements as far as battery safety and other safety issues.

Will an antiregulation Republican Congress and White House do that?

Possibly. Ironically, the Democrats are not willing to do that, and the antitobacco groups are supporting the current law. It’s an ideological issue; there is so much history of opposition to smoking and anything that looks like smoking that the health advocates are lumping e-cigarettes into the same basket as cigarettes. To them, it’s another form of smoking. But with e-cigarettes, research shows they actually are safer.

The current regulatory approach doesn’t make sense. Trump is coming at it from an antiregulatory perspective, but it turns out that that presents an opportunity to fix the problem.

So barring any change to the law, what can vapers do to protect themselves?

First, buy from a high-quality manufacturer. Do background research and make sure you’re dealing with a reputable company. There are reviews online. Avoid obscure websites, where you’re buying from a company that may be sketchy.

Once you have your product, the most important thing is use only components that come with your product. When you’re charging the battery, use only the charger that is dedicated to that device. A major cause of these explosions is charging the device using an adapter or charger that’s not designed for that device. The second thing is to make sure the charger has overcharge protection; that way, the battery won’t overheat.

Do not carry lose batteries around. Certainly don’t carry them in your pocket. If you do have to carry them, make sure they are tightly sealed in some plastic case or compartment. If you have coins in your pocket, those coins could create a connection with the battery; you could have a circuit, and it could lead to an explosion.

Last, do not ever carry e-cigarettes in your checked baggage—you’re actually not allowed to—there is a risk of a fire from the battery touching metal.

There are 2 comments on Exploding E-Cigarettes: Rare but Dangerous