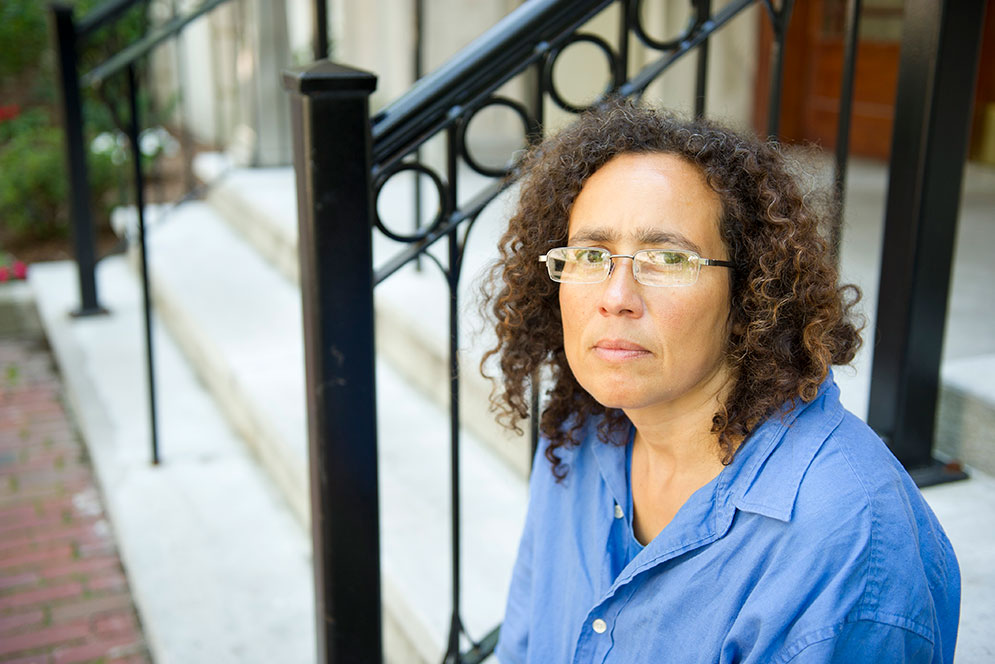 Neta C. Crawford, a BU College of Arts & Sciences professor of political science, codirects the Costs of War Project at Brown University’s Watson Institute for International and Public Affairs. She includes the costs of healthcare and disability compensation in her accounting. Photo by Cydney Scott

How do you count the costs of war?

In the Pentagon’s most recent accounting, the total authorized US spending on the wars in Afghanistan, Iraq, and Syria between fiscal years 2001 and 2018 is $1.52 trillion. The bill for each individual taxpayer amounts to $7,740, according to the Pentagon.

But Neta C. Crawford, codirector of the Costs of War Project at Brown University’s Watson Institute for International and Public Affairs, says the true cost is higher—about three times higher. Crawford, a Boston University College of Arts & Sciences professor of political science, calculates the total price tag of the post-9/11 wars at $4.6 trillion, with the bill for each individual taxpayer totaling $23,386. The numbers come from Crawford’s latest Costs of War report, released in November 2017.

The Costs of War Project has a team of some 40 scholars, legal experts, human rights practitioners, and physicians that documents the economic, political, and human toll of the post-9/11 wars and related violence in the so-called war on terror.

Speaking at a Congressional briefing by US Senator Jack Reed (D-R.I.), the ranking Democrat on the Armed Services Committee, Crawford said that while the Pentagon’s numbers focus on “direct war spending” by the Defense and State Departments, her calculations also include war-caused and war-related spending by the Pentagon, the State Department, the Veterans Affairs Department (VA), and Homeland Security. That spending includes the VA’s healthcare costs for about two million soldiers and disability compensation for another million soldiers.

Crawford, an expert on the ethics of war and international relations theory, said her accounting also includes the paid interest on the money the United States has borrowed for the wars. “This is not a pay-as-you-go war,” she said at the briefing. “It is rather more like taking out a home equity line of credit.”

BU Research talked with Crawford about how she became involved with the Costs of War Project, why she thinks it’s important to talk about the costs of war, and how one Vietnam veteran’s broken life got her interested in the subject.

BU Research: What do you mean when you say the costs of war don’t end when the wars end?

Crawford: Project contributor Linda Bilmes, Daniel Patrick Moynihan Senior Lecturer in Public Policy at the Harvard Kennedy School, says these wars have been paid for with a credit card. It’s like getting a mortgage. We’ve moved in, we’ve moved out, and we’ve given the debt to our kids.

There are two million men and women who’ve served and once they leave the service they become eligible for medical care and disability through the VA. An unfortunate fact of these wars in Afghanistan and Syria is that many of these veterans are sicker than in past wars. That’s partly because of exposure and just mistakes that were made. Remember those open burn pits they used to get rid of waste at military sites in Iraq and Afghanistan? Those caused respiratory illnesses. Some of it is also the very dusty environment soldiers are operating in. Often they’re carrying very heavy packs, which can cause injuries to their musculature. Deployments in the military are longer now, and people have served multiple deployments.

As a result, health insurance costs have gone up for people after duty and for veterans. Over the long term, there is the care of these veterans, who have higher rates of heart disease and lung problems, not to mention the more than 1,600 people who have lost limbs. Medical and disability costs for those people are going to peak in about 40 years. So I have an estimate that’s perhaps low for the cost of healthcare over the next 40 years.

Can you tell us more about the VA’s portion of the costs of war?

Just last year 80,000 more veterans entered the queue for disability compensation. The VA is serving about a million people for disability. The costs for those people will go up as they get older. I’m not even talking about the spiritual pain and distress for families.

What are some of the other unknowns?

What do you and the other Costs of War scholars hope to accomplish with these annual reports?

I think it’s the job of academics and people in Congress to have these discussions. We’re trying to create the space to have an informed conversation, one that’s not driven by fear, but by evidence. Many people don’t know how to talk about war and to question what we’re doing for the last 16 years, because they’re afraid of seeming as if they don’t support the troops.

Everyone will say we want to give these men and women what they need do their jobs. But we also need to question the job: how well is it going? Are we achieving our policy objectives? You have to recognize that these objectives are moving goal posts and the metrics for success are elusive.

The second thing I think we need to question is whether there is no other way to achieve the objective of security. If the idea is that you want to prevent future terrorist attacks, are there other means besides killing as many potential or actual militant terrorists as there are over there? Can we not think about how to reduce the cause for people to become terrorists?

Since imperial Rome, you said at the briefing, great powers have “almost always believed that their wars would be short, effective, and inexpensive compared to the gains.” Does that apply to these wars?

The American people have been told that these wars would be short, low in cost in terms of lives, and low in cost in terms of funding, that the war in Iraq might even pay for itself. We were told that we’d leave the place better than it was when we came. That’s always the case when you enter wars. You have these optimistic assessments and estimates and promises about the duration, the likelihood of success, and the costs of conflict. Generally, they’re proven to be overly optimistic. We’re trying to point out that this is a pattern.

How did you get interested in the costs of war in the first place?

I’ve been working on research related to war for decades. I grew up in Milwaukee. My father was a public school teacher. He had a side job, renovating houses to sell or rent. He believed in a strong work ethic, and I was helping him by the time I was 9 or 10. I worked alongside a man named Calvin, who was a Vietnam veteran. My father said Calvin was not the same person when he came back from the war. I kept track of Calvin through my father. He was not mentally stable. He was a kind, gentle person, but he was broken by his experiences in Vietnam. The contact with Calvin was formative for me.

Your report talks about war’s unmeasured costs: “the civilians harmed and displaced…the soldiers killed and wounded, the children who play…on roads…with improvised explosive devices…” and the opportunity cost: “what we might have done differently with the money…” What are some other unmeasured costs?

The moral injury, the psychic harm, the fear of terrorism people have been living with for a long time—those are all things we can’t quantify.