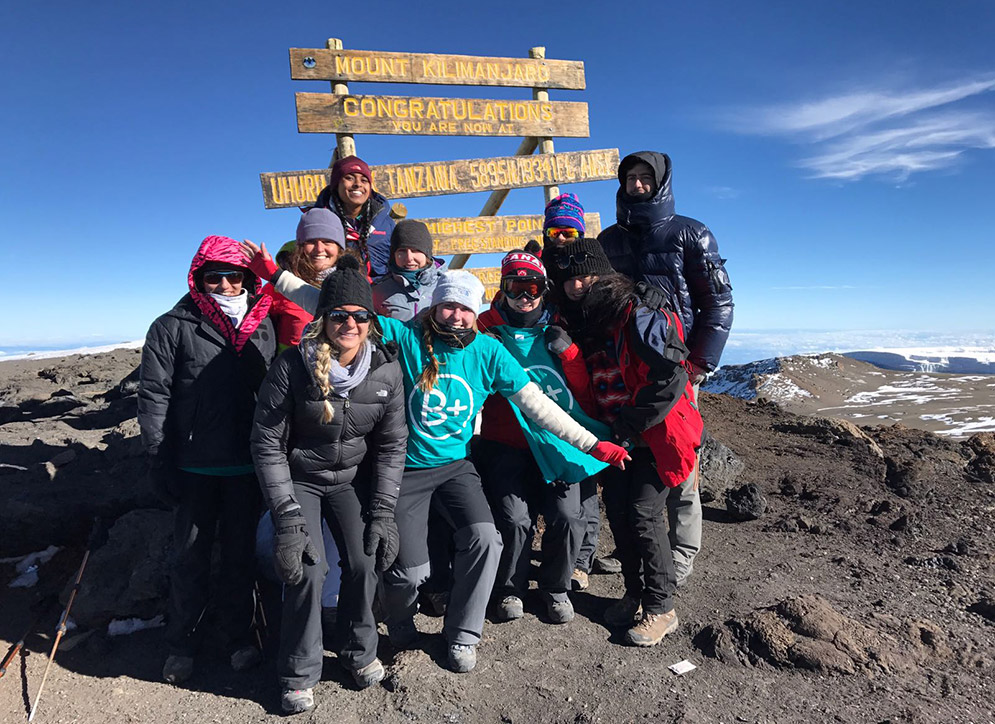 Students from BU and other schools reached the summit of Mount Kilimanjaro early Sunday morning local time. They made the climb to raise money for a children’s cancer charity. Alexa Nutter (Questrom’19) (center front, arms extended) organized the BU contingent.

While most brand-new BU graduates revel in the post-Commencement glow this week, a dozen rising juniors and seniors scaled a different kind of peak.

The group of 11 women and one man, organized over the past year by Alexa Nutter (Questrom’19), is in Tanzania at the moment, most of them headed for a safari after climbing 19,341-foot Mount Kilimanjaro to raise money for a charity. Among the climbers were several friends from Nutter’s freshman-year lightweight crew team.

Under the auspices of the international student-travel operator Choose a Challenge, the BU group raised more than $66,000 from friends, family, and various events. Half of that sum pays for travel costs and the other half goes to their chosen charity, the Andrew McDonough B+ (Be Positive) Foundation, which offers financial assistance to the families of children with cancer.

The climb itself is an eight-day hike—six up and two down—with plenty of stops along the way to allow the climbers to acclimate to the altitude. “It’s not a hard climb as far as the trails, but the altitude is what gets to be hard,” Nutter said before leaving for Africa. The group had taken a few day hikes together, to places like New Hampshire’s Mount Monadnock, but there’s nothing east of the Mississippi that comes even close to Kilimanjaro’s height.

“We get to hike with all the Sherpas that have been doing it with this company for years, so that will be really helpful,” she said. “They do our meals for us and help us carry our things if we need it.” 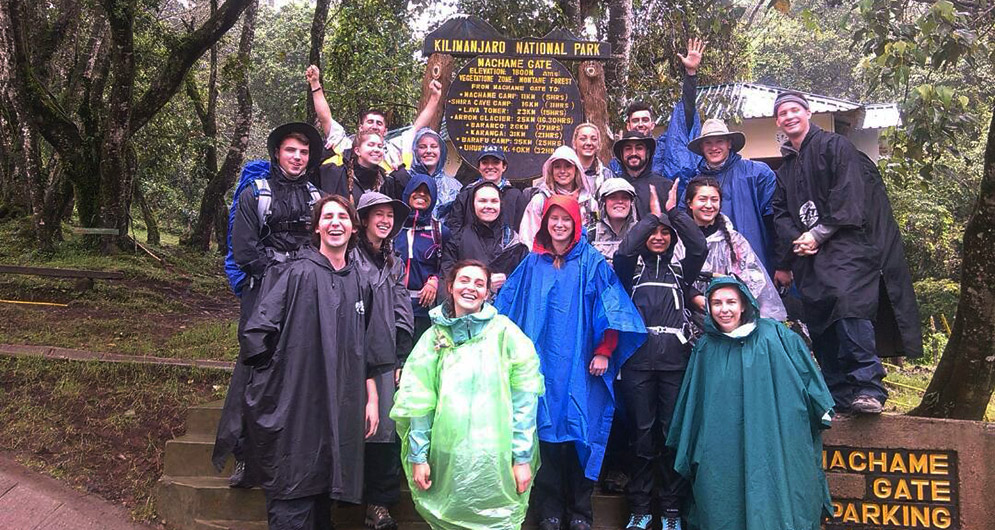 The students began their climb at Machame Gate last week. As organizer, Nutter (top row, second from left) chose the Andrew McDonough B+ Foundation to receive the money the BU climbers raised.

Smaller groups from Penn State and the University of Connecticut climbed with the BU contingent in support of other charities. After returning to sea level, some came straight home while others added on safaris and beach holidays, which is the primary source of income for the London-based for-profit Choose a Challenge.

The trip arose from Nutter’s studies. She was researching nonprofits for an ethics class and came across Choose a Challenge. “They were looking for someone in the Boston area to lead a challenge,” she said. Company representatives came to BU to help her get organized, and she went to New York for three days last summer for more extensive training alongside the organizers of other groups. Selling her friends on the idea was harder than she thought it would be. “People were really interested,” she said, “and in the UK it’s a very common thing. But here, this is something nobody’s really heard of before.”

But by November, she had a group large enough to make the trip a go, and the students began fundraising, individually and as a team. Nutter had picked the Delaware-based Andrew McDonough B+ Foundation from Choose a Challenge’s short list of charities.

“My grandma has cancer,” she said, and she had volunteered at an event at her high school for children with cancer. “I’ve worked with kids who had cancer and coached special needs hockey at my high school. It was something I’ve done for a really long time.”

“One of our main missions is to raise awareness. The climb and the students from Boston University help us to further spread our mission,” says Carly Bergstein, Andrew McDonough B+ Foundation program director. “Here we have 12 students who before knew nothing about B+ and are now taking on this incredible trek. They’re going to the top of Kilimanjaro with B+ posters and banners and T-shirts. It’s incredible for us that students care so much and become so dedicated to the mission of fighting childhood cancer—while doing something really exciting for themselves.” 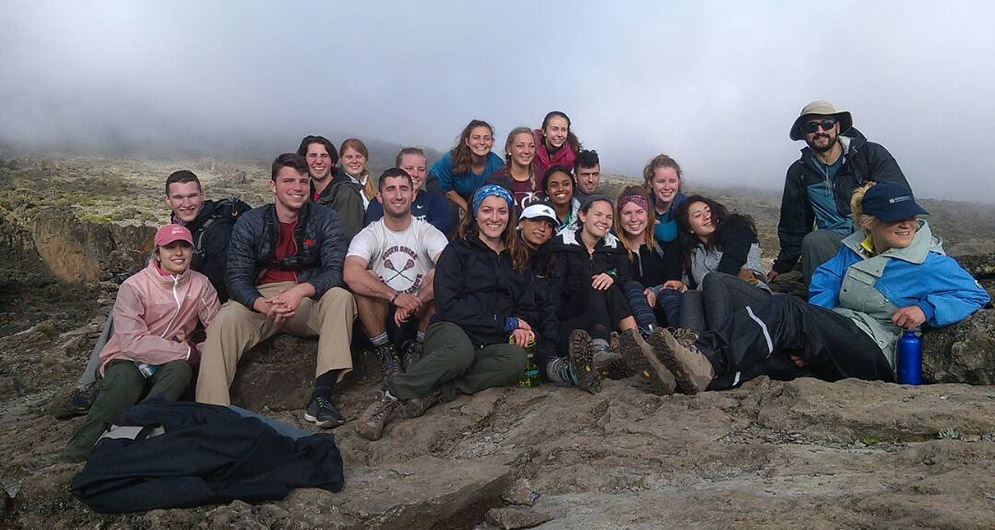 Weather and altitude are just two of the challenges that faced the students climbing Mount Kilimanjaro to raise money through student travel operator Choose a Challenge. On day three of the hike, the climbers were above 10,000 feet, on a part of the mountain called Barranco.

The foundation was created by the family of McDonough, a 14-year-old who died from leukemia on July 14, 2007; its name is a play on his blood type and his attitude while fighting the disease and its many complications. In 2016, the organization helped 2,200 families with short-term expenses such as lodging, medication, and transportation while their children were undergoing treatment. B+ has supporters on many campuses.

Fellow climber Gomez and Nutter “were friends and she told me about it. This was an opportunity I’d never heard of. I couldn’t imagine passing it up,” Gomez said. She raised money for B+ with a lot of Facebook asks, small donations from friends, and hitting up her parents’ friends. Helping B+ “was another reason I couldn’t pass it up,” she said. “I’ve never raised that much money before.”

Choose a Challenge also organizes charity treks to destinations such as Machu Picchu and the Great Wall of China, as well as running and cycling challenges in Vietnam, Morocco, and other countries. But Kilimanjaro is where it all started a decade ago, and the group’s long experience there ensures a smooth and safe trip.

The most popular phrase on the mountain, he notes, is “Poley, poley”—“Slowly, slowly” in Swahili. “You’ll have these really fit students thinking they can blaze up the mountain, and they’ll keep getting in front of our head guys, who’ll say, ‘Poley, poley, come back.’ ”

There are 5 comments on Climbing Mount Kilimanjaro for Charity