In early November, Paolo Moreno announced on Instagram that he was releasing a new collection of sweatshirts as part of his clothing line Chemical X. He expected them to be sold out within a week. “Since I don’t drop too often, it increases the hype on everything and makes it more exclusive,” Moreno says. “I advertise once, and that’s it.”

Moreno (CGS’18) cofounded Chemical X, a clothing brand conspicuous for its massive “X” logo, two years ago with partners Pedro Monestier, a former Parsons School of Design student who designs the clothes along with Moreno, and Miami photographer Matias Vasquez, who helps with branding and promotion. Moreno came up with the name after hearing the term “chemical X” on TV.

“In math, the ‘X’ is unknown, it’s subtle,” he says, wearing a white hooded Chemical X sweatshirt and black joggers to an interview with BU Today. “I like how people question it and are not too sure what it is.”

The trio was initially inspired by the rapper A$AP Rocky and the brand Supreme. Today, they collaborate to create Chemical X’s signature hooded sweatshirts, nylon jackets, turtlenecks, tote bags, and beanies. As for why they’ve opted to design streetwear and not high fashion: “That’s what we wear,” Moreno says, “and it’s affordable. I hate how some clothing is priced so high.” The brand’s sweatshirts, for instance, typically run $60. The company also sells “mystery boxes” with several pieces of surprise clothing for various prices.

In the two years since its launch, Chemical X has achieved a certain level of notoriety. The company signed with influential celebrity promoter Phil the Mayor to showcase the collection in a pop-up store at the Miami venue Appt Only in March 2017. Moreno sheepishly shows a video someone sent him of a teenager outside his Miami home shouting, “We found the makers of Chemical X!”

To make the clothes, Moreno and Monestier first sketch the designs by hand, then redraw them using Photoshop. The designs are then sent to local manufacturers Xtreme Silkscreen and Tully Ink for screen printing. Items are normally sold online, but Chemical X has had a lot of luck with pop-up shops, like the one held in October at local art gallery space Market at Casablanc alongside fellow designers StayCoolNYC and DDrey Design.

In addition to the brand’s artsy promotional shots, Moreno peppers the campus with “Chemical X” stickers, similar to artist Shepard Fairey. His biggest inspirations for the clothing line at the moment are Cav Empt and the designer Raf Simons, the chief creative officer at Calvin Klein.

The November release marked the launch of Chemical X’s new line, Introspection, which features a hand-scrawled poem about loneliness written by the designers, with a picture of a man’s face superimposed over it. The Introspection designs “cost more to make since the design took months to create,” Moreno says about the $70 price. “It was very detailed.” An upcoming line, Antidote, is inspired by labs and science, and he may try to shoot promotional photos in a lab to advance the line, he says. He produces only a certain number of each design, and the limited quantities usually sell fast. “I like to move on from my collections,” he says. 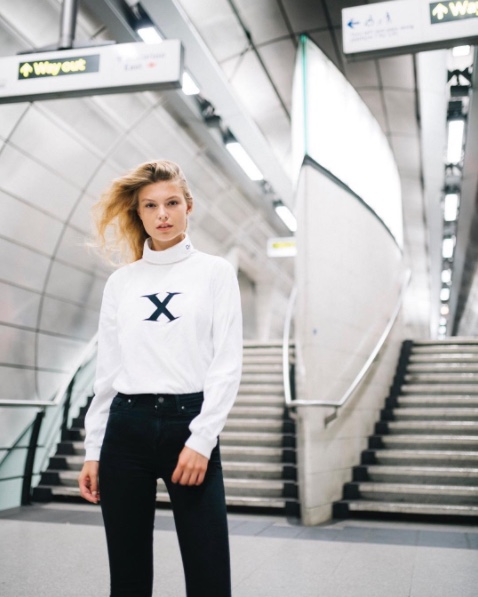 While Moreno was vacationing with family in St. Barts around New Year’s Eve 2016, a family friend introduced him to famous fashion photographer and architect Marco Glaviano at an art gallery, which led to a summer gig with Glaviano. “This guy shot all the models of the 1980s and 1990s, like Cindy Crawford, and his work appeared in Vogue,” says Moreno, who assisted the photographer for a month in Milan and accompanied him to Fashion Week there. It was a chance to see up close another side of the fashion industry. “I helped out with lighting a shoot and setting up, and got to meet people in the business,” he says.

This summer Moreno hopes to intern at a magazine in Los Angeles, and eventually turn Chemical X into a bigger brand with its own magazine or modeling agency.

“The clothing is a lot more meaningful than the person wearing it may realize,” he says. “It has to do with real life. There are brands out there that put anything on their clothes that crosses their mind. Every time we design something we have a theme, and there’s a story behind it.”

Meet the Designer behind Chemical X Fashion Company
12
share this