In the time-lapse video above, artist Carson Fox and her assistant, Cara Lynch, install Fox’s Blue-Green Brainbow over the course of six days in the lobby of the new Rajen Kilachand Center for Integrated Life Sciences & Engineering. Video by BU Productions

Entering the lobby of the new Rajen Kilachand Center for Integrated Life Sciences & Engineering from the west, a visitor is immediately struck by the soaring ceiling, the gleaming white walls and floor, and the natural light pouring in from the plate glass wall that looks out on Commonwealth Avenue. But the undisputed star is a massive art installation of vivid shades of blue, magenta, violet, green, yellow, and red. At more than 230 square feet, it’s a showstopper.

Titled Blue-Green Brainbow, the work is by Brooklyn-based sculptor and printmaker Carson Fox, whose work has been shown across the United States and internationally and who is best known for her site-specific installations—usually made of resin—that recall forms found in nature: flowers, logs, icicles, coral, and rocks.

“I love being able to respond to the architecture of the specific space,” says Fox, who was chosen for the Kilachand Center commission by a panel of judges consisting of Gloria Waters, vice president and associate provost for research, Walt Meissner (CFA’81), associate vice president for operations, Chantal Stern, a College of Arts & Sciences professor of psychological and brain sciences and director of the Cognitive Neuroimaging Center, housed in the building, Lynne Allen, College of Fine Arts interim dean, and Jim Collins, a principal architect at Payette, the firm that designed the Kilachand Center.

The original idea, Waters says, “was to have some sort of interactive video display that would bring science to the street” by highlighting the work being done in the building’s various labs. But the equipment proved prohibitively expensive, in part because it would need to be updated frequently. So the committee reached out to several artists known for creating public or private installations. Fox was one of three finalists invited to submit presentations last December.

“I knew this was going to be a life sciences building, but that can mean a lot of different things,” says Fox. “So I did some research about what would be happening in the building. My first proposal was just about cellular structures, and that wasn’t good enough. The committee said they liked my work, but it’s not in the spirit of the building.” So she did more research and spoke at length with Stern about the work of her center. She also checked out the websites of other faculty who would be working in the new center, and the jurors suggested some starting points. One suggestion bore fruit: researching the visual documentation of neurons firing in the brain.

“That was the turning point for me,” says Fox, who was mesmerized by photos of a neuroimaging technique called Brainbow, which distinguishes individual neurons in the brain using fluorescent proteins, thereby enabling scientists to study neural connections in unprecedented detail. The method allows more than 100 neurons to be differentially illuminated at the same time, leading to striking visual diversity.

“The Brainbow images were both visually rich and compelling,” Fox says. Creating an installation that referenced the pioneering neuroimaging technique was a way to capture both “the beauty and wonder found in the life sciences.”

Waters says it’s fitting that the Kilachand Center should feature a work of art inspired by the Brainbow process, as it speaks directly to the work being done there, in particular at the Center for Systems Neuroscience. “At the time of its development, Brainbow was a cutting-edge technique in neuroscience,” she says, “and a major focus of the Center for Systems Neuroscience is on developing new techniques that allow scientists to better understand the brain.”

Fox knew from the outset that the scale of the project would be monumental. Blue-Green Brainbow is 15.5 feet wide, 15 feet high, and 4 inches deep. She conferred with the architects before starting work to make sure that the lobby wall could support the installation. The result: the space was reinforced with multiple layers of extra-thick drywall on board to ensure that it was strong enough to hold the 244 resin panels that would be a kind of canvas and backdrop of color for the work, and the dots could later be affixed during installation.

To produce the 13,500 dots of varying sizes meant to evoke cells, Fox first had to create the objects in plasticine, then create rubber molds in five sizes, and then cast each dot. She says she prefers to work with resin because of its versatility.

“There’s just so much you do with resin in terms of infusing it with glitter and diamond dust and pigments and other things,” says the artist. “I’m addicted to the kind of color and transparency you can get with it, and the flexibility of it, too.”

Installation, which was carried out over six days in May, took longer than Fox had anticipated. She and her assistant worked 14 hours a day, first screwing the panels into the wall and then painstakingly arranging the dots in three layers to create color density. The first layer lies flat against the wall, the second extends out between one and one and half inches, and the third extends out as much as four inches from the wall. The goal was to create varying rates of transparency and overlap so that the work changes throughout the day as light travels through its surfaces.

Halfway through the installation, Fox showed a printout of the final project to a graduate student working in the building. “He said, ‘Oh, that looks like neurons in the brain being fired.’ I was like, thank God,” Fox says with a laugh.

With the installation now complete, she says she hopes Blue-Green Brainbow imparts a sense of both wonder and excitement. “One of the things I think artists and scientists have in common is this desire to pursue things, this thirst to find out more. I hope this work suggests that, inspires that, that it makes reference to the extraordinary work that is going on here.” 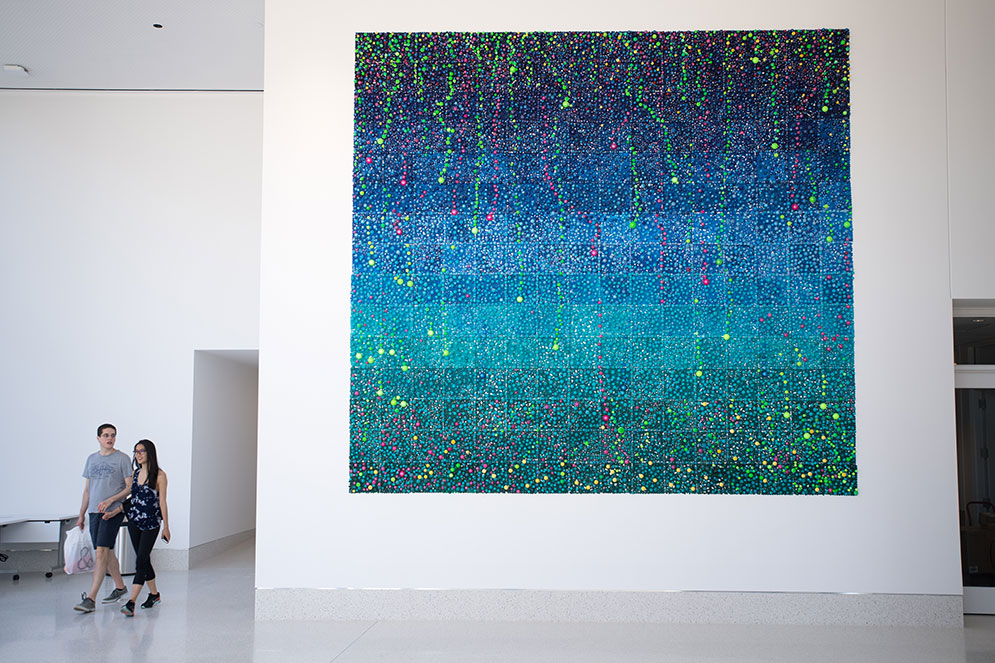 The undisputed star of the Kilachand Center lobby is Blue-Green Brainbow, a massive art installation in vivid shades of blue, magenta, violet, green, yellow, and red.

Art Inspired by Science at Kilachand Center
1
share this