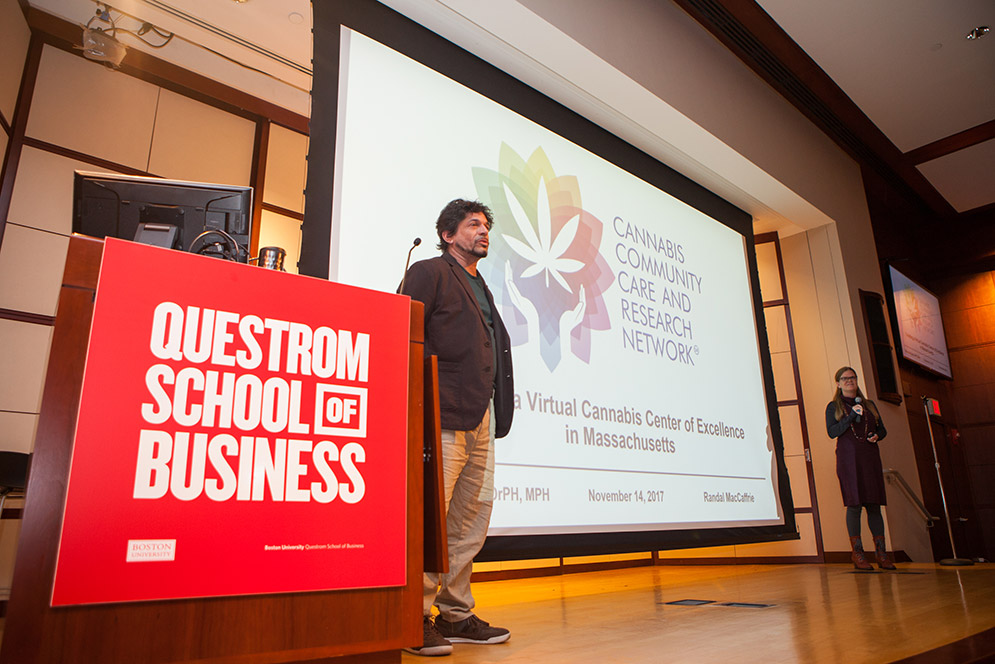 Tuesday tweets with the hashtag #cannabis4BU weren’t the work of some rogue stoner—they were promotion for an official, and near as we could tell, weed-free event at the Questrom School of Business. BU got a taste of the emerging cannabis industry as the school’s BUzz Lab drew 175 people to its Shark Tank-style Cannabis Start-up Competition.

A free booth at the upcoming December Harvest Cup cannabis-industry event in Worcester goes to the winner as well.

“This is a really big thing for us,” says Marion McNabb (SPH’16), cofounder with Randy MacCaffrie of the start-up Cannabis Community Care and Research Network, creator of the competition winner. “I’m really impressed that BU took the lead on this; it’s very smart. This will be a big industry for the commonwealth.”

Ian Mashiter, a Questrom senior lecturer in strategy and innovation, director of entrepreneurship activities, and BUzz Lab director, says the competition attracted 15 initial entrants. “This shows that talented individuals are considering career paths in cannabis,” he says. “They understand that it’s a legitimate opportunity for their talents.”

Zucker has been connecting with BUzz Lab for a couple of years, and when Massachusetts voters made adult cannabis use legal in November 2016, he decided it was time to bring this type of competition to BU. “I want BU to be on the forefront of cannabis education and show they realize it’s an industry that is coming,” he says. “For us, it’s an exciting reason to go back to our alma mater and invigorate people around cannabis.”

Green Lion provides business consulting to more than a dozen cannabis companies and runs three start-ups of its own: LeafList, a sort of LinkedIn for the cannabis industry; Natural Order Supply, for growers; and Dipstick Vapes. The company sometimes invests, and Zucker says the competition could lead them to another opportunity.

The winning concept, the Cannabis Center of Excellence, intends to bring together researchers and policymakers with hands-on cannabis experts, patients, and advocates. The goal is to document and share best practices on topics from medicinal use and cultivation to job creation and substance abuse treatment programs, in an industry where credible scientific evidence is hard to come by. “We need this,” says Jamie Lewis, one of the competition judges and founder and CEO of the Colorado cannabis-edibles company Mountain Medicine.

McNabb says the winning entry arose from a lesson learned while earning a doctorate at the School of Public Health: “It taught me how to do research and put that research into practice,” she says. “We need to advance the research related to cannabis. We need to develop public health programs and train clinicians and study that over time.”

The four finalist teams have BU ties through students or alumni, and all are ancillary, or what Zucker calls “non-leaf-touching,” businesses, meaning they do not grow or sell the plant itself.

Medicinal marijuana became legal in Massachusetts in 2012, and possession of recreational marijuana became legal for adults in 2016. But while one or both are legal in 29 states and the District of Columbia (see map here), with recreational markets providing millions in tax revenue, the business faces one challenge: marijuana is illegal under federal law, which affects banking and other types of commerce. And although possession of marijuana for personal use is legal here in the commonwealth, pot remains forbidden on campus for everyone, regardless of age, because colleges receive federal money and are bound by federal law.

Zucker says the possibility of federal enforcement action hasn’t slowed the industry in early-legalization states like Colorado, and he hopes events like the competition will give it a boost in the Bay State.

“A big part of what we do is try to elevate the industry and improve public perception of cannabis,” he says. “I think having a competition like this with a university like BU is a great look, and we’re excited to see where it leads.”