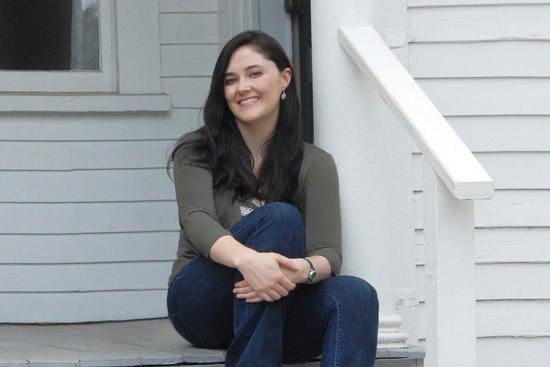 There’s not a time when Caitlin Doyle didn’t want to be a poet. As a small child, she fell under the spell of nursery rhymes, church hymns, commercial jingles, even jump rope ditties. Once she could read, she was mesmerized by the poems of Robert Louis Stevenson, Lewis Carroll, and Shel Silverstein and by the anthologies of Irish poetry on her parents’ bookshelves. And she was spellbound by her father’s stories about the playwrights, poets, novelists, and journalists he’d meet during his shifts as a bartender at the American Hotel in Sag Harbor, Long Island.

“By the time I was eight years old, I knew that I wanted to spend my life trying to conjure the kind of music that kept me returning, again and again, to the poems I loved,” Doyle says.

Today, she is an accomplished poet and has been published in The Atlantic, The Threepenny Review, and other journals. She has won fellowships from Yaddo and the MacDowell Colony, and her work has been featured on PBS NewsHour.

What distinguishes Doyle’s poetry from that of many of her contemporaries is her preference for formal verse over free verse. Meter and rhyme play a central role in many of her poems.

“I’m fascinated by poetry’s ability to take up permanent residence in the human head,” she says. “I’ve always been compelled by the way that the art form’s traditional formal elements can make a poem sear itself into the reader’s memory. There’s a paradoxical sense of unrestricted license that can come from writing within tightly established boundaries, the freedom that can be found when one allows form to lead a poem’s content in unexpected directions.”

Doyle’s affinity for formal verse has won her the annual Frost Farm Prize, awarded for metrical poetry. Named for Robert Frost (Hon.’61), one of America’s most celebrated formalist poets, the prize is awarded by the Trustees of the Robert Frost Farm and the Hyla Brook Poets, a nonprofit poetry workshop. The award comes with $1,000 and an invitation to appear as the featured speaker at the Frost Farm Poetry Conference. More than 750 poets from around the world entered this year’s competition.

Doyle submitted a poem she’d recently completed, titled Wish. Poet Deborah Warren, the 2017 competition judge, describes Wish as “a masterpiece masquerading (with its incantatory beat and simple language) as a Mother Goose rhyme,” adding “it’s also that rare poem where form is integral to the story.”

An intricate meditation on regret, Wish took Doyle a long time to shape into its final form. It is constructed of a series of couplets, each followed by a single tetrameter line set in parentheses. “The poem kept eluding me and I nearly abandoned it, but something called me back to it,” she says. “I wanted to express the complexities of a specific relationship in a way that felt both personal and universal.” Her prize-winning poem will appear in a future issue of The Yale Review.

Much of her poetry—which does include free verse—has a playfulness, a sly kind of humor about it. Her poem A Brief History of the Bikini begins:

Observe the chasm made when the atom split: a gap between the breasts and pelvis, the mid-

riff’s cover blown. Where did the fabric that fused the top and bottom go?….”

“I believe that play is a crucial part of art-making, even, and maybe especially, when it comes to the most serious of subjects,” Doyle says.

Robert Pinsky, a William Fairfield Warren Distinguished Professor, a College of Arts & Sciences professor of English and creative writing, and three-time US poet laureate, says his former student has a “gorgeous, original imagination. She has served her gift with ebullience as well as hard work. This is not the last prize she will win.”

Doyle was especially pleased to win a prize bearing Frost’s name. “Robert Frost has long been one of my favorite poets, going back to early childhood. There’s a notion of Frost as a quaintly old-fashioned relic. That’s a version that has everything to do with classrooms and nothing to do with the poet himself,” she says. “The Frost I’ve always known and loved is a poet who breaks you and remakes you with his words. He is complicated, subversive, versatile, heartrending, witty, and masterful beyond comprehension. There is no darker, truer, or more immediate poet than Frost.”

Currently a University of Cincinnati doctoral student and also assistant editor of the literary journal Cincinnati Review, Doyle says that whenever she teaches poetry, she begins the first day of class by having her students listen to Frost’s Birches read out loud, without seeing it on the page. Then she asks them to write down any language that struck them while listening to the poem. “I’ve found that this tends to open up a fruitful discussion about the relationship between sound and memorability in poetry,” she says. Next, she has her students look at the text on the page, and they discuss Frost’s use of imagery, narrative, and tone throughout the poem. “One of my goals as a teacher is for students to feel in their bodies how a poem’s rhythm can mirror its narrative movements and emotional contours.”

She credits BU’s Creative Writing Program for sharpening her skills as a poet. In addition to studying with Pinsky, she studied with Rosanna Warren and Nobel laureate Derek Walcott (Hon.’93).

“In different ways, each of them furthered my understanding of what a poem can achieve,” she says. “Robert often encouraged us to pay attention to the merging of varied diction registers in poetry, which helped me hone my understanding of how tone operates in language. In Rosanna’s poetry workshop and translation seminar, I developed a more nuanced understanding of how tradition and innovation inform each other.” She recalls a particular class with Walcott where he had students chant Thomas Hardy’s During Wind and Rain over and over again, an experience, she says, “that brought me closer to grasping poetry’s most primal powers.”

Doyle says that ideas for poems come to her in different ways. “I search my own life and the world around me for stories, ideas, and images that call out for language to give them memorable shapes. Many times, an event or individual from history will grab my fascination and I’ll gather research notes that eventually culminate in a poem. I also frequently find my pen drawn to probing elements of popular culture.”

She’s currently completing her debut poetry collection, but says she’s resisting the urge to rush the process, preferring instead to take her time to shape the manuscript into final form.

“I am compelled to uncover the strangeness that lives within the seemingly ordinary,” she says. “And to examine the unease that lingers on the edges of even our most fixed certainties. My process is frequently driven by a desire to challenge readers’ sense of a stable reality—first, by orienting them in a recognizable world when they enter a poem, and then by inviting the unsettled and the unaccountable to infiltrate their perceptions.”

Listen to Caitlin Doyle reading her poem “A Brief History of the Bikini” here.