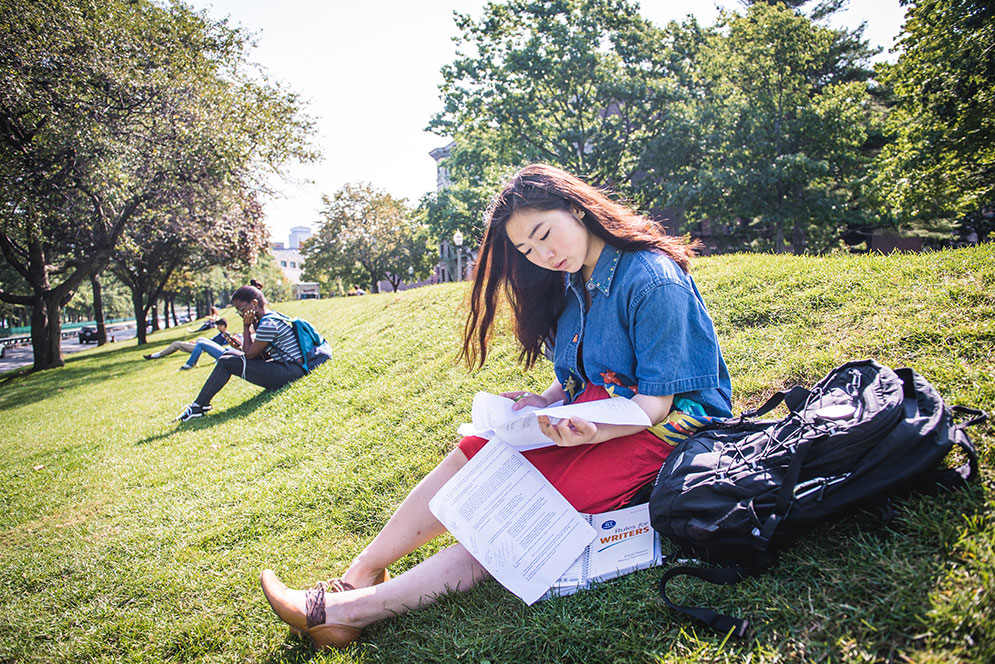 April Woo (Questrom’21) is one of several Bay Area students attending BU under an expansion of the University’s partnership with the Posse Foundation. Photos by Jackie Ricciardi

She hadn’t seen it coming, April Woo confesses, when her college and career counselor stopped her in the hallway at school last year and asked if she’d be interested in trying for a Posse Foundation college scholarship.

Woo (Questrom’21) attended Abraham Lincoln High, an off-the-tourist-track citadel of 2,000 students in San Francisco, reached each morning after a 20-minute walk through what she calls a “drab, middle-income, and predominantly Asian neighborhood.” But there was nothing drab about the shot at success her counselor offered her that day: four years, tuition-free, at one of Posse’s 57 participating universities and colleges, on the schools’ tab.

The Questrom School of Business, where she matriculated Labor Day weekend as one of this year’s 20 Posse students, “is an academic powerhouse with a challenging curriculum and faculty,” says Woo, who comes to this international campus hoping that “college will open the door to knowledge, people, places, and experiences that I will not forget, and that will enable and inspire me to push my boundaries and improve myself and my community.”

Clearly, she has the confidence of the Posse Foundation, the national scholarship program that targets urban high school students “with extraordinary academic and leadership potential.” Since its founding in 1989, the nonprofit has recruited almost 8,000 public high school students who might have been overlooked by traditional college selection processes; 90 percent of Posse students graduate from college.

This fall marks the 10th anniversary of BU’s partnership with the foundation; until now, all of those students at BU had hailed from Atlanta’s Posse program. This year, Woo and nine others from California’s Bay Area have joined the Atlanta coterie.

Because Posse has “brought amazingly diverse and talented students to BU…given the University’s commitment to expanding diversity, which extends well beyond Posse, it made sense to explore adding another [contingent],” says Laurie Pohl, a School of Education professor of the practice, who oversees BU’s Posse program.

“The Bay Area makes sense for BU because we have a lot of success recruiting students from California,” Pohl says. “When Posse added a Bay Area office, we were quick to identify it as a potential site for a second Posse” group. Doubling the number of Posse students at BU “strengthens their presence on campus and extends the network of students engaged in meaningful discussions.”

The mentor for the new Bay Area contingent, Ty Furman, director of the BU Arts Initiative, says Posse’s “principles are things I believe in strongly: community, leadership, and increasing access to outstanding education opportunities. I have seen the power and success of the Posse Foundation and its leadership scholars, and I’m thrilled to be part of the Posse family.”

Nancy Lowenstein (Sargent’87), a Sargent College clinical associate professor of occupational therapy, calls her role mentoring the Atlanta group “the most rewarding experience I have had as a faculty member during my 20 years at BU.”

The job, she says, gives her a front-row seat on a vital life metamorphosis. Her charges adjust to a massive, academically demanding institution, coming in “basically still high school students…and leaving as young men and women.”

Some Americans may downplay the value of a university education, but don’t tell that to Devin “Diem” Maxwell (CAS’21) of Posse’s Atlanta contingent, the first in his family to attend college. “Getting into BU was a very huge deal,” he says. “My family is very proud.

“I didn’t think I had any chance of making it past the first round of Posse interviews, let alone actually getting it,” says Maxwell. But he’s confident that with the support of his fellow students (one of the organization’s tenets, hence the name “Posse”), he’ll grow as a person at BU, in part because of the good fit between the University and his Smyrna, Ga., high school, which he says offers “an international curriculum for the development of globally focused” students.

“BU is a huge melting pot of different cultures and ideas, so I intend to take advantage of the diversity to expand my horizons,” he says. In addition, the University’s strong STEM (science, technology, engineering, math) education also lured this aspiring medical school student.

If anything, Maxwell says, he’s worried about finding time enough on this big campus in this big city to do interesting things when he’s not studying.

Fellow Atlanta-area Posse-er Mia Carradine (CGS’19) was the only survivor of the first-round scholarship interviews among a group of five friends who were interviewed, she says. The program was her ticket to a university where she’d long dreamed of matriculating: “As an extrovert, I have always hoped to attend a large university to expand my social climates and experience all there is about college.” (It also didn’t hurt, this soccer fanatic adds, that the BU women’s soccer team is one of the best in the Patriot League.)

While Carradine reveres the teachers at her high school, especially the one who nominated her for a Posse scholarship, she wishes the staff had made a priority of preparing and encouraging her for college much earlier in her academic career. “I will work twice as hard to ensure my success,” she says, and BU will be working with her.

By the time they reach BU, the students have already attended an eight-month college transition course through Posse, Pohl says. Once on campus, the full student contingent meets weekly with its mentor for two hours at a time during their freshman year.

Lowenstein says those discussions “can cover topics to help the scholars transition, they can be around issues that are coming up among the full Posse group itself, it can be for a fun social time—I like to celebrate birthdays.” In sophomore year, the students take over from the mentor in leading the meetings.

The mentor also meets biweekly with each individual student to go over academics, social issues, and any problems the student might have. In those meetings, Lowenstein says, her role is “gaining their trust and…supporting them in decision-making and leading them to resources on campus.”

Through such forums, Pohl says, the mentors and older Posse students help newcomers learn to support one another, so that “they always have each other’s backs.”

Judging from experience, the new arrivals can expect a successful future. Past BU Posse students have gone on to diverse careers, ranging from the Boston Public Health Commission to municipal bond analyst with State Street Corporation.

There is 1 comment on BU Doubles Number of Posse Scholars