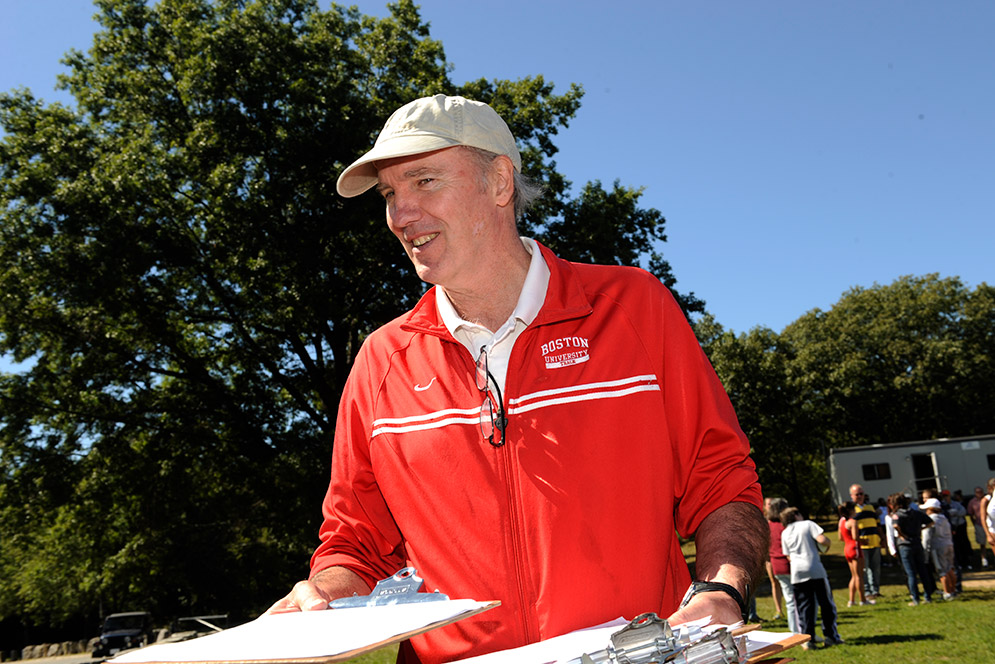 Coach Bruce Lehane had great success with BU teams, but his advice about life off the track was even more important to many of his athletes.

Katie Matthews ran for five years for BU’s longtime head cross country coach and assistant director of track and field Bruce Lehane, who died September 23. She can still reel off her best times if you ask. She now runs professionally with the Boston Athletic Association’s High-Performance Team. But ask her which advice of Lehane’s mattered most and she veers off track.

“Bruce would always talk about the relationships you build in life and helping other people and giving back,” Matthews (Sargent’12,’14) says. “Thinking about that made me realize that I wanted to do something besides running professionally.”

Last November, Matthews added a part-time job to her résumé, using her BU degrees as a speech and language pathologist at a sensory integration center in Newton to help children with autism and others to overcome a variety of speech and language disorders. It’s satisfying making a difference in their lives, she says, even a small one.

“Bruce always did a great job of making sure you were well-rounded as a person and helping you know that you could do more than one thing,” says Matthews, who wrote a tribute to Lehane in the online running magazine Citius September 25.

Lehane, who was 68, had been battling ALS. He will be remembered at a Marsh Chapel memorial service tomorrow, November 1, at 6 p.m., led by his friend Rev. Jeri Katherine Warden Sipes (STH’10). Among the speakers will be 1968 Olympic gold medal hurdler David Hemery (Questrom’68, SED’88) and Drew Marrochello, BU director of athletics. Sipes says that Lehane “was one of those people you meet and you know you’re going to be lifelong friends.” A reception will follow at the Track & Tennis Center.

“He came in every day through May,” says Robyne M. Johnson, director of men’s and women’s track and field and cross country. Even when he needed a wheelchair to get around, she says, he still prescribed workouts for students and timed them on the track. Lehane’s son Elliot was a part-time coach and helped him with things he wasn’t able to do. “We have kids on the team that Bruce recruited last year that ended up coming here,” Johnson says.

“He loved being at BU, he loved track and field, and it was an opportunity for him to maybe not think about what was going on with himself all the time,” she says. “He still had his wit, he was still Bruce.”

As head cross country coach and assistant director of track and field, Lehane coached 50 All-Americans, 2 NCAA Division 1 national champions, and 2 Olympians, and he guided Rich Peters (CGS’12, COM’14) to a runner-up finish in the mile at the 2012 NCAA Championships.

“He could see the bigger picture,” says Johnson. “We had a lot of walk-ons that most D-1 schools probably would send on their way, but he still took them in and if there was something to get out of them, he definitely got it. We had some kids go on to be All-Americans who either walked on or had a very small scholarship and developed so much. He got them to where they could be. And if we had a kid that was very talented, he could get them to the next level as well.”

“I think he had this theory that if you just put in the work and were consistent, that you could exceed your expectations,” says Matthews. “It was the classic ‘there is no secret to this’—just putting in the hard work and being accountable and doing what you needed to do, and then things could happen.”

“He is an icon in coaching, and his long and distinguished career of accomplishments speaks for itself,” Marrochello says. “The real way to measure Bruce is the lasting impact he left on his athletes’ lives. His athletes, and there are hundreds if not thousands of them, absolutely revered Bruce because they knew he truly cared even more about their well-being and potential as people than he did about their running time.”

BU renamed its annual Scarlet and White Invitational for Lehane last February. As previously planned, he will be one of six inductees to the BU Athletic Hall of Fame at the 52nd induction ceremony on Saturday, November 4, at noon, at Agganis Arena.

Boston University will honor the life of Bruce Lehane with a memorial service at Marsh Chapel, 735 Commonwealth Ave., on Wednesday, November 1, at 6 p.m. A reception at the BU Track & Tennis Center, 100 Ashford St., follows. Parking for the memorial service will be available at the Warren Towers Garage, 700 Comm Ave., and for guests attending the reception, at the Langsam Garage, 278 Babcock St.