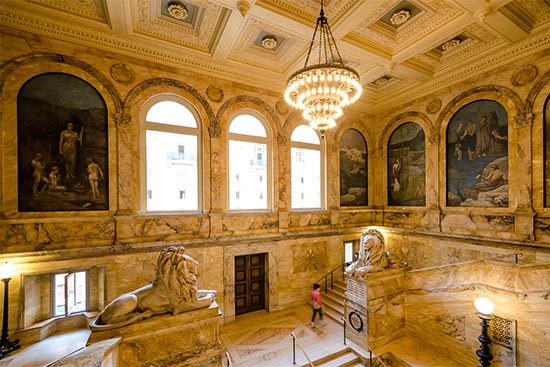 The Boston Public Library is home to an astonishing 23 million items. In addition to books (including the personal library of President John Adams), it houses thousands of rare manuscripts, photographs, maps, musical scores, and prints. Copley Square’s central branch also has magnificent art and architecture treasures. And you can see many of them during daily free guided tours. Tonight’s Art and Architecture tour is at 6 p.m. (Times vary by day; see kicker below.)

The central library comprises two buildings: the original McKim Building, designed by architect Charles Follen McKim, which opened in 1895 and was designated a National Historic Landmark in 1986, and the recently renovated addition by Philip Johnson, opened in 1972 and reopened to the public in fall 2016.

McKim famously described his building as a “palace for the people,” and it is filled with some of the finest architectural details and murals in North America. Tour takers will see Bates Hall, considered one of the most architecturally important rooms in the world. The hall is dominated by a majestic barrel-arched ceiling and an ornately carved limestone balcony and contains busts of famous authors and Bostonians. The room is named for Massachusetts native Joshua Bates, a London banker who gave the city $50,000 for a public library in 1852.

Among other tour highlights are the stunning series of murals by French artist Pierre Puvis de Chavanne that surround the McKim’s grand staircase and second floor gallery. The eight stairway murals represent the main disciplines of poetry, philosophy, and science. The central mural is titled The Muses of Inspiration Hail the Spirit of Light. The recently restored 160-pound Philosophy panel, one of the tour’s most photographed and recognizable stops, has been returned to its alcove in the grand staircase. The restoration has earned the BPL and the conservation team a Preservation Achievement Award from the Boston Preservation Alliance.

The tour includes John Singer Sargent’s collection of murals Triumph of Religion. Installed between 1895 and 1919, the works depict the development of world religions using materials such as plaster, papier-mâché, and metalwork. Singer, best known for his landscapes and portrait paintings, believed his BPL murals to be the most important work of his career.

Fans of the King Arthur legend will be dazzled by The Quest of the Holy Grail, a mural cycle of 15 panels depicting 150 life-sized figures from the Arthurian legend, in the McKim Building’s Abbey Room. The room’s beamed ceiling is modeled on that of the 14th-century Doge’s Palace in Venice.

The hour-long tours are led by trained volunteer guides, but visitors are also welcome to tour the buildings on their own, with printable guides that can be found here.