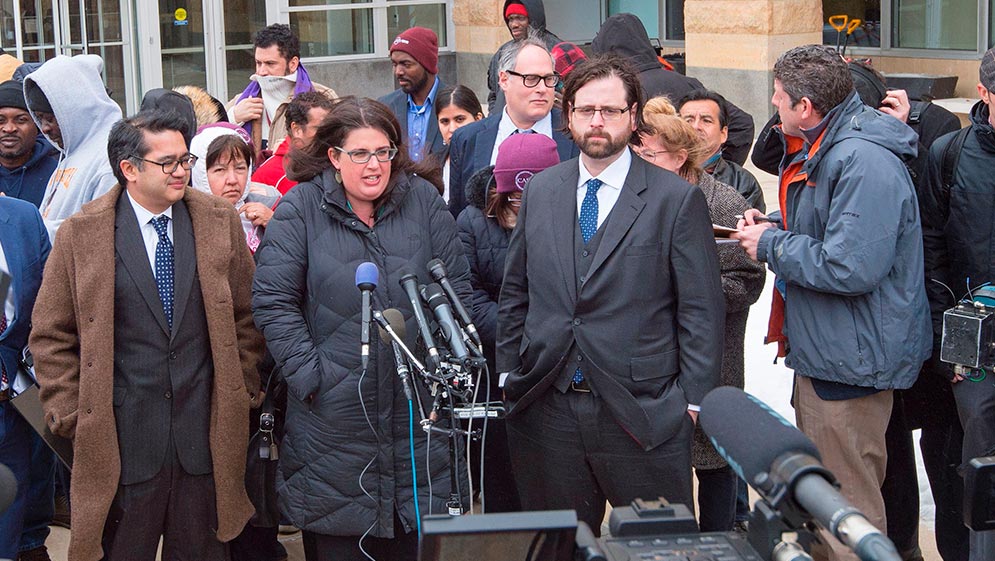 Becca Heller (center) of the International Refugee Assistance Project talked to reporters after her group and others filed suit against President Trump’s travel ban. Photo by Paul J. Richards/AFP/Getty Images

Boston University is supporting a federal lawsuit challenging President Trump’s executive order on immigration for the second time in as many months, joining an amici curiae (friends of the court) brief in support of groups and individuals seeking to enjoin enforcement of the executive order that was issued on March 6, 2017.

The University and 30 other institutions, including the 8 Ivy League colleges and many members of the Association of American Universities, filed the amici brief in the United States Court of Appeals for the Fourth Circuit, a federal court that hears cases filed in the states of Virginia, Maryland, West Virginia, and the Carolinas. The brief is being filed in the Fourth Circuit because it is the first federal appeals court to review a lower court’s decision blocking the order. In February, BU joined seven Massachusetts universities in a similar brief supporting a lawsuit filed in Massachusetts challenging Trump’s first executive order, issued January 27.

Erika Geetter, BU vice president and general counsel, says that Boston University was glad to lend its support to the collective effort of nationally renowned universities to educate the court on the real harms occasioned by the executive order.

“An amicus brief provides the opportunity for institutions that are not parties to a case to present additional facts that they believe will assist the court in reaching a just result,” says Geetter. “In this case, the universities were able to give many concrete examples of the ways in which the blanket ban on individuals from the specified countries had far-reaching implications for our educational missions.”

The latest brief was filed in a case in which a federal judge in Maryland issued a nationwide order temporarily blocking Trump’s 90-day ban on immigration from six mainly Muslim countries: Iran, Libya, Syria, Somalia, Sudan, and Yemen. The judge issued the ruling in a case filed by several plaintiffs, including the International Refugee Assistance Project and the Middle East Studies Association of North America, against the federal government. A federal judge in Hawaii has also indefinitely halted the ban and another provision of the order, which excludes all refugees for 120 days.

“In light of their educational missions,” the brief continues, “amici have a strong interest in ensuring that individuals from around the globe can continue to enter the United States and share their unique skills and perspectives.…So too, by studying in the United States, they gain a greater understanding of and appreciation for the values we hold dear, including democratic principles and respect for the rule of law, tolerance, and human rights, values which they may then share with citizens of their home countries.”

The brief explains that universities have students, faculty, and scholars from the six nations that are harmed by the executive order’s travel ban. In addition to affecting individuals from those countries, the order has triggered other harmful consequences for US academia: for example, “faculty members from around the world already have called for a boycott of academic conferences in the United State in response to the Executive Order…” Beyond that, it says, “by contemplating further categorical entry bans based on national origin,” the order hampers universities’ ability “to attract the brightest, most talented students, faculty, and scholars from around the globe.”

Those negative effects, the universities argue, are occurring “absent any evidence that all or even an appreciable number of nationals from these six countries—all of whom already undergo significant vetting by the government before being permitted to study or work here—pose any threat to the safety or security of the United States or amici’s campuses.”