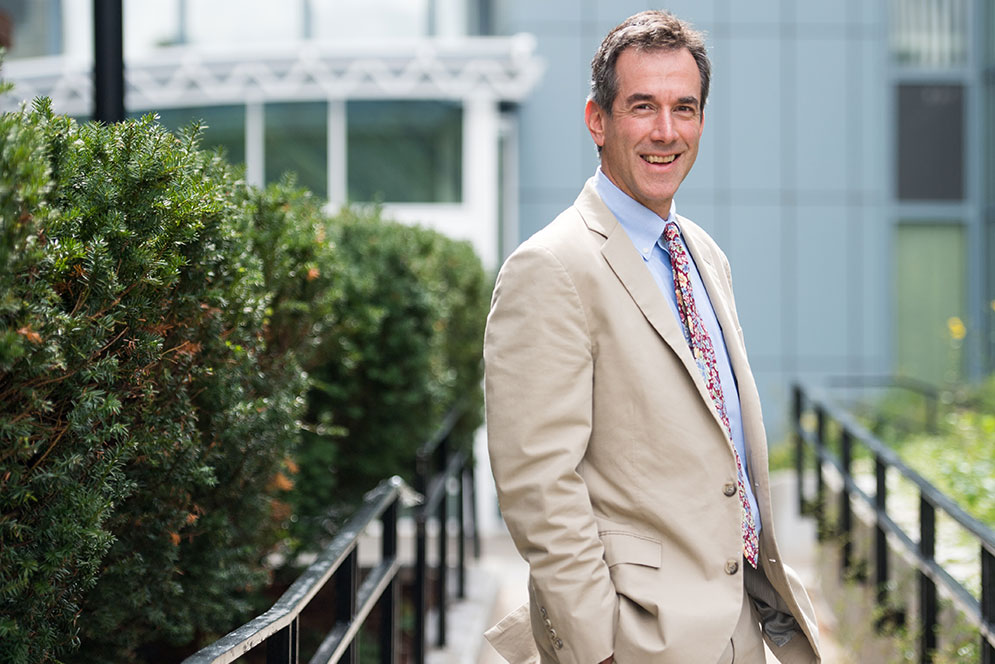 Andrew Budson directs the Alzheimer’s Disease Center’s National Institutes of Health–funded efforts to educate clinicians and the public in better understanding the disease and related disorders as well as to encourage people to participate in research. Photo by Cydney Scott

The National Institute on Aging, part of the National Institutes of Health (NIH), has awarded Boston University’s Alzheimer’s Disease Center a three-year, $5.4 million grant to continue its research into interventions that will reduce the human and economic costs of Alzheimer’s disease and its related conditions, which includes chronic traumatic encephalopathy.

Dozens of researchers at the Alzheimer’s Disease Center (ADC) are running clinical trials that may lead to treatments and a cure for the disease. They are looking for tests that could lead to early diagnosis and interventions to prevent or delay the disease, working to understand genetic risk factors, and studying the effect of the disease on caregivers. The center recently identified two genes responsible for Alzheimer’s disease in African Americans. Located on the BU Medical Campus and at the VA Boston Healthcare System in Massachusetts, the ADC is one of 32 NIH-funded Alzheimer’s centers in the United States.

The NIH’s support “has helped our researchers and clinicians undertake and further their research and educational mission by taking crucial steps forward to combat this disease,” says ADC director Neil Kowall, a School of Medicine professor of neurology and pathology. Kowall is also chief of neurology at the VA Boston Healthcare System.

Alzheimer’s is a progressive and ultimately fatal disease that attacks brain cells, causing memory loss, behavioral changes, confusion, and severe deterioration of language skills. Associated with advancing age, the disease afflicts more than 5 million Americans 65 and older, and the National Institute on Aging projects that number could reach 16 million by 2050 unless effective interventions are found. Alzheimer’s and other forms of dementia are projected to cost the nation $259 billion this year and the figure could reach $1.1 trillion by 2050, according to the Alzheimer’s Association.

The NIH grant, and the research it enables through the ADC, “is extremely important from a public health standpoint,” says David Greer, a MED professor and chair of the neurology department, which includes the ADC. “This is a disease that affects people from all walks of life, every race, both genders. It doesn’t matter what your socioeconomic status is, or how much or how little money you have. It affects everyone.” Research, says Greer, is crucial for “improving the quality of life for people with the disease, and hopefully, developing some type of cure or treatment.”

As director of the ADC’s Education Core, Andrew Budson, also a MED professor of neurology, leads the center’s NIH-funded efforts to educate both clinicians and the public in better understanding the disease and related disorders as well as to encourage people to participate in research.

The latest NIH funding is a renewal of a research grant it has been awarding to the ADC since it was established in 1996, says Budson, ADC associate director of research and VA Boston associate chief of staff for education. In addition to research on Alzheimer’s disease, NIH funding to BU has made possible the center’s research into chronic traumatic encephalopathy, which has led to discoveries on repetitive brain trauma in athletes and military personnel.

“These centers across the United States are here to facilitate research in Alzheimer’s both in collaborating in big, national initiatives,” he says, “and in helping local investigators to conduct their own innovative research projects.”

Budson, for­ example, is working on interventions that won’t prevent, cure, or slow the disease progression, but will nonetheless improve the lives of patients and their families. “Our work has shown that individuals with mild cognitive impairment ­­­can use different strategies to improve their memory—strategies that can be applied to their day-to-day lives,” says Budson. The goal of this work, he adds, is to allow people to stay at home and remain independent as long as possible.

Alzheimer’s disease is the sixth leading cause of death in the United States and the only one among the top 10 without a way to prevent, slow, or stop its progression, according to the Alzheimer’s Association.