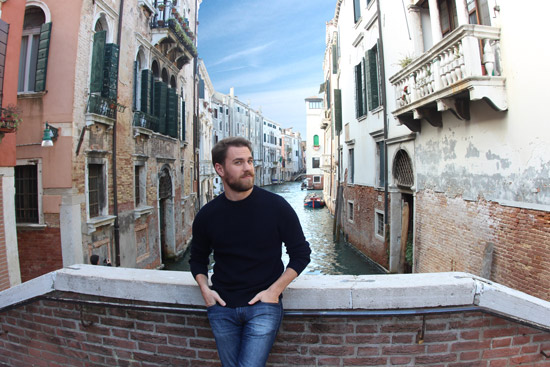 Evan Puschak (COM’10) is the creator of the Nerdwriter, a YouTube channel with more than 1.2 million subscribers currently. Photo courtesy of Evan Puschak

Evan Puschak wanted to be a filmmaker when he came to BU, and in a way, he has done that. Puschak (COM’10) is the creator of the YouTube series the Nerdwriter. Through video essays, he examines a wide range of subjects, from art and literature to culture, science, and—most of all—language. The Nerdwriter recently surpassed a million subscribers, and its success has resulted in Puschak’s being chosen for Forbes magazine’s “30 Under 30” Media list of people who are “defining and driving the world of news and content.”

Whether he is speaking about the music of Drake, how E. E. Cummings writes a poem, or even how Donald Trump uses language, Puschak works hard every week, he says, to “bridge the gap between the layman and the expert.”

Yet despite his apparent expertise, he was late to learning. “I woke up to learning while I was at Boston University,” he says. “I remember going to the Barnes & Noble in Kenmore Square and taking out a book, getting a coffee from Starbucks, sitting down, and really becoming so addicted to learning new things.”

He used to skip classes to read about the philosophy of ancient Greece, the Enlightenment, or Ralph Waldo Emerson. “I think it was about sophomore year where it all started,” he says. “And the Nerdwriter is a direct outgrowth of that period.”

After graduation, Puschak dropped filmmaking and moved to Paris for six months to write a novel, then moved to Los Angeles to try to sell it. While doing that, he noticed that author John Green was using YouTube to build readership for his new book. Puschak thought he’d give it a try.

“Within about 15 weeks I really fell in love with YouTube, not knowing that it was something that could possibly be a career,” he says. “I sort of discovered that it was this perfect mix of all of my skills and knowledge.”

His videos quickly drew attention from MSNBC, and he was offered a job in New York, where he stayed for three years. Then Discovery Digital Networks asked him to help launch a YouTube show. He enjoyed both jobs, but wanted to control his work. So a year and a half ago, deciding to try to “live or die” by his own work, Puschak left to do the Nerdwriter full-time.

“It’s very hard during those times where you’re putting a lot of work into something and it’s not getting the play you feel it should,” he says. “You put your blood, sweat, and tears into these things.”

His advice for BU students? Puschak says he wishes he’d taken more liberal arts courses. If you need to, you can teach yourself film, he says, but “there is a lot of value in having great professors teach you about different random subjects. If you’re doing something that is not going to require graduate school, just widen your horizons. Learn about a lot of different things, because that’s the kind of stuff that you’ll use later on in your life.”

Louise Baigelman has loved books since she was a child.

“Any walls that my parents could turn into bookshelves, they did,” says Baigelman (SED’11). But she also learned early on that many people didn’t have the kind of access to literature that she had. Her middle school required students to work on service projects every Wednesday for four hours. So each week she volunteered at an elementary school or a day care center for homeless mothers in inner-city Philadelphia. Many children and mothers were held back by illiteracy—it wasn’t that they didn’t want to read books, it was that they couldn’t.

“So that was my first exposure, and I was startled by the fact that 15 minutes from my house people were experiencing different realities,” Baigelman says. “That was my first spark that this was something that was interesting to me.”

After graduation she saw these same problems as a middle school teacher. Some of her students, especially ESL (English as a second language) learners, couldn’t read the middle school books they might find interesting and didn’t want to read the first grade books that they could understand. “It’s embarrassing, it’s uninteresting,” Baigelman says, “and so for those students it’s hard to get them to read—you can’t really offer them anything they want to read.” So she decided to do something about it.

What she did about it two years ago landed her on the Forbes “30 Under 30” list in Education. She found Story Shares, a nonprofit that crowdsources writers to create books tailored for middle school students who read below grade-level.

The successful Boston-based nonprofit now has about 300 books available online, free to anyone. The books can also be downloaded as PDFs, and many are paperbacks sold and shipped to readers. Baigelman says that they are about to add hundreds more stories. That’s important, she says, because if you want to reach a new reader, you have to make sure you have something they are interested in. To keep the books coming, Story Shares holds periodic writing contests. Published writers can get small royalties for their work—money that many choose to donate to the organization. Baigelman says most of the writers aren’t there for the money.

“Writers are just inherently into literacy, because they are writers,” she says. “They care about writing and reading. There are so many readers who need this type of story, and a writer can make a bigger difference for literacy more broadly and help an underserved group. That’s motivating for people.”

Finding readers for those books is the bigger problem. By the time many students reach middle school, they’ve already decided they aren’t readers and don’t like books. Baigelman says that Story Shares has had more success going through teachers, but it’s still hard. “How do we connect with the right schools? How do we connect with the right people in the school? How do we send the message about what we are doing?”

The small nonprofit is trying to answer these questions, even as it expands.

Story Shares has reached 53 countries, 49 states, and 350 schools. Like any start-up, Baigelman says, things are still a bit shaky, but she’s confident that the organization will continue to make a difference.

“We have been inspired by the feedback we’ve gotten,” she says, “teachers saying that students who were previously totally uninterested in reading, or refused, or just goofed off during independent reading time now finish a Story Shares book and ask, is there another one like this for me to read?”

Also making this year’s Forbes’ “30 Under 30” lists are three other BU alums and a BU Academy graduate. Raphael Arar (CAS’09), one of IBM Research’s principal designers, was named under Enterprise Technology. On the Healthcare list are Niko Skievaski (GRS’10), cofounder of Redox, which helps transplant health care data across different platforms, and Emilia Javorsky (SPH’10), who was recognized for her work as a physician-scientist at Massachusetts General Hospital. Under Retail and Commerce is Sam Roberts, a 2008 BU Academy graduate, who cofounded NaturAll Club, which sells hair products over the internet for women of color, or with especially curly hair.

Ian Evans can be reached at ianevans@bu.edu.

There are 2 comments on Five Alums, BU Academy Graduate on Forbes “30 Under 30” Lists