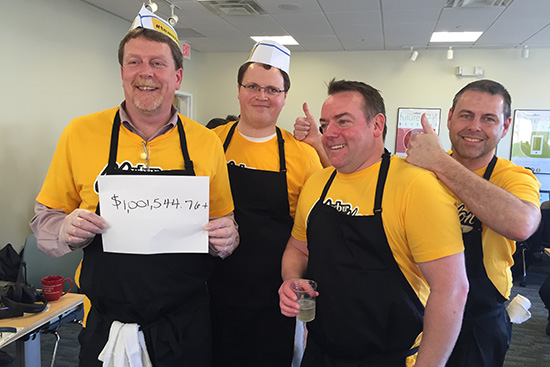 Karl Voelker (from left), Dave Desrosiers, Doug Wilson, and Rob Robinson are among the WBUR staffers celebrating the success of the truncated fundraiser that raised $1 million Friday. Photo courtesy of Anthony Brooks

Steve Martin once joked that he had three easy steps for becoming a millionaire: “First, get a million dollars. Then…”

The station last week compressed its spring on-air fundraiser—normally a weeklong affair—into a 26-hour Marathon and raked in just north of its $1 million target ($1,005,027, to be exact). Other NPR stations have had similar short fundraisers, but none have raised so much, WBUR general manager Charles Kravetz says.

“We know that WBUR and all public radio stations are going to have to transform themselves and spend less on-air time fundraising,” he says. “We get listeners who say, ‘You’re driving me away. I can’t listen to this for this long.’ No one loves fundraisers, but it’s a central core of our revenue stream here.”

Given the Marathon’s staggering success, Kravetz predicts that it “will be a new paradigm for a lot of stations.…Every station will have to adjust its goal to the size of its audience. We’re in the 10th largest radio audience in the country. But every station in the country, I believe, could probably take one of its fundraisers…and give it a try. I bet they could do it.”

The idea for a 26-hour sprint (to be precise, it clocked in at 26.2, an actual marathon being 26.2 miles, starting at 7:48 a.m. Thursday and wrapping at 10 a.m. Friday) was hatched by Kravetz and massaged by his membership team as a roll of the dice. Just how much of a gamble it was became clear going into Friday’s final stretch.“We had to raise almost $175,000 between 9 and 10 o’clock in the morning,” which normally would require a full day of audio pleading. “We didn’t think it was possible,” he says.

“The last hour was one of the most extraordinary hours I’ve ever spent in media in my career,” he adds. “It was thrilling and nail-biting.” It was also live-streamed on WBUR’s new Facebook streaming system, and 1,337 unique viewers tuned in.

Listeners responded enthusiastically, expressing gratitude for the shortened drive by email, Twitter, and phone. Many sustaining donors who give monthly said they were upping their contributions as a way of encouraging the station to shorten fundraising more often, according to Kravetz.

The money raised, which came from almost 9,000 donors, will go into the station’s general operating fund. Its weeklong October fundraiser, the biggest of the year (it has netted $1.7 million in the past), will remain at its usual length of five or six days. But “given our success with this Marathon,” the general manager says, “we’ll continue to attempt to do one-day fundraisers in the spring.”