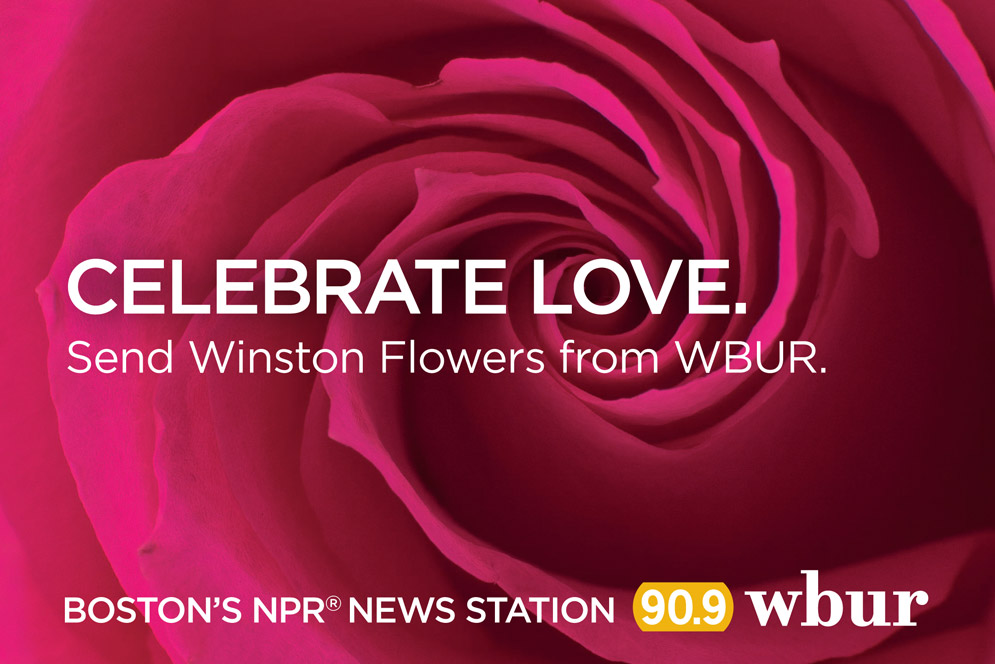 As part of its annual Valentine’s Day flowers fundraising campaign, WBUR has extended a 25 percent discount to members of the BU community. Photo courtesy of WBUR

Thanks to its Valentine’s Day fundraiser partnership with Winston Flowers, WBUR has been feeling the love, to the tune of nearly $1 million in annual donations. This year BU’s National Public Radio station is sweetening the deal for the University community with the offer of a discount of up to 25 percent on flowers delivered to someone special, with proceeds going to the station, which is based on the Charles River Campus. And for the first time, WBUR donors can extend the gesture, with flower arrangements sent to the recipient every month for a year.

With the BU discount offer, “WBUR Loves BU,” arrangements run from $127.50 for a dozen roses to a $900 donation for the “design of the month” option. Those taking advantage of the promotion can have the flowers sent anywhere in the continental United States, through either Winston’s network or a partnering florist. The discount offer extends through Wednesday, February 10.

“We value the relationship we have with WBUR and strongly support public radio,” says David Winston, who owns the flower company with his brother, Ted. “Listeners who send our roses for Valentine’s Day feel good about helping the station and those on the receiving end appreciate a gift from Winston Flowers.”

Michael Steffon, WBUR director of membership and campaign strategy, says WKSU, in Kent, Ohio, came up with the Valentine’s Day flower fund-drive idea in the 1990s. NPR then coordinated a national effort, and several stations, including WBUR, participated. NPR later opted out of the effort, but about 10 years ago, “WBUR saw great potential in the idea and pursued it locally,” Steffon says.

“In our first year, working on the program together, we raised $525,000,” he says. “This year we anticipate generating approximately $1 million and sending out more than 6,000 orders throughout the region and across the country.”

“One of the beautiful things about the program is that we basically give our listeners an opportunity to benefit WBUR by doing something they’re going to do anyway,” Steffon says. “The partnership is fantastic, the flowers are gorgeous, and we’ve got four different offers.”

Wendy Weiss of Cambridge says the flowers carry a dual message for her. Receiving the flowers every year from her husband, she’s a beneficiary of the fund drive along with WBUR. “Every time I open the box—and it’s been many years—I can’t believe how beautiful the roses are,” Weiss says. “They signify love from my husband, but also show the love of both of us for the station, because we’ve been listening to NPR for nearly 40 years.”

To take advantage of the BU community discount, order here.

WBUR Has Rosy Offer for BU Community
0
share this