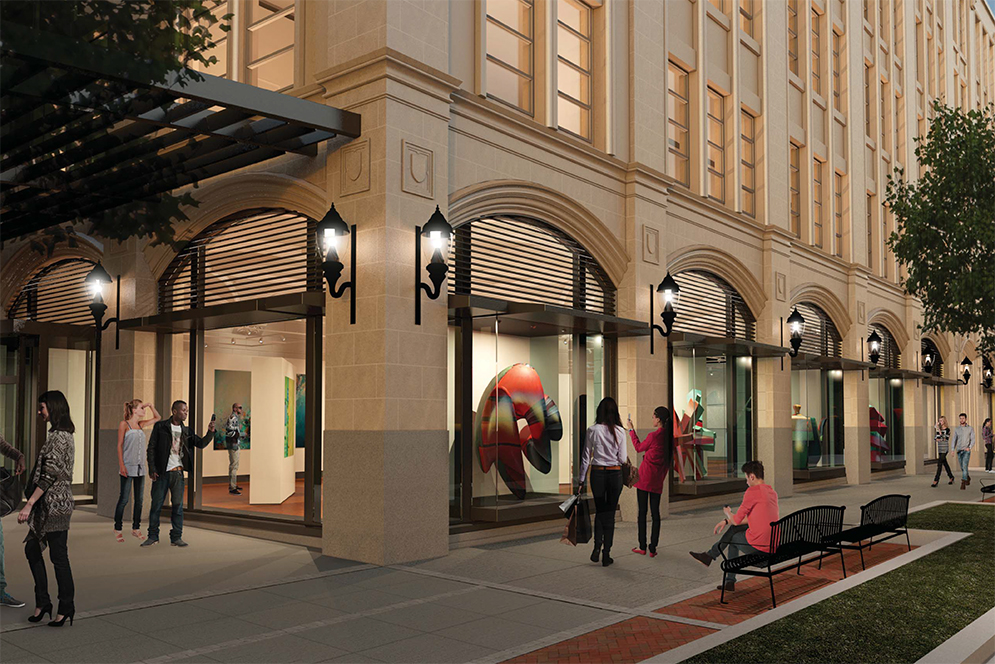 An artist’s rendering of planned renovations to the façade of the College of Fine Arts, 855 Comm Ave. Image courtesy of Wilson Butler Architects, Inc.

Over the next few years, BU’s Charles River Campus will see some invigorating changes along the stretch of Commonwealth Avenue that houses the College of Fine Arts. The University is bringing the theater arts program back to Comm Ave after a 33-year residence at the Boston University Theatre on Huntington Avenue, and to that end, a new studio theater and a production facility will be built on the 808 block and a makeover of 855 will replace its forbidding street-level concrete façade with arched windows.

President Robert A. Brown has announced that the University has committed $50 million to these three projects. That amount will include the funds from the sale of the BU Theatre and more than $20 million of new funding. “The programs of the College of Fine Arts are critical assets to the University,” says Brown. “Relocating our theater program for the majority of students’ education and for production will help us bring the arts to the entire Boston University community.”

“The arts are an essential component of the BU experience, and it is critical that we offer modern, dynamic settings in which our students can learn, create, and perform—settings that are in keeping with our standing as a global research university,” says Jean Morrison, University provost, who last year convened a CFA task force that is due to report in June on its vision for the college’s future. “We are extremely excited about the opportunities for new exploration and expression afforded by the changes set to take place on Commonwealth Avenue and in our theater program in the months ahead. This is an important institutional investment in the arts.”

The brick-and-mortar aspect of CFA’s new vision for the 21st century began in 2008 with the $15 million construction of state-the-art practice rooms for the School of Music. The next phase will  start with the renovation of the first floor and the Faye G., Jo, and James Stone Gallery and restoration of the façade and windows at 855. This will allow those passing by to see inside, bringing vitality to the street while promoting an openness for CFA’s artists to better engage with the community. A second project, still in planning and design but scheduled to be completed before fall 2016, will accommodate the flourishing graduate graphic design program by developing new space on the fourth floor at 808, in closer proximity to graduate painting and printmaking. Design work for those projects is being handled by Wilson Butler Architects of Boston. The last components will relocate the theater production center and create a new 250-seat studio theater in the 820-846 area of Commonwealth Avenue, west of 808. Elkus Manfredi Architects has been engaged, and the project is still in the early planning and design phase. The studio theater is scheduled to open in fall 2017; CFA will continue to use the Huntington Avenue theater through the end of the spring 2017 semester.

Lynne Allen, CFA dean ad interim, says the makeover of 855 “refurbishes the grandeur of the building,” and uses windows to create “an open dialogue with the community, showcasing what goes on inside.” An example of that is the School of Visual Arts graphic design program’s temporary pop-up studio, opened at the former Cecilia’s Pizza across from 855. “It’s reflective of a national trend of arts organizations to create pop-up artistic displays that become interesting surprises for those walking by and extend the value of art beyond a formal gallery space,” Allen says, adding that opening up the ground floor of 855 with windows will let passersby glimpse the creative activities going on inside.

The projects are intended to energize the stretch of Comm Ave where CFA is situated in a disjointed arrangement that occasionally hinders collaboration among the three schools. The changes reflect what Jim Petosa, School of Theatre director, calls a “strategic configuration of having the arts matter in a current university environment.

“The University has made certain commitments that will make us capable of fulfilling our work in appropriate laboratories and make the arts relevant,” says Petosa. “Putting a new theater in what is the center of campus makes a huge difference in terms of the University’s optics—right now it’s way off the beaten path. It will help create a sense of vitality.”

The new studio theater will not replace the BU Theatre’s proscenium stage, which is now used for CFA operas and other larger-scale productions. But the University recognizes the need for a large proscenium space and has underscored its commitment to lease major venues throughout the city, Petosa says, and this also points to a positive change. “In two years you’ll see that change, as we reach out into the city to lease spaces we haven’t performed in before. We’re reaching in, and we’re reaching out.”

Richard Cornell, School of Music director ad interim, says the CFA Opera Institute will also benefit from the new construction. Now tucked away in the back of 808, the Opera Institute will “have more welcoming access,” enabling an easier flow between it and the School of Theatre. Cornell is looking forward to “a new flexibility, with more flexible programming,” both in the schools and among them.

Through the BU Arts Initiative, based at the Office of the Provost, CFA will also continue to extend its reach throughout the Charles River and the Medical Campuses. “Since the creation of the BU Arts Initiative, we have been able to provide or support programming that has engaged students from every undergraduate and graduate school and college at BU,” says Ty Furman, the initiative’s managing director. “We have provided arts programming support or partnered on programming with more than 30 faculty and staff from 8 different schools and programs.” The initiative’s Arts Insiders Program has provided free tickets to Boston-area events for more than 150 students, with more than half going to first year and international students. In addition, the initiative has supported the creation and programming of three new student groups: the BU Visual Arts Club, Articulate, a student group focused on public art, and BU STEAM (Science, Technology, Engineering, Arts, and Mathematics).

“All of these developments,” says Allen, “benefit the entire University community.”

There are 21 comments on University Commits $50 Million for CFA