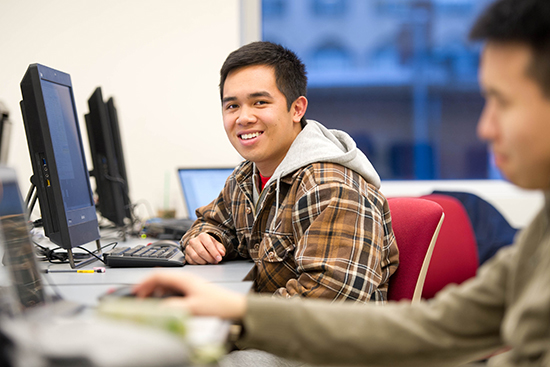 Brandon Phan (ENG’16) knew last August, after an internship, that Bank of America would hire him after graduation. Photo by Chenyao Xu

The bad news for Nicholas Morrison last fall was that he had no idea where he’d be after he graduates in May. The good thing was what he did know: he’d be gainfully employed.

In fact, Morrison (ENG’16) got an inkling of that important detail of his future last summer, after he wrapped up an internship at Fast Enterprises, a software-consulting firm with government clients at various levels nationwide. On his way out, his bosses told him, “‘We’ve put in recommendations for you’” for a job after graduation. By early fall, he’d gotten an offer.

Morrison is able to experience the joys of a senior year secure in the knowledge of employment in part because the job market facing graduating seniors is the best in years. The National Association of Colleges and Employers estimates that employers will hire 11 percent more 2016 graduates in their US operations than they did from last year’s Class of 2015.

And in turn, last year’s hiring was up from the previous year’s by almost 10 percent—and in 2014 hiring was 8 percent better than in 2013. On Friday, the government reported that US unemployment dipped to its lowest level in eight years.

Hard stats on how BU grads are faring job-wise won’t be available until the Center for Career Development (CCD) surveys graduating seniors about their employment prospects after Commencement. Anecdotally, though, you easily can find evidence here of a better economy. Some Terriers, like Bhumika Salwan (Questrom’16), who has secured a job as a Liberty Mutual business analyst after graduation, relied on Questrom’s career links, an online management tool with information about jobs and internships, career-related events, and résumé postings, as part of CCD’s own link.

“I’m doing finance and accounting, and a lot of finance and accounting jobs are being filled right now,” says Salwan, who had her first interview at Liberty Mutual within a week of checking out the Questrom career link. “I gave myself a deadline of December: If I don’t have a job by then, I’m going to freak out.” She counts herself lucky compared to friends in last year’s graduating class—many of them, she says, had to wait until March before pinning down work.

The recovering economy has allowed seniors like Frederick S. Pardee School of Global Studies student Amanda Bierschenk (CAS’16) to be choosy shoppers, turning down job offers in anticipation of something better. The positions she was offered were “very low pay with extremely long hours,” she says, and she’s considering temporary stints such as Teach for America.

“I’m really just looking for a way to fill a few years before grad school in a meaningful way, rather than searching for my lifelong career at this point,” says Bierschenk, who plans to seek a master’s degree eventually and then work for a human rights NGO.

“I’m a journalism student with a focus in magazines, and that industry tends to begin the hiring process in the spring,” says Emily Goldman (COM’16). With hopes of working for a fashion or lifestyle magazine, she learned the ins and outs of the field’s hiring rituals while interning for several publications, including Marie Claire, Elle, and Boston magazine.

“There are limited positions available for entry-level jobs,” Goldman says. “The turnaround for these editorial assistant positions is one to two years, and therefore it’s really hit-or-miss, depending on when you’re applying and when someone leaves or gets a promotion.” She remains optimistic, however: “The market seems hard, but not impossible, and definitely much better than our counterparts had 10 years ago.”

As for advice to job-seeking peers, students interviewed suggest availing themselves of BU’s resources, such as the Center for Career Development and individual schools’ career links. Looking at lots of employers, and networking in lots of ways with them, is also wise.

“Apply to as many places as possible…and try to forge some kind of a relationship with them outside of that,” Morrison suggests. “Just applying to them isn’t really helpful. There are thousands of kids applying. They’re all very smart. They’re all very accomplished.”

Meanwhile, future years’ graduates should remember that the early bird intern often gets the job worm. Morrison first learned about his future employer back in sophomore year while searching BU’s online career information. He met company representatives at a campus career fair that year. They weren’t hiring sophomores for internships then, but what he learned about the company helped when he approached them again the following year. He came away having snared an internship.

Brandon Phan (ENG’16), bound for Bank of America and a software engineer position, interned at the bank last summer. “In the back of my head, I was like, if I do well, I could get an offer,” he says, sparing himself “the full interview process with multiple companies.”

So the May 2016 graduate knew in August 2015 that he was set. “At the end of the internship, before school even started, they extended me a full-time offer for after I graduate.”