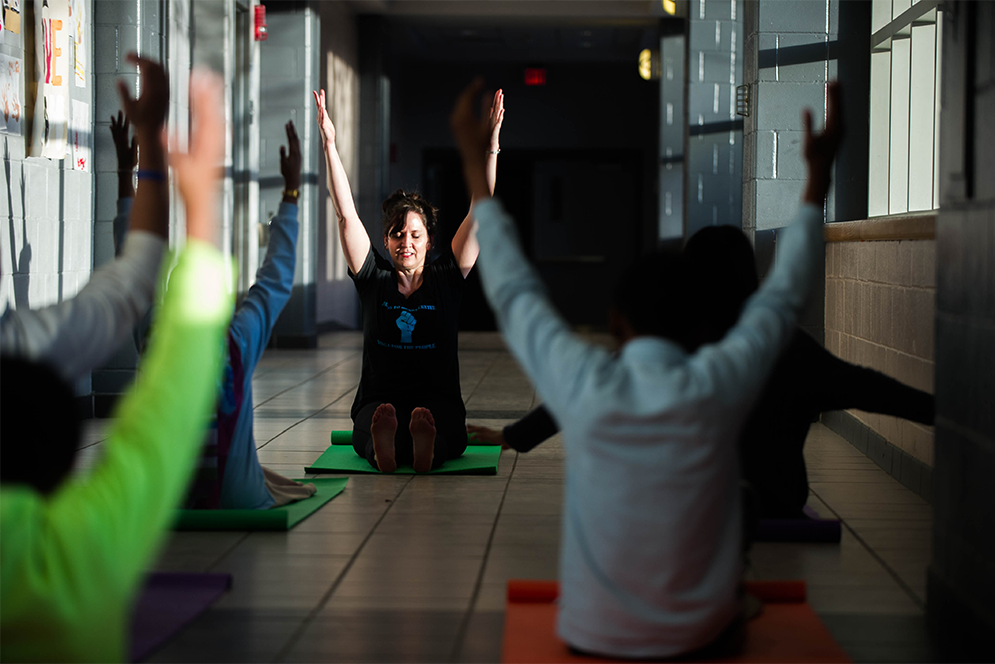 Through Lovett’s (center) Yoga for the People program, instructors from all over Boston have joined her effort to make yoga available to underserved populations.

When Susan Lovett founded the Boston-based nonprofit Hands to Heart Center—Yoga for the People two years ago, she wanted to give those living in poverty or with trauma something that could improve their quality of life, but was likely to be financially and geographically out of reach—yoga. Lovett’s idea has blossomed from a personal labor of love to a thriving nonprofit organization connecting some of greater Boston’s most experienced yoga teachers with volunteer opportunities in low-income, underserved neighborhoods.

For Lovett (SSW’98), a licensed clinical social worker, K-8 teacher, and certified yoga instructor, starting her own nonprofit was the fruit of decades of work serving youth and families in marginalized and underserved communities. She is currently director of ASPIRE, a therapeutic after-school program run by the Alliance for Inclusion and Prevention, Inc., and based at the Lilla G. Frederick Pilot Middle School in Dorchester. The program provides support for sixth, seventh, and eighth graders at risk of developing emotional, academic, or behavioral problems.

A community organizing powerhouse, Lovett, a School of Social Work lecturer on communities and organizing, received SSW’s Hubie Jones Urban Service Award in 2013. She created Hands to Heart after word got around that she was offering informal yoga sessions to students at her middle school. She had already embarked on certification as a yoga instructor.

“I did teacher training at Open Doors Yoga Studios in Weymouth, a 200-hour program that required practice teaching, so I started doing yoga with some of my students,” Lovett says. “The students were so interested that I started an after-school program for low-income students,” which comprises most of the Frederick Middle School students. The program was a hit, and from word of mouth, she was soon getting requests from teachers, fellow social workers, and social service agencies in the community.

Since 2014, Lovett and her 100-or-so volunteer instructors have provided more than 500 free yoga courses at over 35 locations, among them the Frederick School, the Grove Hall Community Center, the Roxbury Y, and Boston branch libraries. The classes have included Curvy Yoga for Women, Kids Yoga, Family Yoga, Yoga as Trauma Support, Adult Yoga, Yoga for Seniors, Yoga en Espanol, and Yoga for Students with Special Needs.

“Because I do community organizing and collaborate with other organizations and represent the school at a lot of meetings, I had lots of resources,” says Lovett, about her efforts to get the nonprofit launched. Her one worry—that recruiting volunteer yoga instructors would be difficult—evaporated when people began enthusiastically signing on to teach programs in Dorchester, Roxbury, and other underserved communities. “This was the first yoga experience for many of the families,” she says.

She sees her nonprofit as a form of wellness outreach—using yoga as a means to ease anxiety, increase focus, improve sleep, and increase physical balance and strength. She says the classes offer a safe, structured, supervised experience that beckons not just to her middle-school kids, but to women in shelters escaping abuse, low-income seniors, mentally challenged adults, and youths in detention centers—all beneficiaries of Hands to Heart.

Those who practice yoga at BU’s Fitness & Recreation Center or in studios in Brookline or the Back Bay might see some marked differences, aside from the population, in the Hand to Heart classes. “Our yoga is accessible and inclusive,” Lovett says. “There’s no chanting, no Sanskrit. We keep it secular because some still view yoga as having religious connotations. We make it very nonreligious. We don’t bring our hands into the prayer position.”

The volunteers undergo free training sessions, where they learn about trauma-sensitive teaching, and veteran volunteers receive regular training updates. Lovett says she makes sure that the instructors are cared for as well. “We have free restorative yoga for our volunteers so they can get something back.”

Through some modest fundraising, Hand to Heart has received grants from Kripalu Center for Yoga & Health and Lululemon, a popular maker of yoga clothes. Now Lovett has kicked off a project called Yoga Love, asking Boston yoga studios to host fund-raising events for Hands to Heart.

“Those studios aren’t servicing people in poverty,” she says. “And this effort promotes the idea of yoga for all people.”

What’s next? Lovett says she’s had a request for yoga taught in Mandarin. If anyone can make it happen, she can.