Psst—all you liberals. Stephen Prothero has a secret to tell you: you’re winning.

With the Tea Party controlling the US House and Donald Trump and Ted Cruz leading in the Republican presidential race, Prothero’s message may sound nuts. Yet the College of Arts & Sciences professor of religion plumbs history to prove it in his latest book, Why Liberals Win the Culture Wars (Even When They Lose Elections).

The best-selling author of such books as Religious Literacy: What Every American Needs to Know—and Doesn’t and God Is Not One: The Eight Rival Religions That Run the World—and Why Their Differences Matter, Prothero summarized his new volume’s argument in a January 29 Washington Post column. The column ran just a few days before President Obama, speaking at a Baltimore mosque, mentioned a point Prothero made in the Post and in the book: Thomas Jefferson, not Obama, was the first president opponents accused of being a closet Muslim.

BU Today interviewed Prothero, who will read from Why Liberals Win the Culture Wars and sign copies tonight at Barnes & Noble at BU, about the state of our culture wars and his new book.

BU Today: What do the “conservative” and “liberal” sides in the culture wars stand for?

Prothero: This is a hard one, because these two terms not only mean different things to different people, but they shape-shift over time. It was once conservative to favor the Equal Rights Amendment, Romneycare, and Common Core education standards. Now all of those things are anathema to conservatives. As I see it, conservatism is not about states’ rights or limited government or free markets, because conservatives have been on both sides of those issues. At the heart of conservatism is this conviction: a form of culture is passing away, and it is worth fighting to revive and restore it. So it is conservative, in my view, to lament the loss of Protestant consensus or the hometown or the traditional family or the good old 1950s. It is also conservative to attempt to exclude from the American family those who are responsible for this loss.

Liberalism, by contrast, is characterized by an eagerness to embrace new forms of culture and a determination to include more and more groups in the public life of the nation. To draw on physics for a metaphor, cultural liberalism is centrifugal, forever spinning off new forms of culture and glorying in them along the way. Cultural conservatism is centripetal. It posits a shared cultural center and then carefully enforces its boundaries. In this sense, Trump’s famed “wall” to keep Mexican immigrants out of the United States is a perfect metaphor for cultural conservatism.

Can you briefly enumerate the liberal victories you cover in the book?

The book tells the story of five culture wars: anti-Jeffersonism in the election of 1800, anti-Catholicism in the early 19th century, anti-Mormonism before and after the Civil War, Prohibition in the 1920s and 1930s, and the contemporary culture wars, from abortion to gay marriage and beyond.

In each of these cases, liberals won. We decided in the election of 1800 that you did not have to be a Christian to be president. We decided that Catholics and Mormons could be our friends and fellow citizens. Prohibition was repealed, of course, but we decided in that debate to embrace not only drink, but also the multiculturalism and multireligiosity that modernity was bringing to our doorstep. In the contemporary culture wars, conservatives lost on almost every front. They lost on abortion in Roe v. Wade. They failed to restore prayer to the public schools. They failed to kill the National Endowment for the Arts. And they lost, most recently and rapidly, on same-sex marriage. 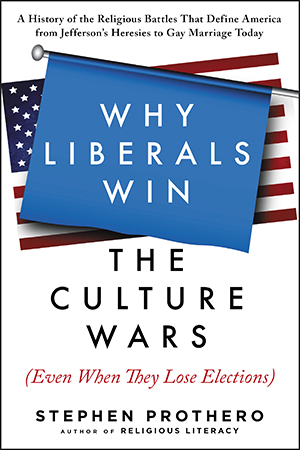 It could be said that conservatives won some of these: Catholics accepted only after they acceded to church-state separation, Mormons after they repudiated polygamy.

The culture wars cycle I describe in the book begins with a conservative attack, followed by a liberal counterattack. The next step is negotiation and compromise. We typically think of culture wars as battles over nonnegotiables: absolute morality or biblical truth. But typically, some sort of horse trading is involved as these cultural battles move toward resolution. I suppose you can read the Catholics’ willingness to get on board with church-state separation or the Mormons’ willingness to jettison polygamy as conservative victories. I view them, however, as accommodations in a larger narrative in which Americans come to accept Catholics and Mormons as their neighbors and friends.

It’s partly because the Bill of Rights is on their side. And demographics also plays a part. It just doesn’t make sense to hate Catholics when they make up a quarter of the population, as they do today. But the main reason liberals typically win is that conservatives push for lost causes. They do so, I believe, because lost causes do such a great job of conjuring up feelings of fear and anxiety over a world falling apart. If your story is that the country is going to hell, then losing on abortion or gay marriage only reinforces that story, no?

Isn’t it ironic that you attribute liberal victories in part to having the “force of American traditions on their side,” since conservatives claim to be upholding tradition?

Well, “tradition” is a fluid thing. Truth be told, both sides have tradition on their side. Both can appeal to certain religious or political or constitutional traditions to support their views. But over time, we view our traditions in a more inclusive way. Culture wars are to a great extent about who is and who is not a true American, and over time, those we include in that category of “us” becomes broader (though not without much pain and even bloodshed).

Why do liberals not know they’re winning the culture wars?

Because that viewpoint fits their story. Part of what is going on here is that both sides want to portray themselves as besieged—as victims. One reason I wrote the book was because many of my liberal friends here in Massachusetts tell me they think the country is being taken over by crazy religious people—by a president who prays before deciding to go to war in Afghanistan and Iraq, or an unnamed GOP presidential candidate who finishes third in Iowa, only to thank “an almighty and all-powerful God” for his bronze medal. But the history just doesn’t bear that out. Not that there aren’t lots of religious folks who want to turn their understandings of the Bible into public policy. There are. But those folks almost never win. For all the restrictions conservatives are trying to put on abortion, Roe v. Wade is still the law of the land. So is same-sex marriage.

I’m guessing “culture wars” has a pejorative meaning for many Americans in our polarized politics, but are they a sign of healthy, permissible debate in a democracy?

If I could wave a magic wand, I would probably wish away the culture wars, at least that caustic element of them that has us banishing each other from the family of America, branding each other enemies of the nation and of the divine. But every healthy democracy is going to have debate. And in a republic like ours, where so many are deeply religious in different ways, we have to expect that our disagreements are going to get heated. I do wish, however, that we took as our models Washington (who warned against the “mischiefs of the spirit of party”) and Lincoln (who in the midst of the Civil War referred to Southerners as “friends,” not as “enemies”) rather than Rush Limbaugh and Bill Maher.

Stephen Prothero will read from, and sign copies of, his book Why Liberals Win the Culture Wars (Even When They Lose Elections) tonight, Tuesday, February 9, at 7 p.m., at Barnes & Noble @ BU, 660 Beacon St., Boston.

Stephen Prothero’s Gift of Hope to Liberals
5
share this