In the video above, CFA’s Mark Stanley discusses his philosophy of lighting design and his work as New York City Ballet’s resident lighting designer.

When Mark Stanley teaches his class in lighting design, he sometimes asks his students to create a mood using a single bare bulb. But in his job as resident lighting designer for the New York City Ballet, Stanley is responsible for figuring out how to marshal the hundreds of lights—some as big as cannons—perched on sidelines, bridges, and balconies to illuminate the stage at Lincoln Center’s five-tiered David H. Koch Theater, where the company performs each season. Whether one bulb or hundreds, the same principles hold, he says.

“I say to the students, if you had to light this with a bare light bulb, what would you do?” says Stanley, a College of Fine Arts associate professor of theater, who is educating the next generation of lighting designers, most of whom will apprentice, as he did, with former teachers. “The point of our curriculum is to expose them to different experiences of light in theater, dance, and opera,” says the MFA design and production programs head. But first comes a basic understanding and appreciation of light’s power and nuance. He recalls his experience as a graduate student at the University of Wisconsin–Madison, where his mentor asked students to stand at the shore of a Wisconsin lake for a day, studying the changing light.

“Light is the most ephemeral of all the design elements,” says Jim Petosa, a CFA professor and director of the School of Theatre. “With the press of a finger—in one second—an entire world can be transformed. It’s a powerful and mysterious medium. Mark understands that and is a patient and rigorous teacher of its artistry.”

“Light is the most ephemeral of all the design elements.”—Jim Petosa

“It is my goal for lighting students that they will develop an understanding of the collaborative process, experience the world around them, discover an individual aesthetic, and communicate through design and visual symbols unique stories to an audience,” says Stanley. “There’s no right or wrong. It’s a time to experiment, and they’re encouraged to explore.” Along with that exploration comes solid hands-on training, and students graduate as professionals in the field: “We have a professional faculty, and we know our graduates are capable of working in the professional world,” he says.

After earning a BA at the College of William and Mary and an MFA in lighting design at Wisconsin, Stanley went to New York City to work with one of his instructors, who was a Broadway designer, for three years. “Faculty all over the country take their students to New York,” he says. Case in point: his current NYC Ballet assistant designer is former student Katy Atwell (CFA’14). He’s also hired CFA alums as drafters and stagehands.

From stage plays to rock concerts to glitzy Las Vegas revues, lighting is an indispensable, if underappreciated element. But in the world of dance, specifically, a world-famous company known for its abstract choreography and minimal stage sets, lighting direction is compelling and crucial. As the late pioneering lighting designer Jean Rosenthal once remarked, “Light is the water that dancers swim in.” Immersed in two worlds—academic and creative—Stanley uses his ballet experience to convey to his students the sense that lighting has a vast lexicon. For the uninitiated, who see light as essentially dim or bright, focused or diffuse, it’s stunning to learn how the medium can drive a narrative, set a place, time, and mood. It can amplify, obliterate, or age who or what’s on stage. 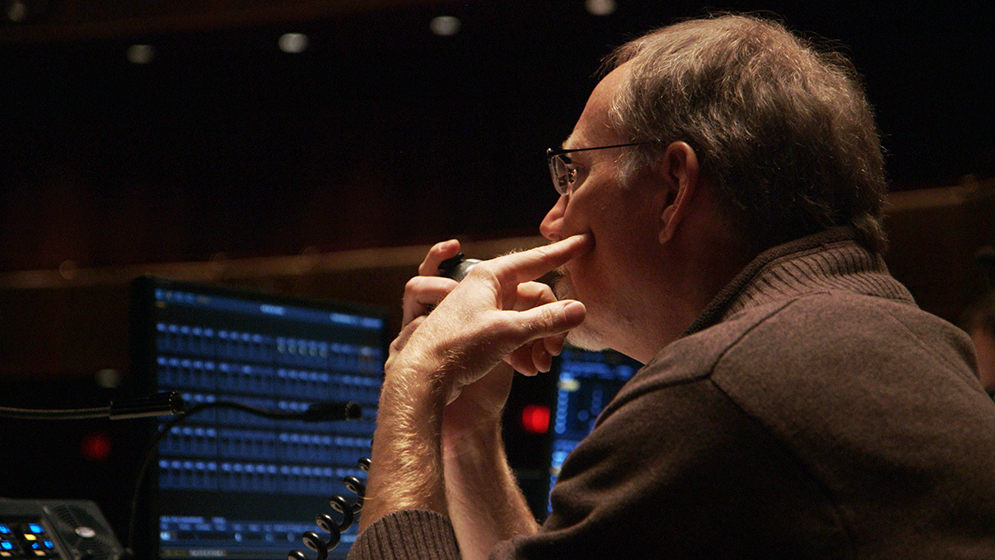 Stanley likes to kick off his CFA lectures with a favorite quote, a line from a song in the Broadway musical A Chorus Line: “Everything is beautiful at the ballet.” But the subtleties of his craft—the ways lighting makes beauty palpable—are often misunderstood, he says. “It’s not just lights on and off; there is a lot of thought that goes into everything.”

This was clear at a recent Lincoln Center rehearsal of a piece by NYC Ballet dancer and prolific choreographer Justin Peck: Stanley was positioned at a table in the empty orchestra seats, working a computer keyboard and giving second-by-second instructions to the lighting team posted at various points on, above, and at the sidelines of the stage and in the control box at the rear of the theater. As the soloists and corps de ballet leaped, pranced, and twirled across the stage, the backdrop took on a succession of pastel hues that carried moods from otherworldly blues to warm, sunny earth tones. Lighting can intensify or mute costumes and it can propel the audience’s eye to points on the stage without resorting to the clunky spotlighting of amateur productions.

An example of a lighting challenge that probably would, and should, go unnoticed by audiences: the flickering candlelight Stanley designed for the company’s recent production of La Sylphide, unusual for its elaborate stage sets. For a cavernous hunting lodge scene, he and the set designer shopped for and inspected flickering bulbs. “I went to the shop that built them, and we made sure that the flickering was of a pace that wasn’t too strong and too rapid, and that I could control all of that,” he explains. But when installed, the flicker of the chandelier bulbs was different from that of the candelabra bulbs.

“We didn’t like that, so we ended up sending the chandelier back to the shop and having it outfitted with the same flicker that was in the candelabras,” he says. The difference in the flickering bulbs may be pedestrian, but the deliberate synchronization reflects the meticulous thought that goes into every production. Nothing is simply “good enough,” he adds.

A BU faculty member since 2004, Stanley regularly commutes from Boston to Manhattan, where he has designed over 200 premieres for the ballet company, works by Peck, Peter Martins, Susan Stroman, Alexei Ratmansky, Benjamin Millepied, William Forsythe, Mauro Bigonzetti, and Ulysses Dove, among others. In addition, he has designed for many choreographers, such as Kevin O’Day, Susan Marshall, and David Gordon, and for numerous ballet companies across the United States and Europe. He was resident lighting designer for the New York City Opera and has designed for plays produced at the Kennedy Center for the Performing Arts, the Huntington Theatre Company, Long Wharf Theater, and many others. Fans of the PBS broadcasts Live from Lincoln Center and Great Performances are likely to have seen his work. He is also the author of The Color of Light Workbook.

Unlike lighting designers for, say, Broadway shows, which run for months or years, Stanley and his crew might light between two and five ballets in the course of an afternoon. For each ballet, he designs a light plot, similar to an architectural blueprint, which designers use to guide the director, other designers, and finally, the technical crew. “Being part of a repertory company, I don’t have the luxury of designing a light plot that fits only that piece,” says Stanley. When you go to a Broadway show or a theater piece anywhere, the light plot is for only that performance.

“Here at the New York City Ballet, this light plot has to accommodate in one season 30 to 40 ballets, and then we have over 200 active ballets in the repertory,” he says. “So it has to accommodate all those, not simultaneously, but at different points in the season and within the rotation of the seasons. I think that the challenging thing is coming up with unique ways of using the light plot to make things different, and doing it in the time frame that we have.” It’s a very collaborative process, and in that short time, he confers with choreographers, costume designers, and stage managers, all of whom are invested in the light plot.

While he is able to enjoy a performance designed by someone else without critiquing the lighting, Stanley says, he is “observing light all the time. Some of my own training was about looking at light in nature,” sitting by that Wisconsin lake and picking “all the different blues that were in the water. So there was a constant reinforcement of the idea that observing not just natural light, but light in all the world around us, informs what we do on stage.”

Stanley says he’s become a better designer because of his students and their often-fresh approaches to the craft. How does he gauge success? “When it’s successful to me is when you’ve created a very unique world—when that dance could not exist in another world because the light is so sympathetic to the movement, to the mood.”

“Light Is to Dance as Water Is to Fish”