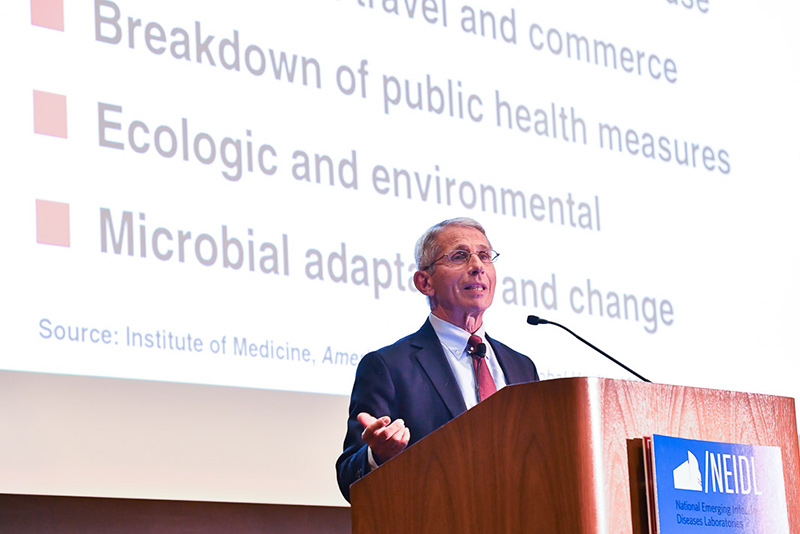 National Institute of Allergy and Infectious Diseases director Anthony Fauci told the NEIDL symposium audience that because there have always been, and always will be, emerging infectious diseases, “we need people and efforts like those that are going on right here, at BU, and at places like the NEIDL.”

Anthony Fauci flashed on the screen a slide of a huge map of the world crisscrossed with blue and red lines showing dozens of emerging and reemerging infectious diseases. Ebola. Yellow fever. MERS. West Nile virus. Dengue. Zika. This was the map the director of the National Institute of Allergy and Infectious Diseases had shown to the appropriations committee of the US House of Representatives in March 2016, he said, addressing the opening of Boston University’s National Emerging Infectious Diseases Laboratories (NEIDL) inaugural symposium, held at BU’s George Sherman Union (GSU) on September 18, 2016.

“I made this slide completely impossible to read, because I want to overwhelm them so they will give me more money,” Fauci said. “For the last few years they haven’t, but that’s another story.”

Later, during a panel discussion with experts and journalists, Fauci pointed out that in February 2016, President Obama asked Congress for $1.9 billion to combat the spread of the Zika virus. “It is now September 18 and we still don’t have it,” he said. “It is completely unconscionable. We could turn that around by having an emergency fund.” He was referring to a global health security fund that has been proposed by health experts and would not be subject to the whims of Congress.

The three-day symposium brought together some 160 virologists and other scientists from all over the world who study the diseases on Fauci’s map—and work on vaccines, treatments, and public health responses—to discuss their research and the particular challenges of working with dangerous pathogens. On the first day, the scientists joined a large crowd of BU faculty and students, funders, journalists, and other members of the public at the GSU.

“This is a milestone event in the history of the NEIDL,” said BU President Robert A. Brown, who joined NEIDL director Ronald B. Corley, a BU School of Medicine professor of microbiology, in welcoming the scientists. “To be relevant, leading research universities must be involved in understanding the pathways of these diseases and finding vaccines and cures and treatments.” As the NEIDL moves toward opening its biosafety level 4 lab, he said, “we are committed to assembling a world-class team of interdisciplinary researchers to work on the most virulent diseases in a state-of-the-art facility with the highest standards of safety.”

While Fauci gave an overview of emerging infectious diseases, From AIDS to Zika, the day’s other keynote speaker, science journalist and author David Quammen, talked about how to communicate effectively with the public about such diseases. Some of Quammen’s pointers:

During the panel discussion, moderated by Adil Najam, dean of the BU Pardee School of Global Studies, Quammen had a question for Fauci: How does the drama of new and emerging infectious diseases affect our ability to deal with existing diseases?

Fauci’s answer: “The bad news is that it can take away attention from a problem that is chronic and ongoing, that is far worse than the very worst peak of the emerging infection.”

He cited the example of malaria. “For centuries and centuries, it’s been killing African babies,” he said. “Every 30 seconds, an African baby dies of malaria. If you look at what happened in West Africa during the Ebola outbreak, more people died of malaria than Ebola. And yet everyone was completely focused on the scariness of Ebola. The Ebola outbreak is now over in West Africa, and they’re still dying of malaria.” A positive way to look at this, he said, is that the dramatic outbreak, and people’s worries about it, could be used as a way to bring attention to the other diseases that are killing a lot of people.

To have a major impact on the public and bring broad attention to emerging infectious diseases, Church said, Hollywood has to be involved. “You have to have movies like Contagion and Outbreak.”

“Some of those movies have been very unhelpful,” Aizenman said.

Columbia University immunologist Ian Lipkin, the highly praised scientific advisor for Contagion, happened to be in the audience and was waiting at one of the microphones to ask a question. “We did the best we could,” he said. “You have to keep butts in seats.”

Lipkin suggested that scientists could have a broader impact by getting out of their media comfort zone and talking to conservative talk show hosts like Bill O’Reilly (COM’75).

“National Geographic is democratic,” said Quammen, a longtime contributing writer for the magazine. “It’s in every dentist’s office in America.

“We should be speaking not just to people who agree with us, even if we have to wrap it in sugar, and embed it in entertainment.”