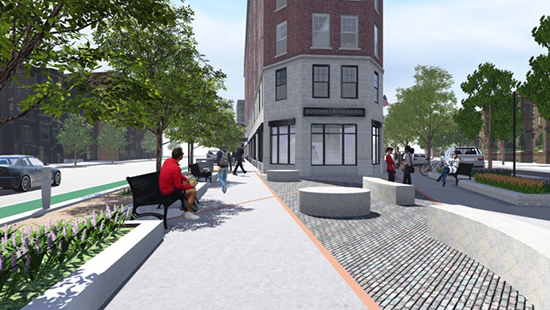 BU has proposed a redesigned exterior of Myles Standish Hall and Annex and is awaiting city approval.

Myles Standish Hall and Annex, the oldest dormitory in BU’s inventory and the storied gateway to East Campus, will get a two-year, $130 million renovation, inside and out, beginning after Commencement in May.

No student will be homeless during the stem-to-stern rehab, and parts of the residence will be inhabited throughout the construction. Meanwhile, the University intends to lease a new apartment building with 180 studio units, nearing completion across campus at 1047 Commonwealth Ave. The plan calls for housing the students displaced by the Myles work there, says Marc Robillard, executive director of housing and dining at Auxiliary Services.

Planning for the work is proceeding while the University awaits various city approvals, including permission from the Boston Redevelopment Authority, which must OK an amendment to BU’s master plan enabling the lease of 1047 Comm Ave for students. The approvals are expected sometime in the winter and spring.

Myles and its Annex currently have 753 beds. During the coming (2016–2017) academic year, 405 students will remain there and the following year 362 will live there, Robillard says. Which students stay and which move will be determined by students’ choices and if necessary, the regular University room selection lottery. Those who remain at Myles during the 2016–2017 academic year will receive a 50 percent discount on the regular room rate; the following year, students in the newly renovated Myles rooms will get a 20 percent discount, while students in the Annex—where renovations will still be in progress—will receive a 50 percent discount. (Room rates for the coming year will be announced later this semester.)

“That’s really a recognition that this whole area is going to be a construction site,” says Robillard. “It’s going to be a noisy place.” The project is “going to be disruptive, but we’re going to come out with a great product at the end.”

Built in the 1920s, Myles and the Annex will get new windows, stonework along the ninth floor, mortar, metal supports for the brickwork, and some new bricks. “That stonework has deteriorated,” Robillard says. “Over the years, rain gets into the mortar, and it freezes, contracts, freezes, contracts. Then there’s the metalwork that holds the brick the entire length of the building. That gets wet, it gets rusty—when metal rusts…it expands. That moves all the brick.”

It’s “a dangerous situation,” posing the threat of falling stone or brick, he says. “This has to be addressed.”

Inside, the building will be gutted to fix leaks, install air-conditioning and three more elevators, and redesign rooms with more privacy. Robillard says the current room layout typically features double rooms flanked on either side by singles, accessible only through the double room. Those singles’ occupants must intrude on their neighbors’ double room to reach the singles, and to reach the common bathroom area.

The renovated residence is expected to be ready for full, normal occupation for the fall 2018 semester.

Other than minor cosmetic work on the building, “we haven’t touched it since 1949,” the year BU bought it, Robillard says. But “this is an important building for us, for a lot of reasons. Essentially, it’s the entry way into the campus.”

Then there’s its status as BU’s first dorm. “It’s served us really well for a long time,” he says. That longevity has loaded it with lore. Martin Luther King, Jr. (GRS’55, Hon.’59) met his future wife, Coretta, there, according to Robillard, and “Joan Baez lived there her entire Boston University career—about six weeks.”

Louis Lataif (Questrom’61, Hon.’90), Questrom Professor and Dean Emeritus of the Questrom School of Business, operated the Myles elevator as a BU undergraduate in the Eisenhower and Kennedy years. Running for election as a class officer, “he asked everyone who got in the elevator for their vote,” says Robillard. “And he won.”

Myles Standish to Get Major Reconstruction

There are 22 comments on Myles Standish to Get Major Reconstruction