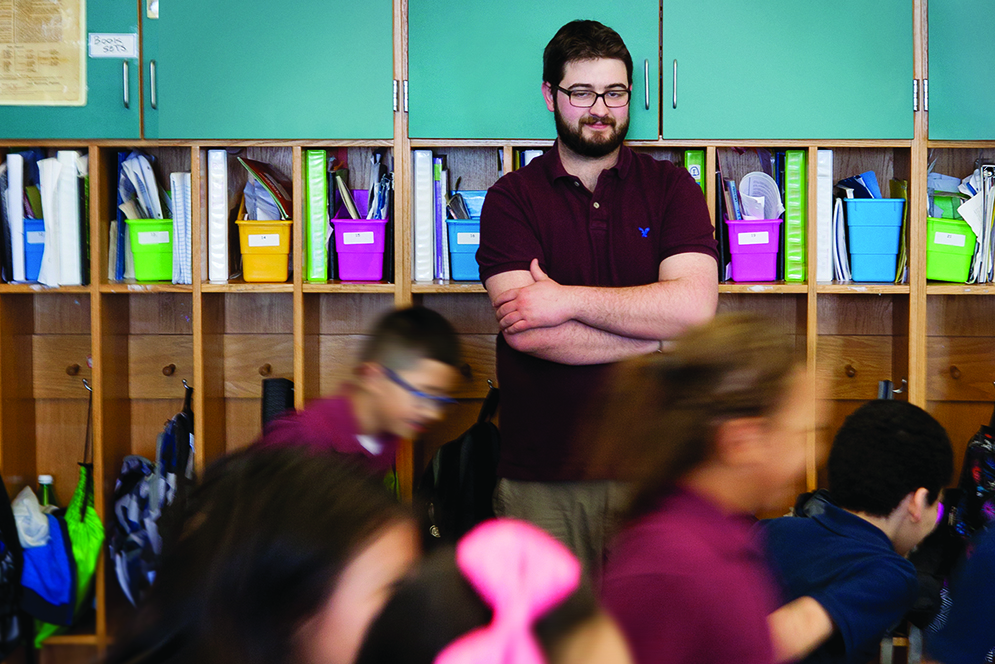 It’s time for a break. You’ve been reading for a while now, so let’s stand up and shake it out. Really. Try it. Ten reps of each of these: march in place, tap your toes on your chair, hop side to side, sit and stand, and squeeze and release your abs.

All done? It probably took one minute. That minute might be all it takes to boost grades in a classroom. Studies show that when schoolchildren are allowed to stand and move, memory, attention, mood, and academic achievement all improve. “Research shows that when we exercise, blood pressure and blood flow increase everywhere in the body, including the brain,” neuroscientist Justin Rhodes explained in a 2013 Scientific American column. “More blood means more energy and oxygen, which makes our brain perform better.”

Yet many children—adults, too—spend most of the day sitting down. The Physical Activity Guidelines for Americans recommends kids and teens get at least 60 minutes of physical activity every day. But that goal isn’t being met. According to the Centers for Disease Control and Prevention, for example, less than 37 percent of high school boys and 18 percent of high school girls meet the guidelines.

Although physical education is mandated in the vast majority of states, a study published in the Journal of School Health in 2007 (the most recent figures available) found that only 3.8 percent of elementary schools, 7.9 percent of middle schools, and 2.1 percent of high schools “provided daily physical education or its equivalent for the entire school year for students in all grades in the school.”

Sarah Benes, senior lecturer and coordinator of physical and health education programs at Boston University’s School of Education (SED), says things are getting better, but too slowly. She offers classes to budding teachers on incorporating physical activity into academics, and vice versa. Every year, she hopes her freshmen—just out of school themselves—won’t find her ideas so new. “People aren’t trained, in general, to think of movement as part of the school day,” she says. “Clearly, what we’re doing here is different, and it’s not the way that students experienced school.”

Benes (SED’06, ’10, SPH’16) is taking a two-pronged approach to getting children moving: teaching brain breaks (ways to get the blood flowing during class time) and advocating for more—and more meaningful—physical education classes.

It’s easy to understand why kids get stuck in their chairs for hours at a time: in many districts, there’s less money for physical education.

In his fourth grade inclusion class at the Kelly School in Chelsea, Mass., Dore (CGS’11, SED’13) gets his students out of their seats every 90 minutes or so. Although he learned the benefits of movement at SED, Dore says daily activity is part of the school’s culture. The first chance to move comes when he calls a brain break. The class stops for 5 to 10 minutes to let off some steam. “Sometimes we do group stretching or shaking it out,” he says. Other times they play games—there’s even the occasional rock-paper-scissors tournament. “Any time a student has the opportunity to reset, take a break, or just shake it out a little bit and get their mind back where it needs to be, I think it benefits everyone.”

“Our brains can only handle so much input at a time,” says Benes. Some therapists suggest a rough starting point for figuring out a child’s attention span is to use their age: five minutes for a five-year-old, six minutes for a six-year-old. The brain break is a chance to hit the reset button—and increase blood flow.

Benes teaches a course at SED on the basic principles of physical education. There, she advocates for the breaks, which don’t need to be educational—“just have them moving, get them sweating”—and also shows how to incorporate movement into lessons to aid “implicit learning.” That means connecting facts with specific actions: if you’re teaching the Constitution, for instance, have students cross their arms when you get to the Second Amendment.

“The idea is that if you give your students bodily cues to remember information, it acts like an additional anchor in their brain.”

Benes’ push for brain breaks and implicit learning is largely happening at the elementary level. Still, there’s no reason they wouldn’t work for teens, too. “I use brain breaks with my college students and they love it,” she says, “so you can’t tell me it wouldn’t work in middle school.” In her class, she leads a variety of activities, from jumping jacks to laps of the hallway to passing a balloon.

The biggest barrier to implementation, Benes says, might not be empty coffers, timid administrators, or intransigent legislators, but teachers. In a recent study, Benes found that most classroom teachers know the benefits of movement but aren’t using it in class. She suspects the fear of disruption might be a big factor.

Dore doesn’t allow his brain breaks to disrupt his class. His approach to getting butts back in seats is the same as for any other classroom activity. “The students need to know what’s about to happen and how it’s going to work; if there aren’t guidelines, expectations, and procedures in place, it’s going to be hard to have a successful time.” The breaks, Dore adds, have just become part of the day—his students even see them as a reward for a morning of hard work.

At Ward Elementary School in Newton, Mass., Lizzie Pike (SED’14) avoids the potential for disruption in her fifth grade classroom altogether by incorporating movement throughout the day, from active morning greetings to switching partners for different class projects. 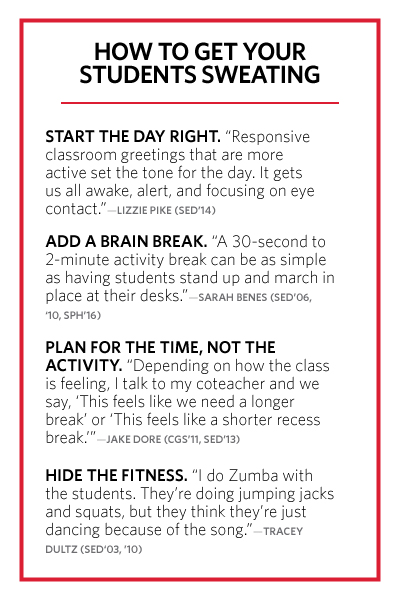 As great as brain breaks might be, they’re not enough to get a child up to the recommended 60 minutes of daily physical activity. Benes advocates for regularly scheduled physical education classes, pointing out that children “spend the majority of their life in school—at the ages in which it is critical for students to be moving.” During that time, they surge through physical growth milestones and develop fundamental motor skills—both too important for schools to ignore, she says. Not everyone might see the value in knowing how to throw a ball correctly, for instance, but those who learn to exercise properly are more likely to be active adults.

“There are actually ways you’re supposed to teach people how to move, and there’s a lot to know. It’s a specific skill set,” says Benes, who points to studies showing that kids with sharpened motor skills also have superior communication skills. “If you’re not good at math in school, you’re less likely to become a mathematician. It’s the same idea [with exercise].”

“There’s no dodgeball, there’s no picking out the weak kid,” says Tracey Dultz, a physical education teacher at the Hennigan Elementary School in Boston. Dultz (SED’03, ’10) previously worked for the city, helping schools that had dropped physical education—or never had it—to build new programs. “Physical education has changed so much,” she says. “The focus is on individual learning: there’s more daily exercise, teaching students how to exercise indoors without equipment. It’s less team sports.”

Benes also wants her charges to be better advocates for their programs. “We’re not doing a good enough job of showing administrators why physical education matters,” she says. Educators with “programs that have been successful are the ones that go to the school committee every year and say, ‘Here’s what we do.’”

While brain breaks might just be about sweating, physical education doesn’t have to be. At the Hennigan, Dultz and Benes teamed up for an intervention that incorporated education into exercise. For two weeks, they turned nonfiction texts into races.

“We would read passages or they would read a sentence and have to do a relay race to pick up a word and put it where it belonged in the sentence,” says Dultz. “We did a pre- and post-assessment and found that the students learned more about that topic by being able to act it out.” They’ve since formalized the project into a research study, which began in spring 2015.

Having toured many schools that had dropped physical education, Dultz understands the pressures that can lead to movement and activity being sidelined, so she tries to make things easier for her classroom-based colleagues. Every Monday, she sends out an email with ideas from Just-a-Minute, a program that provides schools with ready-made activities for free (visit Health-E-tips—it’s where we got the exercises at the beginning of this article).

“It’s not going to interrupt your learning,” says Dultz. “It’s literally just a minute.” You can spare a minute, right? Good. Then before you click away from this page, it’s time to take another break. Everyone up…

A version of this article originally appeared in the Summer 2015 edition of @SED.

There are 4 comments on Moving to Improve