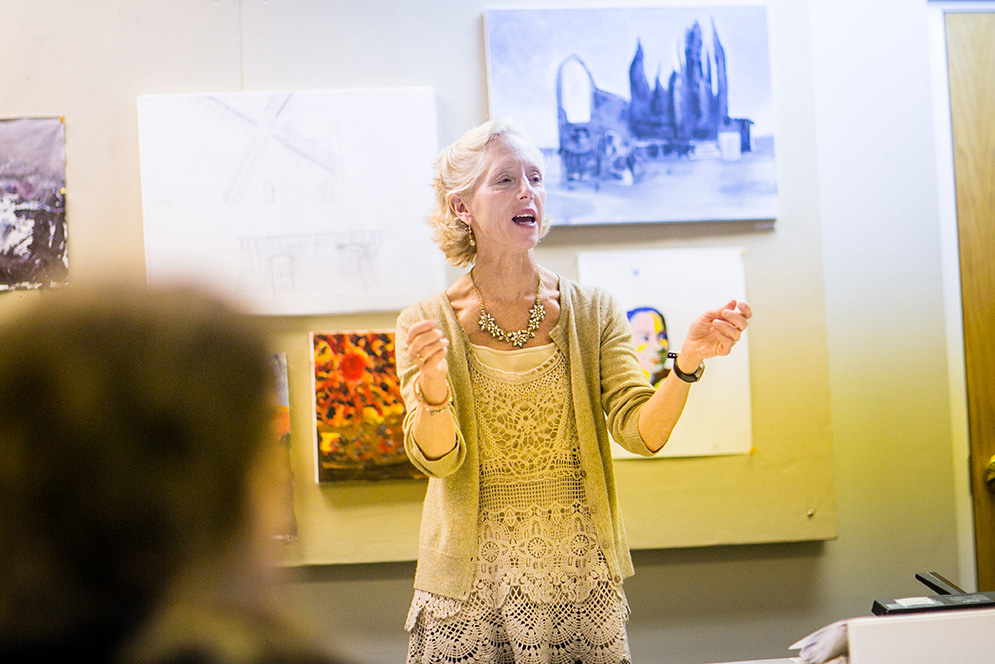 Since Dori Hutchinson established Niteo in 2014, the majority of participants have completed the program, enrolled in college courses, and secured at least part-time jobs. Photo by Dan Aquirre

Abe (not his real name) began hearing voices as a boy. When he started drinking and smoking pot as a teenager, the voices got stronger, and he was briefly hospitalized for psychiatric treatment. Despite ongoing therapy and medication, things fell apart in college. “I was so far off track,” says Abe, who is not a BU student. “I was miserable. I was drinking a lot and having lapses in reality and bad symptoms.” He was eventually suspended by an administration he says failed him, and moved back in with his parents.

Most students who leave college because of mental health problems do not return, says Dori Hutchinson, a Sargent College clinical associate professor of occupational therapy and director of services at BU’s Center for Psychiatric Rehabilitation (CPR). Many become socially isolated or marginalized, and a job, career, and fulfillment may seem out of reach. They may end up on disability. To help students before they slip that far, Hutchinson and her colleagues at CPR started the Niteo program in 2014. (Niteo is a Latin word meaning “to thrive.”) Funded by a $175,000 grant from the Sidney R. Baer, Jr. Foundation, the program provides recovery services and support to help students with serious psychiatric challenges return to school. It is open to college students who live or attend school in the Boston area. 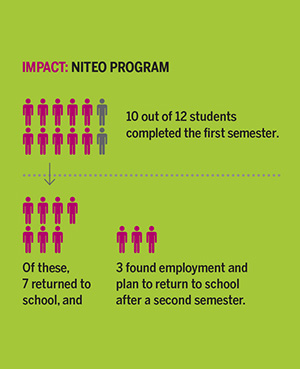 College and mental illness can be a combustible mix. “There are kids who come to school with attention deficit problems or psychiatric and mental health problems like bipolar disorder or a depressive disorder,” says Larry Kohn, CPR director of development. These problems often worsen in college because of substance abuse and other risky behaviors and the stress that comes with having more independence and responsibility. Students who manage their illnesses with the help of doctors, therapists, and medication may still have difficulty meeting the demands of higher education on their own. When Hutchinson (SAR’85,’96), who specializes in psychiatric rehabilitation, spoke at a 2013 meeting of the National Alliance on Mental Illness in Boston, “about 80 parents lined up to tell me the story of their kids, saying, ‘My kid didn’t get any support to stay in school.’”

This is where Niteo comes in. The program “uses education to nurture the idea that people can heal from their experiences with mental health challenges and move forward to live the kind of life they want,” says Hutchinson. “Education gives people a valued role. They’re not patients, consumers, or clients—they’re students. And there’s a foundation of optimism and hopefulness to that.”

The 30-week program is divided into two semesters. During the first, students come to the center on Commonwealth Avenue three times a week for classes in coping skills like mindfulness and stress tolerance, as well as such academic skills as writing and test preparation. The second semester focuses on individual coaching to help them over their personal hurdles, whether it’s a practical task like organizing a schedule or getting to class on time or a more complex one such as overcoming a feeling of stigma. The program can be adjusted to address each student’s needs, says Niteo program coordinator Courtney Joly-Lowdermilk.

Students in the first two cohorts, one that started in fall 2014 and the other in spring 2015, had nearly identical results. A dozen students enrolled each time; 10 in each group completed the classes and 7 have already taken at least one college course. About half also have gotten part-time jobs. The program launched a third cohort this past September. Hutchinson and her colleagues hope to secure funding to keep it going and to share their practices with campuses around the country.

At 23, Abe is a Niteo success story. An inpatient treatment program finally provided a diagnosis to explain his challenges: schizoaffective disorder. His psychiatrist steered him to the center, where he’s known as an enthusiastic participant, working with both a college coach and a writing coach, speaking up in discussions, and even organizing social events for the group. He attends Alcoholics Anonymous meetings, has two jobs, and has been admitted to a new college. “I’m taking a course online there, and I have a 95 average,” he says. “Niteo made it possible, because the last time I went back to college I was like a deer in the headlights.”

This progress, he says, has convinced him “that if I stay sober and treat my symptoms and work hard at this, I can make a difference in my life. I sort of lost hope at one point, and Niteo is one of the things that brought it back.”

A version of this article originally appeared in the fall 2015 edition of Inside Sargent.

Fighting for a Future