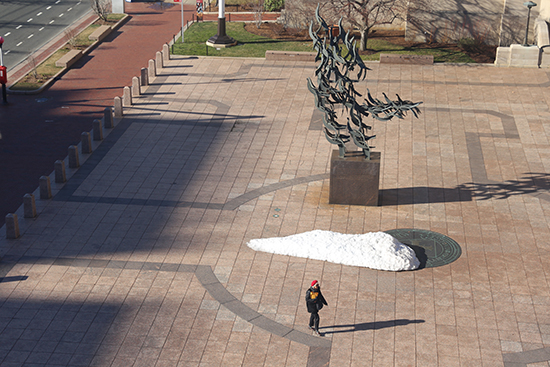 A Community Rally for Peace will be held on Marsh Plaza at 1 p.m. Monday, January 18, followed by a Celebration of the Life and Legacy of Dr. Martin Luther King, Jr. (GRS’55, Hon.’59) at the GSU at 2 p.m. The plaza’s sculpture Free at Last, by Sergio Castillo, honors King. Photo by Alexandra Wimley (COM’17)

Juan Felipe Herrera was named US poet laureate in 2015, the first Mexican-American to hold the post. The son of migrant farm workers, Herrera writes often about ethnic identity and injustice toward minorities. So Kenneth Elmore, dean of students and a fan of the award-winning poet and performance artist, was thrilled when Herrera accepted an invitation to give the keynote address at the University’s annual convocation celebrating the life of Martin Luther King, Jr. (GRS’55, Hon.’59). The event, cosponsored by the Dean of Students office and the Howard Thurman Center for Common Ground, will honor King’s legacy through readings and music by Marsh Chapel’s Inner Strength Gospel Choir. The free event is from 2 to 4 p.m. at the George Sherman Union Metcalf Ballroom, 775 Commonwealth Ave. President Robert A. Brown will introduce Herrera.

Herrera was educated at UCLA and Stanford University, and he earned an MFA at the University of Iowa Writers’ Workshop. His numerous poetry collections include 187 Reasons Mexicanos Can’t Cross the Border: Undocuments 1971–2007 (2007); Half the World in Light (2008), which won the National Book Critics Circle Award; New and Selected Poems (2008); and Border-Crosser with a Lamborghini Dream (1999). Citing Allen Ginsberg as a major influence, Herrera has published more than a dozen collections of poetry, in addition to numerous short stories, young adult novels, and children’s books. To Elmore (SED’87), Herrera, a California-based activist on behalf of indigenous and immigrant communities, is a natural choice to speak about the universality and persistent relevance of King’s message.

“I had a deep smile and understanding the first time I read Herrera’s ‘Rodney King, the Black Christ of Los Angeles and All Our White Sins,’” says Elmore. “He is one of the poets for the age of the cypher. His work—as does much of Monday’s program—reminds me of the global reach of Dr. King’s work and mind-set. Poet Laureate Herrera connects me to celebration and the hard struggles of being human.”

Herrera’s subject matter spans the globe. He has written heartbreaking verse about the persistence of injustice and ethnic conflict. In the poem “Enter the Void,” he writes:

I ride the night, past the Yukon, past
South Laredo, past Odessa, past the Ukraine,
old Jaffa, Haifa and Istanbul, across clouds,
hesitant and porous, listen—

they are porous so we can glide
into them, this underbelly, this underground:
wound-mothers and sobbing fathers, they

leave, in their ribboned flesh, shores lisp
against nothingness, open—toward you,
they dissolve again into my shoes—

King, who was assassinated in 1968, would have turned 87 on January 15. This year’s official federal holiday commemorating his birth is Monday, January 18, but the University’s celebration of his memory will begin, as it does every year, with an interdenominational Sunday service at Marsh Chapel, focusing on King’s legacy of nonviolent resistance, at 11 a.m. on January 17. It will be led by Robert Allan Hill, dean of Marsh Chapel, with a sermon by Christopher Edwards, a Harvard Law School graduate and a litigator in the New Jersey Attorney General’s Office. Edwards is also a member of Marsh Chapel’s advisory committee; his sermon is titled A Radicalized Love.

A Community Rally for Peace at 1 p.m. on Marsh Plaza will precede the 2 p.m. convocation at the GSU. The rally will feature brief remarks from Abigail Gilman, a College of Arts & Sciences associate professor of modern languages and comparative literature; Marvin Venay, an entrepreneur and former deputy director of government affairs in the Massachusetts State Treasurer’s Office and former executive director of the Massachusetts Black & Latino Legislative Caucus; and Ashley Guillaume (CAS’17).

The idea for the peace rally came during a conversation between Elmore and Gilman during a Hannukah celebration in December. Elmore says that in the wake of a semester filled with troubling national and international headlines about race, migration, violence, and anti-Muslim sentiment, “Abigail and I agreed that all of us could use more time and space to come together in solidarity, fight fear, express our hope for peace and justice, and consider how each of us can become active in the great projects that restore our souls, repair our communities, and help us earn the hope we deserve. We wanted to bring that message, which was also Dr. King’s message, out into the open.”

The Marsh Chapel interdenominational service is at 11 a.m. on Sunday, January 17, at Marsh Chapel, 735 Commonwealth Ave. The service will be broadcast live on WBUR and can be downloaded as a podcast from Marsh Chapel’s website.

The Community Rally for Peace starts at 1 p.m. on Monday, January 18, at Marsh Plaza. A Celebration of Martin Luther King, Jr., featuring Juan Felipe Herrera and the Inner Strength Gospel Choir, follows at the GSU Metcalf Ballroom, 775 Commonwealth Ave., from 2 to 4 p.m. All events are free and open to all. For more information, call 617-353-4126.