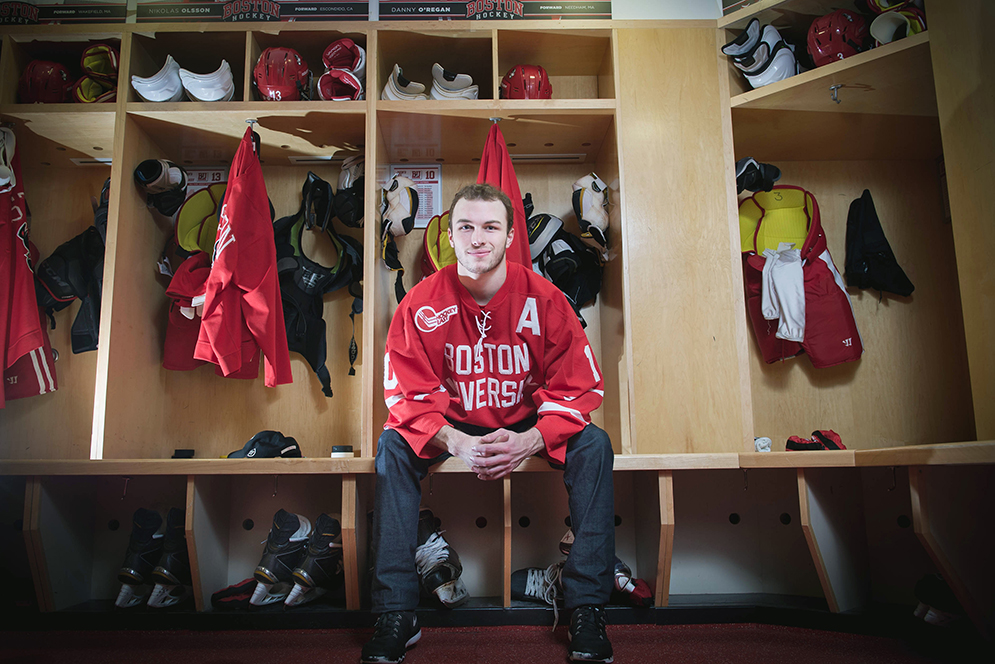 All eyes will be on hockey forward Danny O’Regan (COM’16) during next week’s Beanpot Tournament. O’Regan scored the winning goal against Harvard, 4-3, in double overtime in last year’s Beanpot semifinal. Photo by Jackie Ricciardi

Watching standout ice hockey forward Danny O’Regan move across the ice, it’s easy to imagine that sheer determination and grit account for his success. But teammate Matt Grzelcyk has another theory.

“He’s a big fan of chips,” Grzelcyk (COM’16) says with a laugh. “He thinks he has an addiction to chips and I would have to agree.”

Whether chips account for his prowess on the ice, there’s no disputing that O’Regan (COM’16) has had an extraordinary BU collegiate hockey career. He currently leads the team in points (28) and assists (20). And he enters his fourth and final Beanpot Tournament Monday having scored the winning goal in a double overtime semifinal thriller last year. (The Terriers went on to capture a record 30th Beanpot title, defeating Northeastern 4-3 in overtime for the championship.)

“I couldn’t believe it happened, honestly,” says O’Regan of his game-winning goal. “My linemates made a great play, and I just saw the puck go in. It was the best feeling ever.”

O’Regan was chosen by the San Jose Sharks in the fifth round of the 2012 NHL Entry Draft (138th overall), and he plans to join the team after graduating in May.

“It’s a great organization, and I couldn’t be happier,” he says. “They just kind of let me do my thing and finish school out, but I’ve been there over the summer for a couple of development camps.”

Terrier hockey is in O’Regan’s blood. His father, Tom, wore scarlet and white with the Terriers from 1979 to 1983 and was team captain. Danny was born in Germany halfway through his father’s stint as a member of Berlin’s BSC Preussen hockey team.

“He started skating at around three years old,” recalls Tom O’Regan (Questrom’84). “His brother Tommy is two years older, so whatever his older brother was doing, he wanted to do. He’s always had a real love for the game.”

O’Regan spent his early childhood watching his father play, and he’d find his way onto the ice before his father’s practices and games. Hockey soon ruled his life. “In the summer I’d be playing street hockey every second,” he says, “and when I had to go inside, I’d play mini hockey.”

Once the family moved back to the United States, settling in nearby Needham, Mass., his parents occasionally brought him to games at Agganis Arena. “We took him to certain games and events as a kid, and he always had a kind of special place in his heart for BU,” his dad says.

As a senior at St. Sebastian’s Prep in Needham, where he was a star hockey player, several colleges expressed interest in signing him. He eventually chose to follow in his father’s footsteps. His dad “wasn’t pushing me one way or the other,” he says. “But he’s definitely what I aspired to be, and I think he subconsciously had a big impact on my decision.”

Arriving at BU in 2012, O’Regan began drawing attention immediately. He led the team in points freshman year and was named to the Hockey East All-Rookie Team. He played in all 35 games sophomore year, tying for team lead in goals, with 10, and earning a place on the U.S.A. World Junior Championships U-20 team. And last year he was 13th in the nation in points per game and 16th in goals per game. Teammates attribute much of this season’s success (the 13-7-4 Terriers are currently ranked number nine) to him.

“He has probably one of the best knacks around the net as a teammate that I’ve ever seen,” says Grzelcyk. “He’s one of the most intense guys and wants to win as bad as anyone.”

The assistant captain has been “a model of consistency and one of our top point producers every year,” says David Quinn (CAS’89), now in his third year as hockey head coach. “It’s been fun to watch him grow as a person and as a player. It says a lot that he returned to BU for his senior year even though he had the opportunity to turn pro. We’re very blessed to have a guy like Danny lead us on and off the ice.”

O’Regan’s eight goals so far this season have given him a BU career record of 57 goals. But as well, they have earned him (and his dad) a national record: they are the first father-son duo to each score 50 goals in Division 1 college hockey history.

“We never were a family who looked too hard at the stats,” says his father. “But I’m very happy and proud for him because I know how much he sacrificed along the way to be a player at BU.”

As he prepares for the 64th annual Beanpot Tournament (the Terriers take on Northeastern in the second semifinal Monday night), O’Regan is keenly aware of the stiff competition facing the team. Boston College (16-4-4) is ranked number five, and Harvard (11-4-3) number seven. Unranked Northeastern is currently 9-12-4, but has won 6 straight games heading into the first round matchup.

But as a Beanpot veteran, O’Regan says he’s gained some perspective. “You can’t let the pressure get to you,” he says. “I remember having so many nerves that first game freshman year, just looking around and seeing so many people there. This year, it’s obviously two huge games that will affect our rankings nationally, but also, this is what you dream about—coming to BU to play in the Beanpot.”

The BU men’s ice hockey team hosts Merrimack College at Agganis Arena, 925 Commonwealth Ave., Boston, tonight, Friday, January 29, at 7:30 p.m. Tickets are free for students with a sports pass, $21 for the general public, and $17 for students, faculty, and staff without a sports pass.

The 64th annual Men’s Beanpot Tournament: BU plays Northeastern University in the second game of the semifinal Monday, February 1, at 8 p.m., preceded by the semifinal between Harvard and Boston College at 5 p.m., both at TD Garden, 100 Legends Way, Boston. Purchase tickets on Ticketmaster or Stubhub. Beanpot second round: consolation game is at 4:30 p.m. Monday, February 8; championship game at 7:30 p.m.; both at TD Garden. The games will be televised live on NESN and broadcast live on WTBU Radio (640 AM and 89.3 FM) and on Terrier Sports Radio Network.