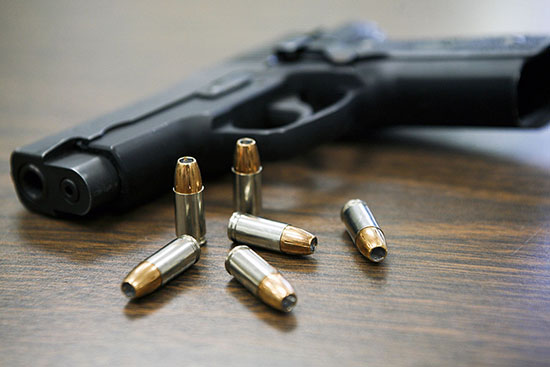 A new BU-led study just published in The Lancet found that three laws already on the books in some states could reduce gun deaths by more than 80 percent if implemented nationally. Photo courtesy of the St. Louis Circuit Attorney’s Office via Wikimedia Commons

More than 90 people are killed by guns every day in the United States. In 2013, there were 33,636 gun deaths in this country. Civilians own approximately 270 million guns, roughly one “for every man, woman, and child,” as President Obama noted in an address to the nation in the wake of the shooting rampage at an Oregon community college last October that left 10 dead.

Now, a nationwide study led by Boston University researchers analyzing the impact of gun-control laws in the United States has found that just 9 of 25 state laws are effective in reducing firearm deaths. The researchers used data from 2010 in their analyses.

The study, published March 10 in The Lancet, suggests that three laws implemented in some states could reduce gun deaths by more than 80 percent if they were adopted nationwide. Laws requiring firearm identification through ballistic imprinting or microstamping were found to reduce the projected mortality risk by 84 percent, ammunition background checks reduced it by 82 percent, and universal background checks for all gun purchases reduced it by 61 percent.

“Very few of the existing state-specific firearms laws are associated with reduced mortality, and this evidence underscores the importance of focusing on relevant and effective firearms legislation,” says study senior author Sandro Galea, dean of the BU School of Public Health. “Implementing universal background checks for the purchase of firearms or ammunition and firearm identification nationally could substantially reduce mortality in the United States.”

Study lead author Bindu Kalesan, a School of Medicine research associate and director of the department of medicine’s Evans Center for Translational Epidemiology and Comparative Effectiveness Research, says the study is the first to assess a broad array of gun laws and other relevant state-level data.

“The findings suggest that very few of the existing state gun-control laws actually reduce gun deaths, highlighting the importance of focusing on relevant and effective gun legislation,” notes Kalesan. “Background checks for all people buying guns and ammunition, including private sales, are the most effective laws we have to reduce the number of gun deaths in the United States.”

The research team constructed a state-level dataset using counts of firearm-related deaths in each state in 2010, information on 25 state laws implemented in 2009, and state-specific characteristics that included gun ownership rates, nonfirearm homicide rates, and unemployment rates. Of the 25 laws, 9 were associated with reductions in mortality, while 9 others—such as the so-called “stand your ground” laws, allowing individuals to use deadly force in self-defense when faced with a perceived threat—were associated with increased mortality; 7 other laws were found to have no correlation with gun-related death rates.

The researchers used a statistical model to determine the independent association of various firearms laws with gun-related homicides, suicides, and overall deaths. They also projected the potential reduction of mortality rates if the three most effective firearms laws were enacted at the federal level.

Laws requiring background checks for both guns and ammunition were the most effective legislation identified in the study, showing the protective effect of state laws that close loopholes in the federal Brady Law, which requires criminal background checks only for guns sold through licensed firearms dealers.

Only seven states had universal background checks in 2010, while just three states had firearm identification laws that require ballistics identification or microstamping of guns that leave markings on the cartridge cases they expel when fired, making it possible to link the cases to particular guns.

The authors noted that their findings corroborated an earlier, smaller state-level study that found local background checks were associated with a 22 percent lower homicide rate.

The link between state levels of gun ownership and gun deaths has been well established, but less is known about the effectiveness of existing gun laws. The states have introduced a broad range of laws to strengthen or deregulate the Brady Law. However, about 40 percent of all gun sales are estimated to be private transactions (thus not covered by the Brady Law) that do not require background checks.

Study coauthors were from Columbia University and the University of Bern, Switzerland.