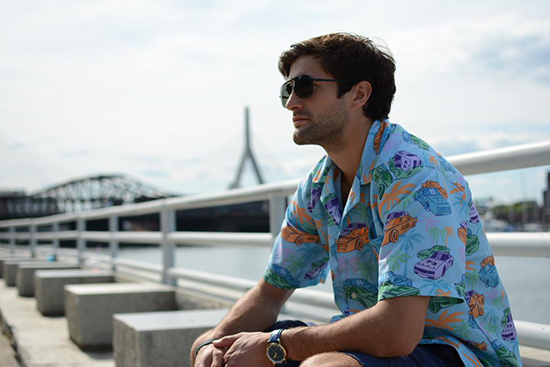 Hawaiian shirts sold by Fielder’s Derby are one way to stand out in a sea of flannel and button-ups. Photo courtesy of Haungs

While flannel may be the shirt-of-choice in Boston this time of year, Kyle Haungs wants you to make room in your closet for something a bit splashier—a Hawaiian shirt.

As a cofounder of the online Hawaiian shirt boutique Fielder’s Derby, Haungs (CAS’10, Questrom’10) has become an unlikely ambassador for a fashion item normally relegated to cruise ships and resorts. He and childhood friends Nick Bailey and Dan Cosgrove launched their business last August and to date have sold about 200 shirts.

“Hawaiian shirts are for relaxed, fun-loving people,” says Haungs, who studied economics and finance at BU. “There are plenty of Hawaiian shirt companies out there, but there’s been a resurrection lately. Our shirts have a more relaxed feel and fit than the other companies’ and the design is more random and fun-loving.”

The original idea came from Bailey, who used to wear Hawaiian shirts when he went out to bars, where he noticed he wasn’t the only one sporting the fashion. He decided to try to make a shirt with unique designs instead of the usual stock images of flamingos and mai tais, and he proposed the business to his two friends. The trio had known each other growing up in Cincinnati and now live together in Beacon Hill. Although the fashion industry was new to them, each had some experience in the business world (by day, Haungs works for a financial software company, Bailey is a financial analyst, and Cosgrove works as a purchasing manager).

The company name comes from a place that’s special to the three of them: Churchill Downs, home of the Kentucky Derby. The Louisville, Ky., racetrack is just an hour and a half from Cincinnati, and they often attended the races. Their favorite place to watch the Derby: the infield—hence the name, Fielder’s Derby.

They began the company just as Hawaiian shirts were undergoing a resurgence. And it appears to be a global trend. Vogue Australia reported on a new Australian brand, and the fashion house Valentino created a couture Hawaiian collection this year. Hawaiian shirts are now carried by such high-end retailers as Neiman Marcus and Saks Fifth Avenue as well. Haungs says consumers are drawn to the shirts because they’re bold and exude a kind of irony.

To Haungs, wearing a Hawaiian shirt is “kind of like meeting someone with a Carolina-blue hybrid Camry—you had never seen that car before, but now that you know this person, you start to see them everywhere.”

To set its shirts apart from its competitors’, Fielder’s Derby shifted away from ubiquitous patterns of flowers and palm trees, opting for more unusual and playful designs like sharks and skis, elephants on surfboards, and banjos and boots.

Before the budding entrepreneurs undertook their venture, they researched how to create a website using Shopify, found a designer who could use Adobe Illustrator to design the shirts, and connected with a manufacturer in China to make them. Price has also been a factor in attracting customers: where a silk Tommy Bahama Hawaiian shirt runs about $120, the Fielder’s Derby version, made from 100 percent peachskin polyester, costs just $50.

“Starting our own business has definitely been rewarding,” Haungs says. “Granted, we each have our own career, so it’s not our sole focus; we have other jobs as a safeguard. Since we aren’t struggling entrepreneurs, the ‘safety net’ has made it more fun and relaxed. We can go a little slower than if this was just our sole focus, and enjoy it more.”

One thing that’s caught the trio by surprise: the widespread appeal of their shirts. They initially expected their customer base to be 18- to 24-year-old men, but have found that customers around their fathers’ age are buying them as well. They hope to expand the line to include shirts for women and children.

To help promote their product, Haungs, Bailey, and Cosgrove wear the shirts when they go out, to bars, for example, or to the office on casual Fridays. They expect a surge in interest in the coming weeks as people start packing for spring break trips and planning summer vacations.

“The fun part of wearing these shirts is having people come up to you and ask where you got them, and then handing them a business card,” Haungs says. “You get a lot of comments when you wear them out.”

Hawaiian Shirts Are Back