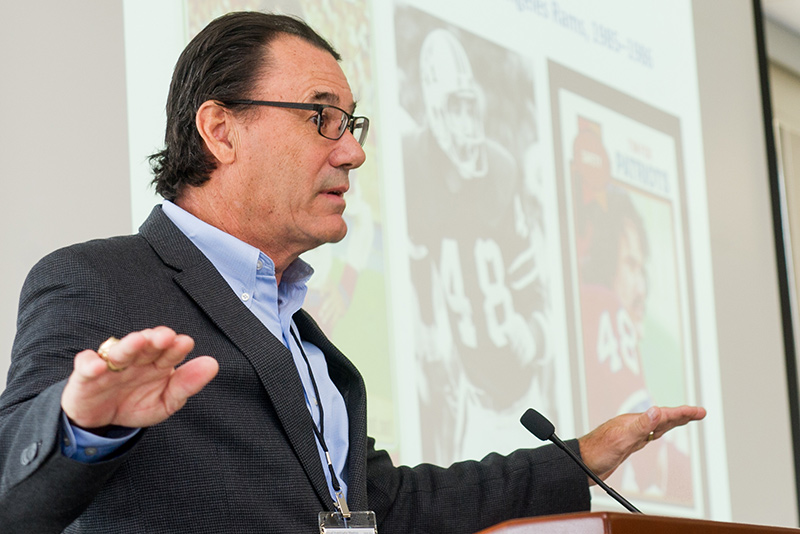 The title of Fox’s talk to the researchers: “My Personal Journey Dealing with the Long Term Consequences of Playing the Game I Love.”

Tim Fox, the 62-year-old former New England Patriots safety, was describing to a room full of brain scientists at the Boston University School of Medicine (MED) the ferocious style of play that he’d been trained in from an early age, one that had led to countless head injuries during his 20-year college and pro career. “We were taught to use your head to tackle,” he said. “It was to be used as a weapon.”

Fox, who also played for the Los Angeles Rams and the San Diego Chargers, recalled two occasions as a Patriot when he was knocked unconscious, revived, and sent back on the field, where he was knocked unconscious again. “The doctor would come over and ask you, ‘What’s your birthday? What’s your phone number?’” he said. “Your buddy would be sitting next to you, he’d whisper in your ear, give you the answer, you give the answer to the doctor, and you’re back in the game.”

Some 50 scientists—from the Boston University School of Medicine (MED) and School of Public Health, the Cleveland Clinic, the Banner Alzheimer’s Institute, the Mayo Clinic, Brigham and Women’s Hospital, and other major institutions around the country—had gathered on the medical campus on June 1, 2016, to launch their landmark, seven-year, $16 million National Institutes of Health (NIH) and National Institute of Neurological Disorders and Stroke (NINDS)–funded study aimed at diagnosing CTE, a degenerative brain disease, during life. CTE, which is associated with repetitive brain trauma and characterized by changes in behavior, mood, and cognition—including the development of dementia—can currently be diagnosed only by postmortem examination of the brain. It has been found in professional football players, boxers, and other athletes with a history of repetitive brain injuries.

“I’d like to do anything in my power to help you folks get to the bottom of this,” Fox told the scientists. He said he has significant cognitive impairments—memory problems, difficulty with organizational tasks, severe mood changes—that he believes are clear symptoms of CTE. He said that he’d gotten lost driving to the meeting on the Medical Campus—“and I’ve lived here for 25 years.” As for his mood, he said, “my irritability factor has gone through the roof.”

The symptoms Fox described have been identified in people who were found, after death, to have had CTE. Does Fox have CTE? “We don’t know,” Stern said. And that, he said, is the point of the study: To develop ways of diagnosing CTE during life as well as to examine risk factors—repetitive hits to the head and genetics, among other things.

“We have to figure out why some people get this disease and some don’t,” Stern said.

He and his colleagues will study 240 people: 120 former NFL players (with and without CTE symptoms), 60 former college football players (with and without CTE symptoms), and 60 control subjects who have never played contact sports or experienced any type of brain trauma. Researchers will examine the participants at MED and three other centers: the Cleveland Clinic Lou Ruvo Center for Brain Health in Las Vegas, the Mayo Clinic in Scottsdale, Ariz., and the New York University Langone Medical Center in New York City. In addition to extensive clinical examinations, participants will undergo positron emission tomography (PET) imaging, MRI scans, blood work, and other tests with the potential to detect changes in the brain associated with CTE. Data will be shared with researchers worldwide.

Stern is one of four principal investigators on the study. The others are Martha Shenton, director of the Psychiatry Neuroimaging Laboratory and senior scientist at Brigham and Women’s Hospital; Jeffrey Cummings, director of the Cleveland Clinic Lou Ruvo Center for Brain Health; and Eric Reiman, executive director of the Banner Alzheimer’s Institute. Stern and others at the meeting emphasized the sweeping, multidisciplinary, multi-institution, collaborative nature of the research they are about to embark upon together. “We hear about this often as ‘the Stern study,’” Stern told his colleagues. “I can’t stand that, and I’ve been trying to do everything possible to undo that.”

Cummings, who is a physician, talked about the importance of early diagnosis. “How can we inform athletes, soldiers, other people involved in repetitive brain injury, about their future?” he said. However, he added: “This is not just about diagnosis. Eventually, this has to be about prevention and treatment.”

Cummings also sounded a cautionary note. “This is a very newsworthy study,” he said. “As representatives of the study, we all need to make sure we accurately represent what the study is and what it isn’t. This is not epidemiology. This is a convenient sample of people we’re able to recruit for the study. We cannot extrapolate from what we see to the entire population. The scientific process is key. This is about open, transparent interrogation. It’s about asking questions, finding answers, trying to set all our pre-inclinations aside.”

“This is funded by the public in order to help the public,” he added. “We want to protect athletes’ brain health and I believe everyone involved in athletics wants that. There is no advantage in having an athlete who is beaten up and can’t sustain a high level of performance. We want to protect against the effects of head injury wherever it occurs. We’re concerned about soldiers, traffic accidents, domestic abuse. This is a set of lessons that will have wide implications in society.”

Stern noted that the new study will build on the groundbreaking work of MED professor of neurology and pathology Ann McKee, director of the CTE Center and associate director of BU’s Alzheimer’s Disease Center (ADC), who first identified the telltale mark of CTE—tiny tangles of a protein called tau, clustered around blood vessels—in the dissected brain of a boxer who had been diagnosed with Alzheimer’s disease.

McKee, who oversees the ADC Neuropathology Core’s Brain Bank and has studied the brains of more than 200 people found to have CTE, gave the group an overview of her eight years of research into CTE. “We know this is a very biased sample,” she said. “You can’t take anything from these numbers in an absolute sense. But if this were a rare disease, there’s no way we could be this successful at brain collection. I couldn’t just go out and say, ‘I’m going to look at some strange, unusual disease and collect 200 cases in seven years.’ What this says is that this disease is much more common than we thought. Your study is going to show that.”

She showed a montage of the faces of dozens of athletes who have been found to have CTE over the years. “This is a study about people,” she said. “We do this because we are speaking for those people who can’t speak for themselves any longer. We tell their stories because people need to know.”

A Congressional investigation found in May 2016 that top NFL health officials had improperly pressured the NIH to remove Stern, who has been critical of the NFL, from the study. When the NIH refused, the NFL backed out of a signed agreement to pay for the study, according to the investigation by the House Committee on Energy and Commerce. Stern has declined to comment, saying he prefers to focus on the important science.