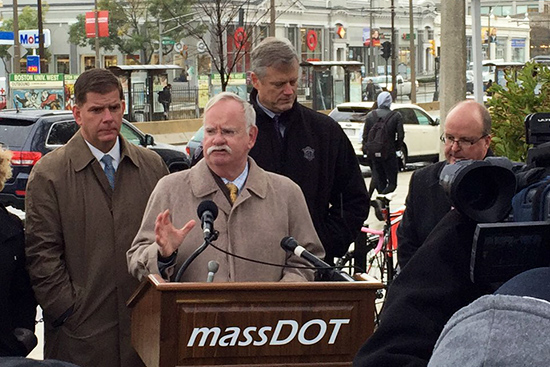 BU President Robert A. Brown broke ground last Friday on Phase II of the Commonwealth Avenue Improvement Project, a $20.4 million state undertaking that will transform the stretch of the avenue from the BU Bridge to Packard’s Corner.

For many at BU, the key improvement will be a safety upgrade for bicyclists, with separate bicycle tracks between parked cars and sidewalks, away from the traffic on one of the busiest stretches of pavement in Boston.

“Boston University is a great institution in the heart of a great city,” Brown says. “We’re pleased to partner with the City and the Commonwealth to make our west campus — the home of over 4,100 students and a growing number of academic programs — more attractive and safer for the thousands of people who pass through it daily. “

In June, MassDOT gave the official green light for the project, which is expected to take three years to complete, finishing in summer 2019. Crews have already begun prepping utility infrastructure that will need to be moved or reconstructed before major work begins in the spring, says Robert Donahue, BU vice president for government and community affairs.

“This is a tremendously important design improvement for the city of Boston,” Baker says, “and a reflection of the commonwealth’s dedication to putting people first and better balancing various modes of transit, including walking, driving, cycling, and public transportation.”

About 35,000 vehicles, 30,000 pedestrians, 27,000 MBTA Green Line T riders, and 3,000 cyclists use this section of Comm Ave daily, according to state authorities. Tinlin says the stretch of roadway has “had an inordinate amount of bicycle crashes,” including one in 2012 that resulted in the death of BU student Christopher Weigl (COM’13). More than 75 percent of the 121 bike accidents that the BU Police Department responded to from 2010 to 2015 occurred on Comm Ave.

“Commonwealth Avenue is full of families and students,” says Walsh. “It’s home to many local businesses. It’s a beautiful roadway that’s steeped in history. It’s one of the gateway boulevards in our city. And unfortunately, we’ve seen far too many crashes, injuries, and deaths in this busy area. It has a crash rate about twice the statewide average. This trend has hit the cycling community particularly hard.”

Innovative components of the new design should help change that. The overhaul will do away with the current bike lanes between parked cars and traffic lanes. The new bike tracks on both sides of Comm Ave will be separated from traffic by a row of parked cars and by three-foot-wide raised buffers between the parked cars and the cyclists, a design similar to that used on some Manhattan streets. After years of debate about how to make Comm Ave safer for cyclists and pedestrians, in 2013 a joint BU-city working group recommended more warning signs, better bike lane markings, and highway reflectors. The city first unveiled the cycle track plan in March 2015.

The project will also bring changes to the Green Line, eliminating the BU West and Pleasant Street/Harry Agganis Way stops and enhancing platform areas for the St. Paul Street and Babcock Street stops. The outbound side of the street, which currently has three lanes, will lose a driving lane, bringing it down to two lanes. The inbound side of the street will keep its current two-lane configuration.

The project will also include water filtration to prevent pollutants from reaching the Charles River, more accessible sidewalks and islands, and new traffic signals that will give transit vehicles preference at stoplights. The cycle tracks will be slightly sloped to prevent the puddling of water.

The University has agreed to chip in $2.4 million to fund Phase II design, upping its contribution from $1.54 million as the design period was extended by the decision to add the cycle tracks and other changes.

With a great many stakeholders, says Donahue, planning was complicated, but the common goal was to make Comm Ave safer. “We needed to meld the transportation needs of drivers, transit users, pedestrians, and bikers into a better and coherent street plan that worked for everyone, and in the end, we succeeded,” he says. “We were gifted to work with many great public officials, from Mayors Tom Menino and Marty Walsh to Congressman Mike Capuano, the town of Brookline, and State Representatives Michael Moran and Kevin Honan. The insistence of the bike community, and especially the members of BU Bikes and the advocacy group Livable Streets Alliance, ensured that the concerns of the biking community were heard.”

The $13 million Phase I of the Commonwealth Avenue Improvement Project, completed in 2010, transformed the streetscape from Kenmore Square to the BU Bridge. The University contributed $3.1 million to that project, which beautified the campus with new trees, shrubs, plantings, lighting, street furniture, raised planters, and sidewalk pavement treatments. Similar amenities will be part of Phase II.

BU officials will be in frequent communication with MassDOT and the MBTA during Phase II, attempting to mitigate impacts on the community and disseminate information about possible disruptions, says Michael Donovan, vice president for real estate and facility services.

Another upgrade coming to the area in summers 2017 and 2018 is the $81.8 million replacement of the Commonwealth Avenue deck over the Mass Turnpike.

There are 9 comments on Comm Ave Remake Kicks Off