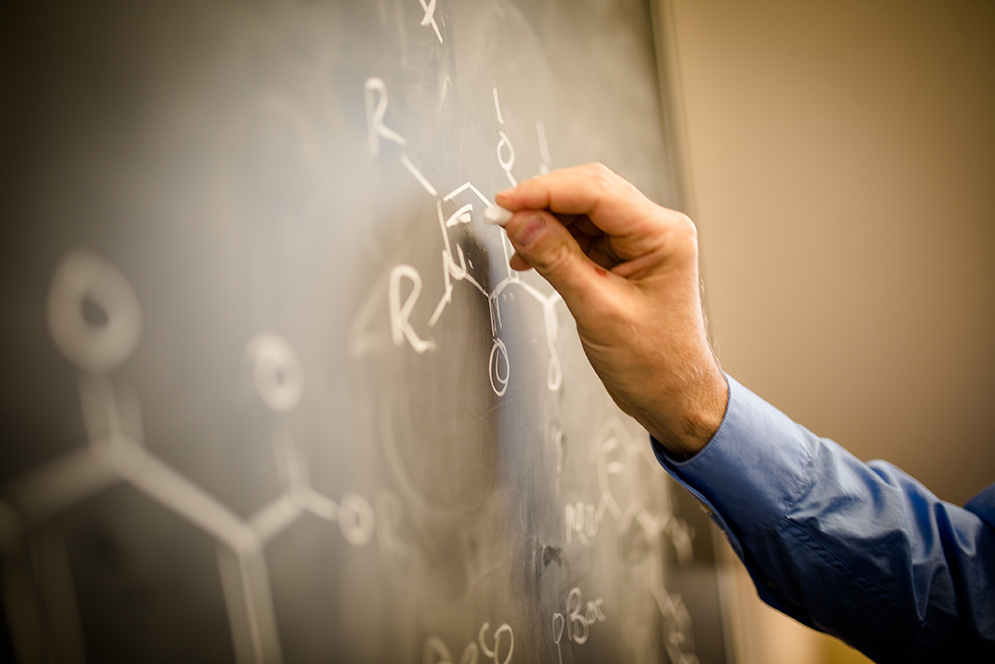 As director of BU’s Center for Molecular Discovery (CMD), John Porco has helped to create some 7,000 new molecules. To a chemist’s eye, their ornate “architecture” makes them beautiful, says Porco, a College of Arts & Sciences professor of chemistry. But to the millions of people with conditions like Alzheimer’s disease, cancer, and infections that don’t respond to existing therapies, these molecules have beauty of a very different kind: they just might be able to treat diseases that today’s drugs can’t cure.

“When you’re running the same reaction dozens or hundreds of times, you want it to work every time, so people generally use very simple reactions, which generally give rise to very simple molecules,” says CMD assistant director Lauren Brown, a CAS research assistant professor of chemistry. “The more complex a molecule is, the more difficult it is to put together.”

With support from a major grant from the National Institutes of Health, Porco and his colleagues spent more than a decade developing what he calls novel chemistries—new ways to synthesize molecules—and learning to manage their growing library, which operated as the Center for Chemical Methodology & Library Development until it was recast as the CMD in 2014. Each new compound was built on a molecular scaffold designed using a process pioneered by Porco and Aaron Beeler, CMD co–principal investigator and a CAS assistant professor of medicinal chemistry. It sounds like the invention of a freewheeling cook: start with chemicals that seem likely to react with each other, then see what happens when they are dropped into different solvents, at different temperatures, and in the presence of different catalysts. Other promising scaffolds were borrowed from the labs of BU chemists specializing in synthetic organic chemistry.

To grow the collection from a handful of bespoke molecules to today’s trove of 7,000, they turned to a technique called combinatorial library synthesis, a mix-and-match approach that yields totally original molecules by experimenting with combinations of molecular building blocks. To illustrate, Porco describes a simple model in which a core chemical scaffold can be modified in five different ways at two sites. Run through all the combinations, and you have 25 new molecules to add to your library. “It’s kind of like a puzzle,” he says.

The CMD’s work is now entering a new phase, as an international network of biomedical researchers begins tapping the library for compounds that could lead to new drug discoveries. More than 40 scientists are already testing samples from the CMD, and together they have identified some 300 molecules as biologically active, meaning that they can interact with living cells and so potentially lead to therapies. “It’s very exciting to see the molecules having efficacy against an important biological target,” says Porco.

The heart of the CMD is on the eighth floor of BU’s Life Science & Engineering Building, where two freezers store the glass vials containing the library’s 3,500 current samples, frozen solid and kept at a constant minus 30 degrees C. Robotic sample handlers dispense tiny drops of compound onto plastic plates that can be sent out to collaborators, who typically test thousands of samples at once. The collaborators get the samples for free, thanks to bridge funding from Boston University that kicked in when the NIH grant expired in 2013.

At St. Jude Children’s Research Hospital in Memphis, Tenn., chemical biologist Kip Guy has screened a collection of some 2,500 CMD compounds in search of new ways to treat pediatric brain tumors. More than 10,000 children are diagnosed with cancer each year in the United States, says Guy, but for decades, the five-year survival rate for many of these cancers has plateaued at or below 60 percent. The key to changing that may be finding therapies that specifically target pediatric cancers, he says.

“Typically, kids are treated with the same drugs as adults, and in many cases this works well,” Guy says. “However, some pediatric cancers are very distinct from adult disease and probably will require novel targeted therapies.”

Guy began tapping the CMD library six years ago. “The compounds from the CMD have unique chemical structures that for the most part have not been previously studied for pediatric oncology,” he says. “There is a strong potential to find molecules that shut down the processes pediatric tumors need to survive, and that may provide starting points for developing targeted therapies.”

Whitesell and his colleagues have identified a CMD rocaglate, dubbed RHT, that’s unusually potent against blood cancers like myeloid leukemia. Whitesell is still not sure why the compound is so powerful, but he thinks it’s because these cancers need a constant supply of certain short-lived proteins to survive. “When production of these proteins is impaired by the rocaglates, even briefly, their levels drop and the cancer cells die,” he says. The team reported on RHT in Science in 2013.

Although compounds like rocaglates occur in nature, harvesting sufficient quantities for analysis is extremely difficult, which is what makes the CMD library so valuable. “Often hits are being a dead end for biologists if there is no way to acquire adequate amounts of the material for further testing,” says Whitesell. The CMD turns that dead end into a new beginning.

In Tres Cantos, Spain, CMD research fellow John Kavouris (CAS’11) is now testing more than 100 new compounds against a dreaded disease called leishmaniasis. The parasitic infection, carried by sand flies, causes disfiguring skin sores; in its most serious form, the parasite migrates to organs like the spleen and liver, where it is deadly if not treated. The World Health Organization estimates that more than a million people will be infected, and as many as 30,000 will die of the disease each year. Among parasitic diseases, only malaria is more deadly.

The vast majority of people with leishmaniasis are very poor, and infections often spread among people displaced from their homes by war and conflict. In Syria, where leishmaniasis is surging, it is called the “Aleppo evil,” and it ravages refugees. But despite this burden of misery, drugmakers have little economic incentive to develop new therapies for leishmaniasis and other orphan diseases (those affecting a small percentage of the population), whose victims are too poor to pay for treatment. Indeed, Brown points out, the first-line treatment against leishmaniasis is the same today as it was in the 1940s, and involves painful injections directly into the skin lesions.

Brown and Porco see fighting neglected diseases as part of the mission of university libraries like the CMD. “Our focus on orphan diseases comes largely from a how-can-I-help mentality,” says Brown. “We certainly lack the manpower of a major pharmaceutical company, so we want to focus on the areas of drug discovery in which we can be the most useful.”

That mentality led CMD co–principal investigator Scott Schaus (CAS’95) to reach out to James McKerrow, a parasitology expert now at UC San Diego, to see if he would be willing to screen CMD compounds against the diseases he studies, including many—like leishmaniasis, African sleeping sickness, and Chagas disease—that are largely neglected by most drugmakers. In 2012, the CMD team got the call they were waiting for: McKerrow had a “hit.” Two CMD compounds were active against the leishmania parasite in cells. More good news arrived eight months later. McKerrow’s team had tested the compounds in mice infected with leishmaniasis and found that they significantly reduced the number of parasites colonizing their organs.

At the BU School of Medicine, the CMD also brings new hope in the fight against Alzheimer’s disease. Carmela Abraham, a MED professor of medicine and biochemistry, who has been studying Alzheimer’s for 35 years, is preparing to screen the CMD’s library for compounds that can stop cells from making amyloid beta, a protein that has been found to build up in the brains of Alzheimer’s patients.

Abraham and her colleagues have discovered a new way to keep amyloid beta in check and are now searching for compounds that can exploit this pathway to provide safe and effective treatments for Alzheimer’s. Once Abraham’s team identifies molecules that are potent against amyloid beta, small enough to enter the brain and that won’t be broken down too quickly by the liver, they will test them in animal models in preparation for clinical trials in humans.

A version of this article originally appeared on BU Research.