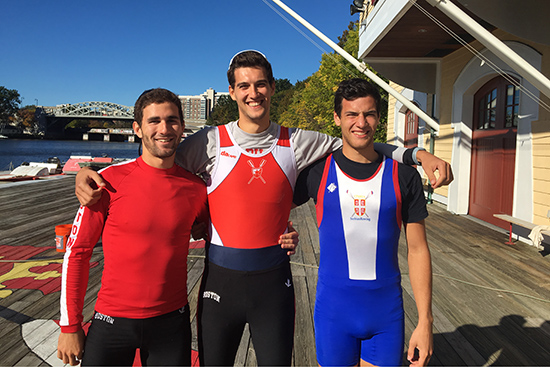 When the BU men’s openweight, women’s openweight, and women’s lightweight rowing teams launch their boats into the Charles River tomorrow for the 52nd Head of the Charles regatta—the world’s largest rowing event—it will have a special resonance for three men’s crew team members.

For Miladinovic, the team-oriented nature of BU’s program is a far cry from the highly competitive, individually focused atmosphere surrounding the sport in his home country. “I feel like the whole idea of rowing switches. Right now, it’s not important how fast you can go. It’s important how fast all eight of you can go,” he says. “You have to hold the other guys accountable as well as yourself.”

All three athletes, who rowed together for a club called Red Star Belgrade in Serbia, say that life in the United States has broadened their view of the world.

“I definitely learned a lot just by coming here and talking to different people. My freshman year, in the first month, I met probably 15 people from 15 different countries. You learn something from everyone,” Marinkovic says. “I became more open toward everything after I got here, because you kind of find out, oh, there’s something else. There are other cultures, other religions, and other opinions.”

As upperclassmen, they take pride in helping newer international students on the team transition to life in Boston. “It’s really important to have somebody that’s going to help you out. I feel that whenever we see somebody that needs help or someone to lead them for the first few months, we talk to them,” Miladinovic says. “It makes the life of the guys that are coming way easier.”

Men’s rowing head coach Thomas Bohrer, a two-time Olympic medalist, says the positive influence the three men have had on the team is noticeable. “They have an incredible amount of honesty and integrity, and I think people see that. They lead in different ways,” he says. “When they talk, people listen to them.”

By way of example, Bohrer is fond of telling a story about Miladinovic’s refusal to throw away uneaten food when the team was cleaning out their bus after a road trip.

“It just resonated. They come from a country that doesn’t really have a lot,” he says, and seeing just a simple thing like taking an extra apple or something like that back to their rooms or giving it to someone that needs it instead of throwing it out is typical of them. “You don’t need a lot in life to be fulfilled, and I think these guys are a really good example of that.”

Bohrer has embraced the global nature of modern collegiate rowing, bringing rowers from places like Ireland, the Netherlands, and South Africa to BU. He says the team’s multicultural makeup has benefited the entire program. “There’s good support. It’s not like, oh, you’re from this country and I’m from this country. There’s no animosity between our international guys and certainly not with our domestic guys. It makes for a nice multicultural family, and they kind of learn from each other.”

Women’s crew head coach Stacey Rippetoe is excited about the opportunity to measure her openweight crews against past performances. The women’s openweight club four finished 5th out of 52 boats in last year’s competition, and the club eight boat took 18th.

“It’s a fall milestone. We always want to compare ourselves to past years,” says Rippetoe. “You always want to get better every year, and we’ve really stepped up our workload this year. The kids have done a great job with it.”

Also competing in the 2016 regatta is the women’s lightweight program, which launched in 2012. “It’s been a great addition to the program,” Rippetoe says. “It’s made all of us stronger. It’s created more opportunities for women’s rowing at BU, which is fantastic.” This year marks the team’s fourth Head of the Charles and the crew is aiming to best last year’s third-place finish in the women’s lightweight eights.

Rippetoe credits the team’s success to women’s lightweight head coach Malcolm Doldron. “I knew he was the right person for that job. He has really high standards,” she says. “He’s extremely intense and he’s able to keep that up over time, which is what you need to do. I think that’s what our lightweights do really well. They bring a very high-level performance to practice every day.”

For lightweight rower Mariah Ippolito (CFA’17), the Head of the Charles is a constant reminder of the strength of the rowing community. “It was amazing to start off my collegiate rowing career at such a competitive race, one that attracts athletes from all over the world,” she says. “Head of the Charles is a special race because it unites the past and present. Our alumni make it a point to attend the event. It’s a nice reminder that collegiate rowing doesn’t end after graduation. The community is always present and active, and it’s something that you’re a part of your whole life.”

As the informal halfway points of the competition, the Anderson Memorial Bridge (also known as the Larz Anderson Bridge) and the John W. Weeks Bridge (Weeks Footbridge) are two popular places to watch the race.

“The rest of the world comes to Boston to do this race,” Bohrer says, so his Terriers can’t wait for their yearly chance to defend what they consider their home course. “Our guys have a lot of pride. More so than any other race, this is a race they want to do well in, mostly because it’s our course.

“There’s just an energy about it, and because our program is in Boston, we have a lot of pride in that.”

Note: Memorial Drive in Cambridge will be closed from the Cambridge Boat Club to Western Avenue from 8 a.m. to 7 p.m. both Saturday and Sunday.

View a live webcast of the regatta here.

BU Prepares for Annual Head of the Charles

BU Prepares for Annual Head of the Charles
1
share this