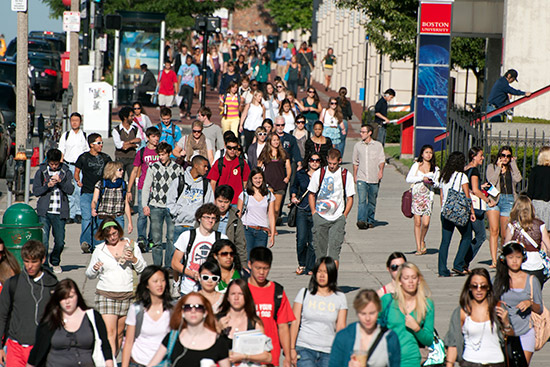 Boston University reached an all-time high in the 2017 U.S. News & World Report Best Colleges rankings, moving up 2 notches to tie for number 39 among national universities and continuing a sustained rise in reputation across the board.

“I am gratified by the recognition of the University’s progress,” says President Robert A. Brown. “A lot of ingredients have gone into the improvements we’ve made as an institution. I especially appreciate the continuing efforts of our faculty and staff, who are leaders in their fields, and who support the achievement of a great undergraduate and graduate student body.”

“Competition from our peer institutions only continues to grow stronger,” says Jean Morrison, University provost and chief academic officer. “So our ability to rise yet another 2 spots to 39 is a reflection both of the outstanding work of our faculty and students and of the rising stature and quality of BU as a truly global research institution.”

U.S. News, which this year rated more than 1,600 four-year colleges and universities, including 310 classified as national universities, considers numerous factors, such as undergraduate graduation and retention rates, outside assessment of excellence, faculty resources, student selectivity, financial resources, and alumni giving. BU earned an overall score of 64 out of 100, up 3 points from last year.

“The higher you get on the list, the harder it is to move up,” says Melanie Madaio-O’Brien, BU assistant vice president for institutional research.

BU earned slightly higher assessment scores from both higher education peers and high school counselors, which together count for 22.5 percent of the total. “Those reputation scores are hard to move,” Madaio-O’Brien says. “That’s a big deal.”

BU has climbed 21 slots since the 2009 rankings, from 60 to 39. She credits the long-term trend to several factors, including investment in faculty under the University’s strategic plan and BU’s admission in 2012 to the Association of American Universities, an elite organization of 62 leading research universities in the United States and Canada.

“We are getting more and more recognition for our research and our faculty, and we are becoming more selective in terms of students,” says Madaio-O’Brien, noting that BU’s student selectivity rank climbed 6 spots, to 49 this year. “We’re also doing really well in graduation rate. It’s four percentage points above what it was projected to be.”

She says much of the University’s progress has been made possible by the success of the four-year-old Campaign for Boston University, which passed its original $1 billion fundraising target this year. Brown has expanded the goal to $1.5 billion by 2019.

In separate U.S. News listings of undergraduate programs, based solely on peer assessments by deans and senior faculty, the Questrom School of Business landed at number 38, up one from last year.

In the graduate school rankings, released in March 2016, the School of Law clocked in at number 20 nationally, a 6-slot jump from last year, and the school’s health law program was ranked second best of its kind, up from fifth. Recent successes at LAW—in addition to the renovated Law Tower and the new Sumner M. Redstone Building—include the Combating Antibiotic-Resistant Bacteria Biopharmaceutical Accelerator (CARB-X) and two new clinics created in partnership with MIT, the Entrepreneurship & Intellectual Property Clinic and the Technology & Cyberlaw Clinic.

Questrom’s full-time MBA program moved up 2 places to a 4-way tie for 41. Kenneth Freeman, the school’s Allen Questrom Professor and Dean, attributed the showing to a curriculum evolving with the business world, creating a “highly relevant degree program, which is attracting exceptional students and resulting in strong career advancements—both crucial factors in this ranking.”

Also in the graduate school rankings, the College of Engineering moved up 2 places to an all-time high of 35, continuing a steady climb from a decade earlier, when it placed 52. ENG’s biomedical engineering department was ranked ninth among all such programs nationally. Kenneth Lutchen, dean of ENG, credits ENG’s advances to strengths that include a commitment to interdisciplinary research, a boost in research and educational partnerships with industry, and the faculty’s prowess at both scholarship and securing funding.

U.S. News ranked the School of Medicine at 29 in the nation for research, up one step from last year and the school’s highest grade ever in that category. The ranking was based in part on the dollar value of grants awarded to schools by the National Institutes of Health. MED also rose to 40 for primary care education, up from 52 the previous year.

The Sargent College of Health & Rehabilitation Sciences occupational therapy master’s and doctoral programs were named best in the country, up from second the last time they were ranked, three years earlier.

“We will work exceptionally hard in the years ahead to set even higher benchmarks for scholarship and research,” says Morrison.

There are 16 comments on University Continues Climb in U.S. News Rankings