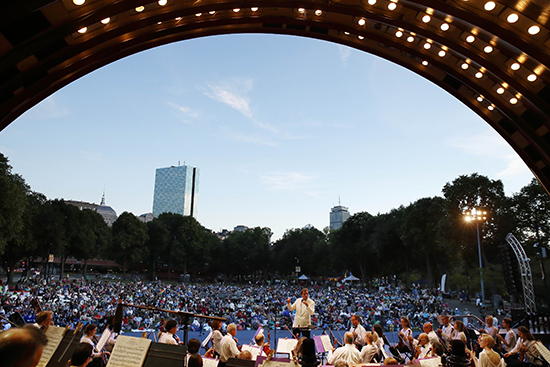 Note: Landmarks Lollapalooza, which was to have taken place tonight, has been moved to tomorrow, Thursday, August 11 at 7 p.m. at the Hatch Shell, due to inclement weather.

Tonight, the banks of the Charles River will be filled with the exuberant strains of George Gershwin’s overture to the musical Strike Up the Band when the Boston Landmarks Orchestra (BLO) presents Landmarks Lollapalooza, an open-air music festival of sundry styles and celebrated classics at the Hatch Shell on Boston’s Esplanade.

Comprising local professional musicians, the nonprofit BLO is known for performing a repertoire both eclectic and inclusive, and its free Wednesday summer concert series at the Hatch Shell draws thousands each week. The orchestra also performs at schools, parks, and community centers throughout Boston’s neighborhoods.

Besides the Gershwin overture, composed in 1927, the orchestra will also play Lollapalooza, a short, vibrant orchestral piece written in 1995 by contemporary American composer and Pulitzer winner John Adams; excerpts from Peer Gynt Suite no. 1, written by Norwegian composer Edvard Grieg in 1867; Tchaikovsky’s Symphony no. 5, one of the Russian composer’s most popular works, completed in 1888; and the world premiere of Venezuelan-born composer and performer Gonzalo Grau’s Elements. Grau, a Grammy-nominated graduate of Berklee College of Music, is a prolific composer, arranger, performer, and producer.

BLO concerts are known for collaborations with other local performing arts groups. Tonight’s will feature East Boston’s ZUMIX, a nonprofit that provides top-quality arts experiences for low-income youth in underserved neighborhoods, performing a new pop-inspired piece. The night will close with Grieg’s “In the Hall of the Mountain King,” with the BLO and the Boston Area Brigade of Activist Musicians (BABAM!).

Upcoming BLO summer concerts: Footloose and Fancy Free, a celebration of American and international dance, on August 17; the annual performance by the Longwood Symphony Orchestra, Boston’s medical community orchestra, on August 24; and a concert performance in music and dance, in collaboration with Commonwealth Shakespeare Company, of Richard Rodgers’ and Lorenz Hart’s classic Broadway musical The Boys from Syracuse (based on Shakespeare’s Comedy of Errors), on August 31. Find more information about these concerts and the BLO’s neighborhood concerts and educational programs here.

The Boston Landmarks Orchestra performs tonight, Wednesday, August 10, and every Wednesday through August 31, at the Hatch Shell at 7 p.m. All concerts are free. In the event of rain, tonight’s concert will be performed tomorrow, Thursday, August 11, at the Hatch Shell, or indoors at the Emmanuel Church, 15 Newbury St., if it rains again. Take any MBTA Green Line trolley to Park Street and transfer to an outbound Red Line train to Charles/MGH.

Free Concert of Classics Tonight at Hatch Shell
0
share this