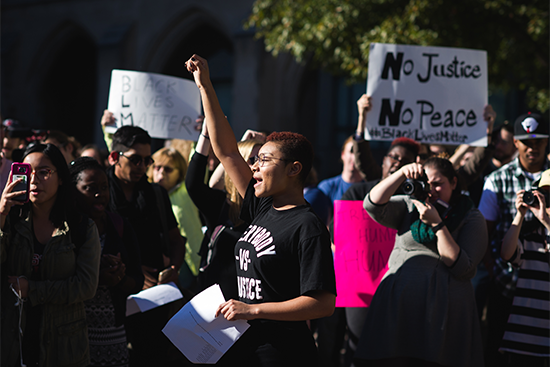 Many in the crowd at Thursday’s walkout carried handmade signs with Black Lives Matter slogans. Photo by Jackie Ricciardi

Hundreds of students, faculty, and staff gathered on Marsh Plaza Thursday afternoon in a show of solidarity with the Black Lives Matter (BLM) movement.

The event, organized by the School of Social Work Student Organization and dubbed a walkout, stemmed from students’ “frustration regarding the persistent, pervasive, and horrific injustices sustained by the black community in the form of extreme police brutality and systemic racism,” said Eunice Kiyoon Kwon (SSW’16, SPH’17), one of the organizers. “We felt that there was a real lack of voice around the issue as a University. We decided on a walkout because we wanted to disrupt the daily routine of the University, publicly demonstrate our solidarity for BLM, and inspire the University to adopt policies and practices that work to end systemic racism within and outside our community.”

BU has reported in the past that about 6 percent of BU undergraduates are African American, and about 7 percent of faculty are underrepresented minorities. “I think the University wants to be an inclusive and diverse environment,” Kwon said, “but what you see in the student body and faculty doesn’t reflect that.”

Unrelated to the walkout, BU announced yesterday that it will appoint an associate provost for faculty diversity and inclusion and equivalent officers in each of BU’s schools and colleges. That was one of five major recommendations of the Task Force on Faculty Diversion and Inclusion, which were fully supported by the University.

The rally attracted a crowd of 200 plus, who listened as nearly a dozen people spoke, punctuated by refrains of “Black lives matter” and “I can’t breathe.”

The Black Lives Matter movement began in July 2013, after an unarmed black teenager, Trayvon Martin, was shot by George Zimmerman, the neighborhood watch coordinator for the gated community in Florida where Martin was living. Martin died from his wounds and Zimmerman was later tried and acquitted of murder.  Subsequent killings of black citizens by police across the country, coupled with a growing recognition of systemic racism in this country, has fueled the Black Lives Matter movement, bringing about successful rallies across the country, including many at universities.

Among the rally’s speakers was Jordan Zepher (STH’17), who told the gathering: “When you get discouraged, remember, remember that we aren’t alone, that we will win.” She went on to read from a poem she had written, “Business as Usual.”

Today is another day intended to be business as usual.
Another black body has been brittled with blasphemous bullets.
The bias judges who have silenced laughter, liberty and life itself with severe and unflinching finality.
I look down at my boots because I cannot look you in the eye.
I know you do not care about Alfred Olango, Terence Crutcher, Crystal Edmonds, and Tyre King.
It is a tragedy, really, your trippy hipster neo-liberalism would not dare deny that
Yet you remain happlessly empowered to debate the humiliating dehumanization of my people as the plushy footnotes of your ivory tower.

Also speaking at the event was Ronald Richardson, a College of Arts & Sciences associate professor of African American studies and of history, who said that many in this country disagree with the Black Lives Matter movement, arguing that “all lives matter.” He agreed that all lives matter, noting that this “has been a principle of the Black Lives Matter movement… All lives should matter.”

Richardson said that many in the crowd were there because they had had experiences with police brutality. His own brother-in-law had been beaten by police years ago, he said, and a former classmate had been killed by police.

Toward the end of the rally, the walkout organizers read a list of demands for University administrators. Among the demands were a call to University officials to publish a formal statement indicating solidarity with the Black Lives Matter movement; to require that all incoming students complete one course or seminar on the principles of racial justice during their first semester at BU; to expand recruitment and retention of faculty, staff, and students from underrepresented groups; and to create a resource page with links to educational opportunities and healing resources connected to the Black Lives Matter movement and racial justice work.

Additionally, the organizers called on BU to immediately appoint a strategic planning task force to work to meet their demands and that its work should begin no later than January 2017, with a goal of coming up with solutions by September 2021.

“I think it’s important that the students organize and are able to collectively come to a space where they can feel that they can do something positive towards progress,” said Kelsey Harris (GRS’20), who attended the rally. “Knowing that people feel the way you feel is really important, especially when you are in college. I think it’s great that they are able to get so many people to come out. Feeling like you are able to do something, that you can protest and can walk out—that’s key.”

This story incorrectly stated that Kwon reported “about 7 percent of faculty are underrepresented minorities.” That number, in fact, came from a BU Today story about a University-wide associate provost for faculty diversity and inclusion.

Liz Vanderau contributed to this story; she can be reached at vanderau@bu.edu.

Rally on Marsh Plaza in Support of Black Lives Matter