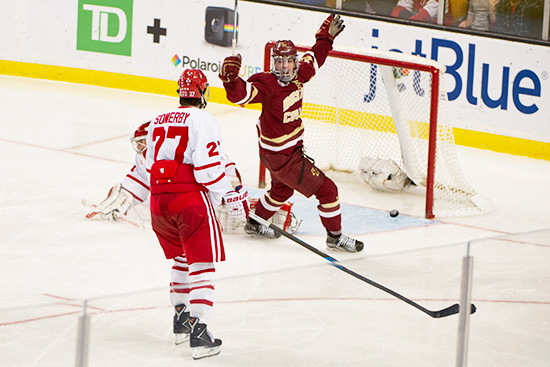 BC’s Zach Sanford after teammate Alex Tuch (not pictured) scored the Eagles overtime game-winner. It was a tough loss for Doyle Somerby (COM’17) and the Terriers. Photo by Andy Costello

For the second consecutive year, the Beanpot championship game was decided in overtime. But unlike last year, when the Terriers captured their 30th Beanpot title by defeating Northeastern 4-3, last night they fell to the Eagles 1-0—the lowest score in the tournament’s 64-year history.

While the game was dominated all night by the play of the goalies, the Eagles found the back of the net on a well-placed wrist shot from Alex Tuch just minutes into overtime, sealing BC’s 20th Beanpot title.

The number-three-ranked Eagles controlled play early in the game, outshooting the number-seven Terriers 12-2 in the first seven minutes. Building off his 24-save performance in last week’s Beanpot opener against Northeastern, goaltender Sean Maguire (CAS’16) continued his stellar play, making a variety of acrobatic saves.

Roughly 11 minutes into the game, a power surge at TD Garden caused many of the arena’s lights to dim, stopping play for 29 minutes and sending both teams back to their dressing rooms. Following the impromptu intermission, the Eagles were penalized twice. The Terriers couldn’t capitalize on a 5-on-3 power play, but managed to stay even thanks to a tremendous pad save by Maguire on a shorthanded breakaway. Stopping another breakaway, defenseman Charlie McAvoy (CGS’17) was penalized for holding with under two minutes left in the first period.

On pace for a 69-save game, Maguire dominated the first period, keeping the game tied. Leading the Hockey East conference in save percentage (.937), BC goaltender Thatcher Demko matched Maguire’s play, highlighted by a beautiful right-to-left pad save—one of the best saves of the tournament.

The Terriers settled down after killing the third power play, stringing together more passes. Maguire, putting on a clinic, made another tremendous save with just under five minutes left in the second period, sprawling on his back while several Eagles tried jamming the puck in around the edge of the crease.

Combining for 52 saves in the first two periods, both goalies looked to be at the top of their game.

Roughly five minutes into the final period, the Eagles had a two-on-one, but overskated the puck, allowing BU to clear. Halfway through the period, a spectacular backcheck by Terrier captain Matt Grzelcyk (COM’16) denied a BC breakaway. Immediately after, the Terriers found Greenway for a BU breakaway, after he barreled into Demko. It was the second time Greenway had tumbled into the BC goalie following a miss.

In the final moments of the third period, Maguire made four consecutive saves to keep the game scoreless at the end of regulation.

Minutes into overtime BC forward Alex Tuch found the back of the net with a shot from the slot, sealing the Eagles’ win in the 64th Beanpot Tournament.

Despite BU’s loss, Maguire earned the Eberly Award, given each year to the goalie with the tournament’s best save percentage. The Most Valuable Player Award also went to Maguire for his season-high 41 saves during last night’s game.

The Terriers haven’t beaten the Eagles since November 17, 2014. Last night was the first time the archrivals went head-to-head in the Beanpot championship game since 2012, when BC bested BU in a 3-2 overtime victory. Either BU or BC has won every Beanpot Tournament since 1994, with the Eagles taking six of the last seven.

Beanpot Championship: BU Falls to BC in OT

Beanpot Championship: BU Falls to BC in OT
0
share this