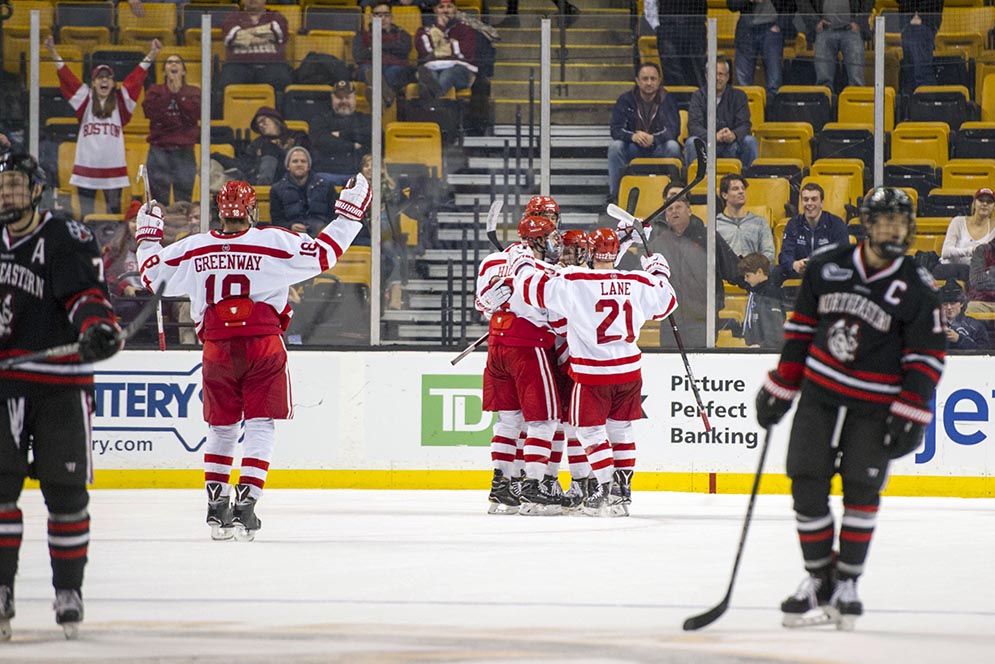 The Terriers celebrate their third point in the final 40 seconds of the Beanpot Tournament first round game at TD Garden Monday night. Photo by Cydney Scott.

The men’s hockey Terriers took an early lead that remained largely unchallenged through three periods of high-speed play in the first round of the 2016 Beanpot Tournament last night at TD Garden, ending in a 3 to 1 victory over Northeastern. After scoring two goals in the second half of the first period, the number-nine-ranked Terriers held their two-point lead until the final minutes of the third period, when the Huskies pulled their goalie, and with six skaters on the ice, scored their first goal. BU came back minutes later, sending the puck into an empty net to seal the win.

The Huskies controlled play early in the game, with forward Mike McMurtry stealing the puck from defenseman Brandon Hickey (CGS’16) in the Terriers’ zone and speeding to a breakaway shot that was stopped by goaltender Sean Maguire (CAS’16).

The Terriers responded with a shot from forward Bobo Carpenter (CGS’17). Blocked by a Northeastern defender, Carpenter backhanded the puck over the shoulder of goaltender Ryan Ruck. Forward Robbie Baillargeon (CAS’17) tapped in the puck with just under seven minutes left in the first period.

Moments later, the Terriers doubled their lead when rookie defender Charlie McAvoy (CGS’17) found the top left corner of the net for just his second goal of the season. Assistant captain Danny O’Regan (COM’16) nearly added another on a breakaway at the end of the first period, but his backhander was denied.

With a two-goal lead, the Terriers continued to press, and helped by two power plays, outshot the Huskies 22-16 in the second period. Ruck and Maguire exchanged beautiful save after beautiful save, including an acrobatic right-to-left glove save by the Northeastern goaltender at the end of the second period, robbing Matt Lane (Questrom’16) of an open net.

Maguire continued his stellar performance in the third period, with three early saves, and he appeared completely unrattled by chants of the notorious song Stacey’s Mom from the vociferous Northeastern crowd.

With under four minutes left in the final period, the desperate Huskies swapped their goalie for an extra attacker and John Stevens took advantage, with a rebound goal at the top of the crease. The BU players maintained their composure, and defenseman Doyle Somerby (COM’17) answered the Huskies with an empty netter—his fifth goal of the season—to secure the 3-1 win for BU.

While the Huskies sailed into this game on an eight-game unbeaten streak, tied for the longest in the nation, the Terriers dominated all three periods, and their victory marks a 33-8 record against Northeastern in the Beanpot, an 18-3 record in the semifinals. Maguire led the way with 24 saves, improving to 8-4-1 on the season.

BU will play crosstown rival Boston College in the Beanpot final next Monday at 7:30 p.m. at TD Garden. The fourth-ranked Eagles won their first round game against seventh-ranked Harvard last night 3-2. The Terriers are 0-1-1 against the Eagles this season, and are winless in their last five Beanpot contests with the Eagles.

After claiming their 30th Beanpot title last year with an overtime win against Northeastern, the BU players are looking for back-to-back Beanpot trophies—BU has taken nearly half of the previous 63 Beanpots. In a year of parity, the four Beanpot teams combined for a 21-4-5 record since the start of the new year. In addition, it was the first time in the 19-year history of the USCHO.com poll that three Beanpot teams were ranked in the top 10 entering the tourney.

The 64th annual Men’s Beanpot Tournament: The BU men’s ice hockey team will play Boston College in the championship game next Monday, February 8, at 7:30 p.m., preceded by the consolation game between Harvard and Northeastern University at 4:30 p.m., both at TD Garden, 100 Legends Way, Boston. Purchase Tickets on Ticketmaster or Stubhub. The games will be televised live on NESN and broadcast live on WTBU Radio (640 AM and 89.3 FM) and on Terrier Sports Radio Network.