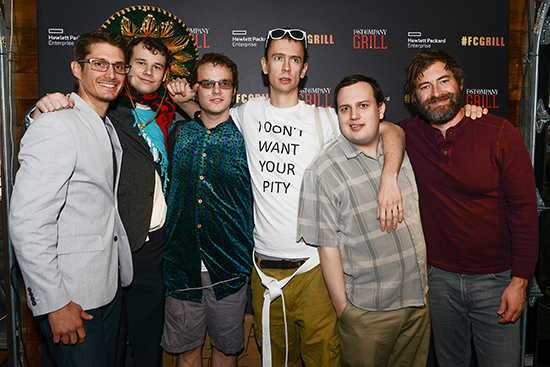 Founded in 2010, comedy troupe Asperger’s Are Us has the distinction of being the first such troupe made up of members with Asperger’s syndrome. Now the four, cofounder Noah Britton (CAS’05), Ethan Finlan, Jack Hanke, and New Michael Ingemi, are the stars of the documentary film Asperger’s Are Us, screening tonight at the Somerville Theatre.

Directed by Alex Lehmann, who directed the Netflix romantic drama Blue Jay, and produced by Mark and Jay Duplass, the film follows the troupe as they prepare for one last show before member Jack Hanke leaves to study in England (they have since reunited). It includes interviews with the performers and their families and explains their sense of humor. Asperger’s Are Us, which premiered at South by Southwest in March, received positive reviews from the New York Times, Esquire, and even across the pond from the Guardian. It is available for purchase or rental on iTunes and will stream on Netflix next month.

“I don’t think we deserve this attention at all, but I think it was inevitable,” says Britton, the group’s unofficial spokesperson. “For our first show, which was for our friends just like everyone’s first show, I sent a one-sentence listing request to the local Salem paper saying that we were the first Asperger’s comedy troupe. Instead they did an article on us and it went viral. More articles came out, and our shows were popular, and I thought, if Alex hadn’t made the documentary someone else would have by now.”

Britton, who teaches psychology at a local Boston-area college, says that “Judd Apatow tweeted at us saying that he liked the movie. Then we wrote back, ‘I hope you learned something about comedy from it.’”

BU Today spoke with Britton about the film and the group’s origins.

BU Today: You met the guys in your group when you were their counselor at summer camp. What made you decide to start a comedy troupe with them?

They were the funniest kids. We would crack each other up, and I would come home really excited. After they got old enough—because I met them when they were 12—and left the program, it was like, ‘Well, let’s keep being funny, but for people who aren’t in our group.’ They were up for it, and it was perfect timing. Six years later, here we are, movie stars.

How did Alex Lehmann find you?

He read an article in USA Today and decided to find us. He messaged us on Facebook, and we met a week later because we were going to start rehearsing for the show that we were doing, and I asked the guys if they wanted to do this documentary. I thought it would be really good for us.

Actually I have had a film crew follow me before. A documentary was made about my band—we were all BU students—The Best Thing Ever. So it didn’t feel weird. There were a couple of moments where the filmmaker would want to talk about what’s happening and I was like, ‘Go away.’

He also followed us when we were on tour this summer and that got a little tough at times, because we were filmed every minute, every day, for six weeks. That’s kind of hard when you can’t get any privacy.

What do you think of the film?

It’s good. We wish it had more of our sketches in it, because the way it’s edited, it looks like we just do arbitrary stuff that doesn’t make sense, which isn’t correct. We have very strong, subtle sketches; it’s just that the director didn’t think they were very funny, so he edited it to make it look like the funny part of the sketch is that Noah is wearing a wig. That was our big complaint. Otherwise, we think he did a great job, and he and Mark Duplass have been really nice, so that’s great.

You were diagnosed with Asperger’s while at BU, is that correct?

I was taking a class called Disabilities in Education and Public Policy. The professor assigned a paper where we were supposed to research gifted children. I looked up giftedness and high IQ and found this article that said that Asperger’s syndrome is a form of autism typically found in people with average to above average IQ. Just reading that one sentence, everything I ever misunderstood in life clicked. Just from that—nothing has ever hit me harder. This is why my mom and I haven’t been getting along, why people think I’m that weird guy. Before you get diagnosed, people are like, ‘Oh, that’s just Noah,’ and when people hear about the diagnosis, they’re like, ‘Oh, that’s the Aspie.’

I forwarded the article to my mom. She read it and didn’t think it fit me. I did more research of course, and sent her more stuff, and then I went to Behavioral Medicine on campus. I talked to a guy and spouted off my symptoms for an hour, and the next week he said, ‘Yup, I think you are correct.’ He noticed my lack of eye contact—I didn’t know I didn’t make eye contact. I have his diagnosis letter hanging on my wall. I started researching autism and joined the Asperger’s LiveJournal community, and I learned so much from the other Aspies there. We learned from each other, and now science is very slowly catching up.

Since you started performing, has your fan base or the questions you get from audience members changed? Are people more educated about Asperger’s?

The only difference as far as our shows is that we are more famous, so we have more people. From the beginning in 2010, we would get people asking questions like, ‘What do you recommend for autism?’ We love getting asked that. But then we would get our least favorite question, which isn’t even a question, ‘You boys are just so brave.’ What the hell are we doing that is so brave? You wouldn’t tell Jerry Seinfeld he’s brave. We are just performing. We want you to think of us as a comedy troupe that does Aspie-centric comedy, not as this pity party.

Is that where you got the idea to sell T-shirts that say, “I don’t want your pity”?

Yeah. Very quickly after one of the first articles about us came out, it was, oh God, this is going to be a bunch of people saying you are so inspiring because you’re doing something. What made them think Aspies couldn’t do something? We want you to look at us as comedians, and if you like it or don’t like it, that’s fine, but if you just come here and say it’s cute or inspiring, that’s offensive. Don’t treat us as baby animals. If you think it’s funny, great, and if you don’t, we’re happy to have you secretly killed in your sleep.

How would you define the group’s sense of humor?

A lot of wordplay. We’re really interested in absurdism. All four of us agree that there’s this common cliché that something is funny because it’s true, and we disagree with that 100 percent. It’s nothing true is funny. The only thing that’s funny is like when I said, ‘If you think it’s funny, great, and if you don’t, we’re happy to have you secretly killed in your sleep.’ That’s funny because it’s not true; if it were true, it would be terrible. That’s how we look at a lot of observational comedians; they are talking about something that is sad or making an interesting observation, like Bill Hicks. We like absurdism and wordplay and a lot of nudity.

Anything else you want to add?

I am really grateful to BU. I’m happy I got to live in the dorms and meet people who required me to learn to live with other humans. I think that was a good experience in a lot of ways. I miss the absolute safety of BU. I never felt more stable in terms of my environment, where I literally never had to worry about anything. In some ways that wasn’t enough to teach me about the world, but in other ways it was a great experience.

Asperger’s Are Us Plays at Somerville Theatre Tonight