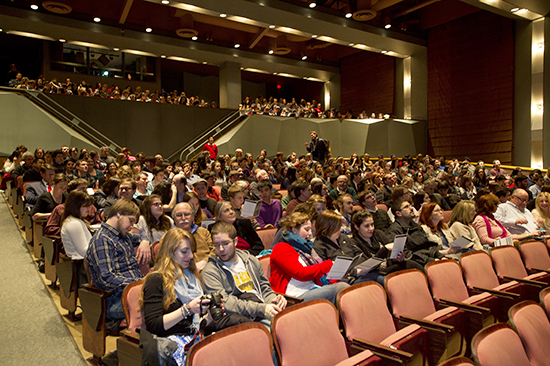 The annual Redstone Film Festival draws standing room only crowds, so plan to arrive early for a good seat. Photo by Vernon Doucette

Tonight could be the night Wes Palmer becomes an award-winning filmmaker. His film You Are Here is one of six competing for best picture at the 36th Redstone Film Festival, which annually screens outstanding work by College of Communication filmmaking and screenwriting program students and recent alums.

Palmer’s film about sneaking into a mall to live inside a model RV was a labor of love, the result of a year-and-a-half collaboration with classmate Luke Shields (COM’14), the film’s screenwriter.

“The story’s changed massively since that first draft, but the fundamental inspiration remained the same,” says director Palmer (COM’16). “I asked Luke if he’d let me direct You Are Here and after many, many rewrites and several months of late nights sending drafts and notes back and forth, we’ve finally arrived at the film we’ll be screening at the festival.”

Other festival finalists are Emily Sheehan (COM’15), who made Adaptation, a documentary that explores the process of the ancient Chinese art of batique, or tie-dye, and its place in today’s world; Dan Behar (COM’16), whose mockumentary-style film Jump is about competitive jump roping; Sara Robin (COM’15), director of Listeners, a futuristic sci-fi film about two friends combating the government’s use of mind reading; Tara Kavanaugh (COM’16), who directed More, the story of a young woman struggling with relationship boundaries; and Anneliese Scheck (COM’15) whose film Postal is about a mailman who falls in love with a woman with agoraphobia, an anxiety disorder that can cause panic attacks and social withdrawal.

All of the works were originally created for a COM film, television, or video production class or as a graduate thesis project. The finalists and winners are chosen in a two-step process. First, a committee of production, screenwriting, and film-studies graduates whittles down the submissions to a list of finalists, and then another panel of film industry professionals weighs in on the winners. Canon DSLR camera equipment, Avid editing software, ProTools sound software, and MacBook Pro computers will be among the festival’s prizes.

The annual Fleder-Rosenberg short screenplay contest winners will also be announced at the festival. Sponsored by screenwriters Gary Fleder (COM’85) and Scott Rosenberg (COM’85), the contest gives out three prizes: $1,500 to the first prize winner, $1,000 to the second prize winner, and $750 to the third prize winner, all of whom must be currently enrolled film and television majors or minors.

As well, the Adrienne Shelly Production Grant will be awarded tonight. The $5,000 grant goes to a female director from the Adrienne Shelly Foundation, established in honor of producer, writer, and actress Shelly (COM’87), best known for her film The Waitress, who was murdered in her New York City apartment a decade ago. A musical adaptation starring Tony-winner Jessie Mueller opens next month on Broadway.

This isn’t Sheehan’s first Redstone appearance—she walked home with the third place prize last year for her film After, a fictional story about the choices made during an affair. Last summer, she participated in the Looking China Film Program, a joint program between BU and Beijing Normal University: BU student filmmakers spend two weeks in China, and are paired with Chinese peers to produce a film together.

“Due to the nature of the Looking China program, when you first arrive in China, you have a vague idea of what you’re going to do, but nothing is entirely set in stone,” Sheehan says. “In my case, I knew that I wanted to study some kind of hands-on process that involved the focus and attention of a dedicated individual.” Working with her Chinese coproducer, Sheehan zeroed in on a real-life mother and daughter dedicated to preserving the ancient art form of batique despite waning interest and challenges from contemporary society. She says the two-week production schedule was intense, enjoyable, and successful—and it’s giving her another chance at a Redstone prize.

Kavanaugh, a grad student in COM’s cinema and media production program, was thrilled when she learned her film was chosen for the festival. “To me, success means that people watch the film, connect, and gain a deeper understanding of those around them,” she says. “Being selected makes me feel like there are people who have connected with this film, and it also gives an opportunity for more people to see it.”

The 36th annual Redstone Film Festival is tonight, Friday, March 18, at 7 p.m., at the Tsai Performance Center, 685 Commonwealth Ave. The event is free and open to the public. BU Today will publish a story about this year’s winners on Monday, March 21.

The Boston Redstone Film Festival will be followed by a Redstone festival in Los Angeles on April 7.